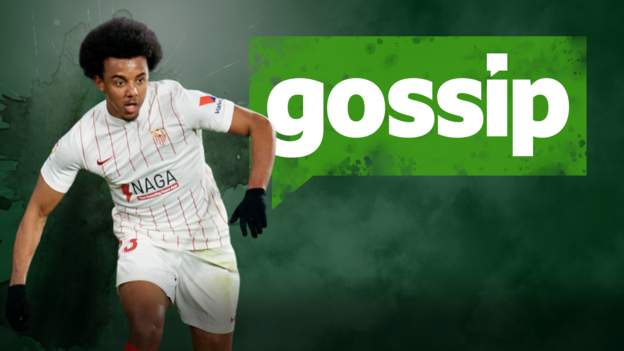 Leicester boss Brendan Rodgers says the Foxes have to be realistic about the future of their Belgium international midfielder Youri Tielemans, 24, who has entered the last 18 months of his contract and is interesting Arsenal and Manchester United. (Metro)external-link

Arsenal are considering a summer move for Chelsea forward Armando Broja, 20. The Albania international is currently impressing on loan at Southampton. (Football London)external-link

Barcelona hope to fend off interest in Spain midfielder Gavi, 17, and Uruguay defender Ronald Araujo by agreeing new contracts with both players. Liverpool and Manchester United are both chasing the 22-year-old Araujo. (ESPN)external-link

AC Milan and Portugal forward Rafael Leao, 22, is wanted by Arsenal and Newcastle in the summer. (Fichajes, in Spanish)external-link

Mauricio Pochettino is considering leaving Paris St-Germain this summer after falling out with senior figures at the club. (Goal, in French)external-link

Manchester United are interested in signing Borussia Monchengladbach defender Ramy Bensebaini, 26, and view the Algeria international as a possible replacement for their England left-back Luke Shaw. (Fichajes, in Spanish)external-link

Pep Guardiola wants Raheem Sterling, 27, to sign a new Manchester City contract but says the club will make the final decision on the England forward’s future. Sterling’s deal runs until June 2023 and he has said he is open to a move abroad. (Guardian)external-link

West Ham had exchanged paperwork with Atalanta to sign Colombian forward Duvan Zapata, 30, before the deal fell through in the final hours of deadline day. David Moyes’ side have been left with just one recognised striker in Michail Antonio. (ESPN via Football Italia)external-link

Study finds psychedelic mushrooms can be used to treat...

Mr. President, Stay Out of Ukraine

Closest supermoon of the year to appear in sky

How to stop Colts’ QB carousel: Draft blue-chipper in...

Crime could be a deciding issue for Wisconsin voters

Rail strike: Only half of train network to be...

Barbershop owner gunned down and murdered while cutting 8-year-old...

Covid: Scottish exam changes continue and no sharing of...

More than a million women have left the workforce....

Kid Rock says he won’t show up at any...

Watch Live: Outside witnesses testify on final day of...

Fiona Hill: ‘Elon Musk Is Transmitting a Message for...

All the ways Putin’s invasion is convulsing markets

Icahn Sues Mortgage Collector for Being Slow to Sell...