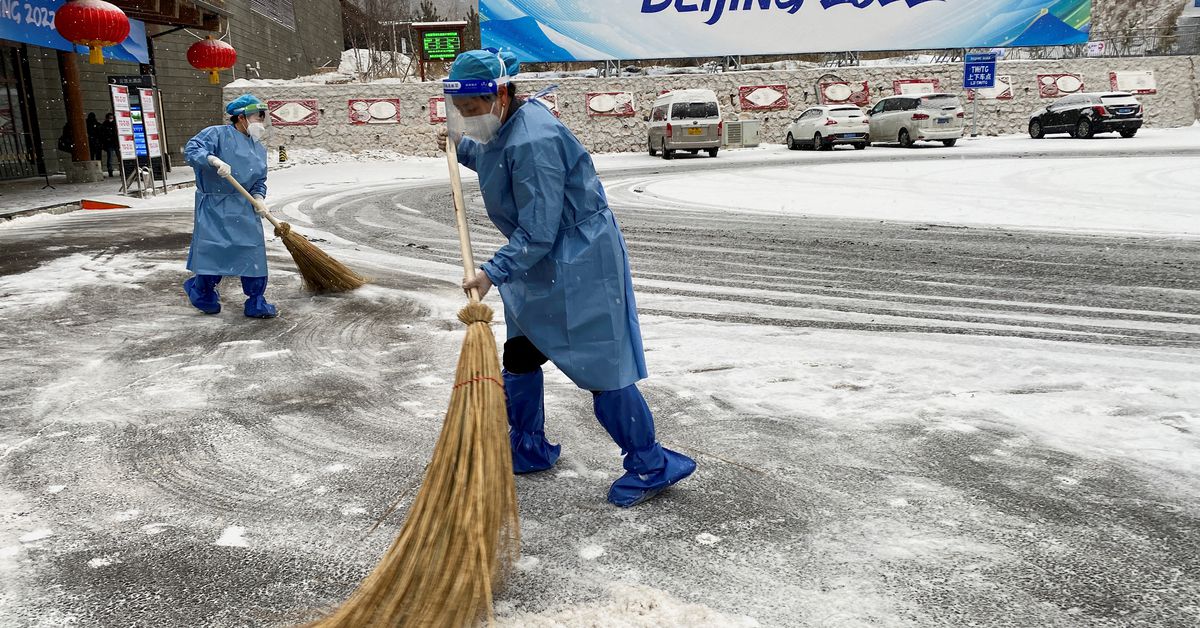 ZHANGJIAKOU, China, Feb 12 (Reuters) – While athletes have been competing on artificial snow throughout the Beijing Olympics, organisers are now dealing with the logistical challenge of clearing away the real thing after heavy snowfalls in the mountains of Zhangjiakou on Saturday.

Brown scrub and brush on the hills around some of the mountain venues have made for underwhelming TV images during the Games but the snowfalls have blanketed the area white, while posing some issues for crews at local venues.

“In heavy snow weather, one must not wait, it’s a process of clearing as it snows,” Shu Wen, deputy director of maintenance services at the Genting Snow Park, told reporters.

“It’s all about preventing the use of snow-melt agents.

Genting is the location for many of the freestyle skiing and snowboarding events at the Beijing Games, where a sound, predictable surface is a requirement for the breath-taking tricks and high-speed racing of the athletes.

Weng said his team are prepared for the heavy snow and freezing temperatures forecast for the middle weekend of Olympic competition.

“According to the weather forecast, we’re expecting a blizzard today and tomorrow, and heavy snow,” Weng said. “This situation happens frequently in our snow venue operations. We have a professional, top-tier team to make sure all goes well.”

Early on Saturday, teams of professionals and volunteers were out clearing snow from the venues ahead of the day’s events.

The opening races at the nearby cross-country and biathlon centres took place in temperatures lower than -10 degrees Celsius (14°F), and gusty winds made shooting on the biathlon range very difficult.

Temperatures climbed during the week but are set to drop again.

After occasional delays in some of the Alpine skiing and ski jump programs due to high winds earlier in the Games, Wen is confident that organisers can handle whatever the weather throws at them.

“This year, we are all set in our mountain venue team with additional machinery and manpower to ensure that we can face any strong winds situations that we can encounter, that at any time we can ensure the normal progress of our events,” he said. The unsung heroes of January 6

Whip rules: Jockeys to be disqualified for serious breaches

Rents rising across the U.S.

Colombia tells Mexican leader to butt out of president...

Democratic Party has gone too extreme on abortion: Pro-life...

Ukraine Is Poised to Get Backing of EU States...

Every day is Memorial Day at Dover Air Force...

Robocalls Are (Finally) Being Shaken Up

GXO Logistics Plans to Buy U.K.’s Clipper for About...

This Instant Pot alternative from Ninja is back to...

Ukraine-Russia crisis: What to know about the fears of...

‘I need to be prepared’: The young people fighting...

Ethiopia’s Tigray conflict: The beauty queen who risked her...

Japan’s Kishida Orders Restart of Up to Nine Nuclear...

Asian shares advance on back of rally on Wall...

Foodie Guide May the 4th and Beyond: Explore Galactic...