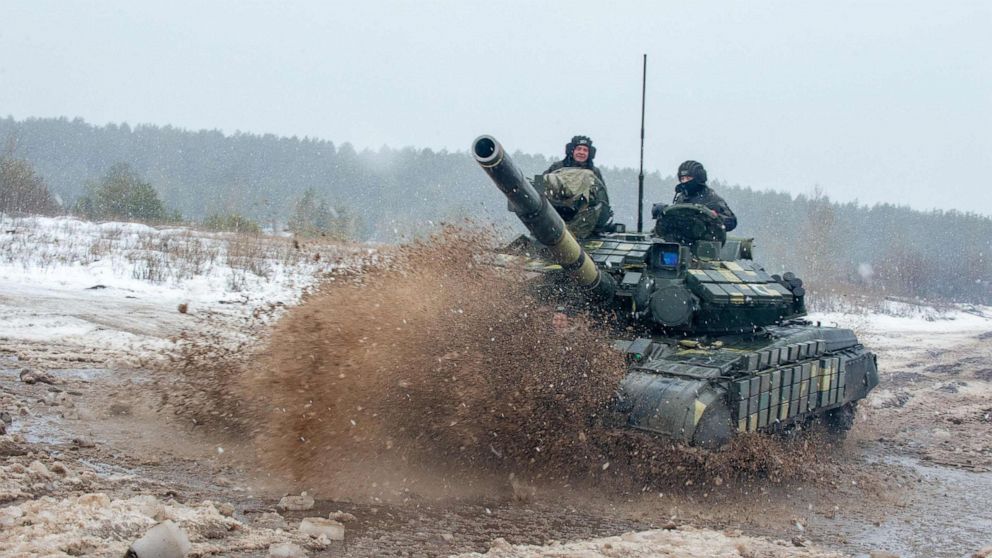 The U.S. issued a stark new warning Friday that a Russian invasion of Ukraine could begin during the Olympics.

“I do want to be clear: it could begin during the Olympics despite a lot of speculation that would only happen after the Olympics,” scheduled to end Feb. 20, national security adviser Jake Sullivan told reporters at the White House, but he quickly added that the U.S. could not say whether Russian President Vladimir Putin had made a decision to do so.

Sullivan also said the situation had grown so dire that Americans in Ukraine should leave “immediately” — within the next 24 or 48 hours.

“If you stay you are assuming risk with no guarantee that there will be any other opportunity to leave, and there is no prospect of a U.S. military evacuation in the event of a Russian invasion,” he said.

Sullivan said the U.S. is reducing the size of its “embassy footprint” in Kyiv.

Pressed by reporters about the evidence the U.S. had, Sullivan there is a “credible prospect Russian military action will happen even before the end of the Olympics.”

Earlier Friday, President Joe Biden held a call with transatlantic leaders to chart next moves as talks over Russia’s military build-up near Ukraine showed no sign of defusing the crisis.

Biden spoke about “coordination on both diplomacy and deterrence” with the leaders of Canada, France, Germany, Italy, Poland, Romania, the United Kingdom, NATO, the European Commission, and the European Council, according to the White House.

The president has remained largely silent on Ukraine over the past few days, instead holding public events focused on the U.S. economy.

The transatlantic call came as NATO warned Europe was facing a “dangerous moment.”

“This is a dangerous moment for European security,” NATO Secretary-General Jens Stoltenberg said Friday in Brussels.

European leaders have engaged in intense diplomacy with Russia and Ukraine over the past several weeks to avoid war in eastern Europe. But the talks have so far failed to yield much apparent progress.

France’s President Emmanuel Macron traveled to Moscow to meet with his Russian counterpart, Vladimir Putin, before meeting with Ukraine’s President Volodymyr Zelenskyy in the Ukrainian capital, Kyiv, the next day.

Russia and Ukraine held talks Thursday in Berlin, moderated by Germany and France, but after nine hours of discussion failed to even agree on issuing a joint statement.

Western officials had hoped that the latest round of the so-called “Normandy Format Talks” would push forward the diplomacy by Macron and other officials who have been shuttling between capitals over the past couple weeks.

The sides remained at an impasse, though, over Russia’s insistence that the Ukrainian government speak directly with Russian-backed separatist leaders in eastern Ukraine.

Biden said Monday that Americans currently in Ukraine should leave, and on Thursday, he repeated that message with more urgency.

“American citizens should leave now,” Biden Thursday said in an interview with NBC News. Its not like were dealing with a terrorist organization. Were dealing with one of the largest armies in the world. Its a very different situation and things could go crazy quickly.

Senior U.S. officials say they do not believe Russia’s President Vladimir Putin has made a decision whether to invade Ukraine, even as he has amassed over 100,000 troops on Russia’s border with Ukraine.

The U.S. and other Western nations have warned of severe economic consequences to Russia if it does invade. Russia denies it plans to do so.

Meanwhile, on Thursday, Russia and Belarus kicked off 10 days of joint exercises in Belarus, north of Ukraine.

“As we said before, we’re in a window when an invasion could begin at any time,” Secretary of State Antony Blinken said Friday in Melbourne, Australia. “To be clear, that includes during the Olympics.”

The Winter Olympics, which are ongoing in Beijing, are scheduled to end on Feb. 20.

Proposals unveiled for redesign of George Square in Glasgow

Why Premier League teams are flocking back to Asia

See where abortion bans are in effect and where...

‘Living fortress’ dinosaur was lonesome, sluggish and hard of...

Orlene expected to be hurricane off Mexico’s Pacific coast

Ukraine preparing for “massive attack in the east,” ambassador...

Eric Reed Is Off To The Races

Airline SAS will get no more cash from Swedish...

Intel Arc desktop GPU launch could be imminent (but...

Nvidia could beat AMD in battle of next-gen GPUs...

On The Money — Democrats search for plan on...

Police: Man who died in lake with gators missing...

More countries consider breaking away from the crown following...

These Are the Big Questions Facing the Video Game...

Lavrov in Turkey to discuss plan to ship Ukrainian...

Wi-Fi 6E: everything you need to know about the new wireless network

A46: Four murder arrests after two die in crash