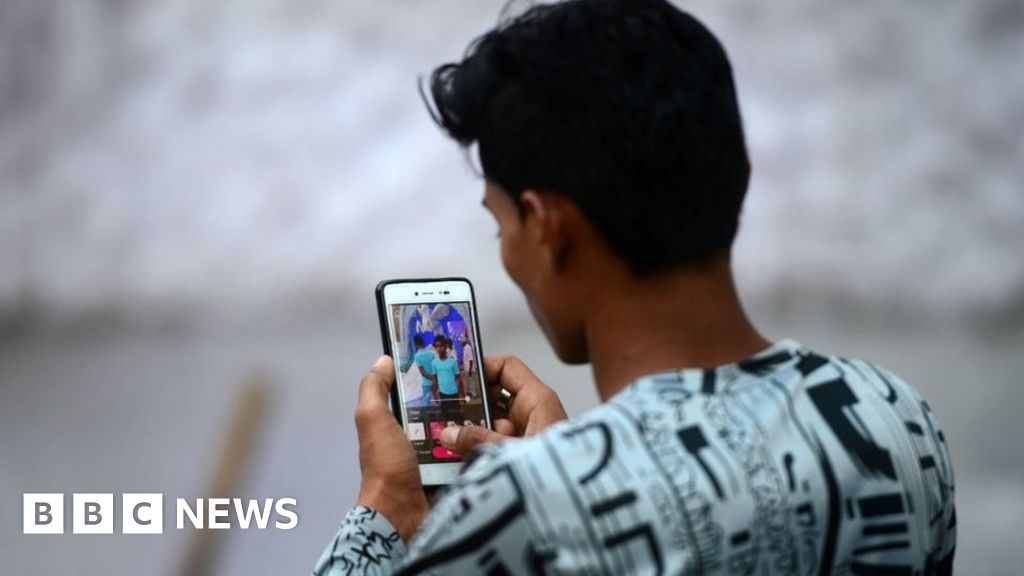 In May last year, as Muslims around the world celebrated Eid al-Fitr, several women in Pakistan got a shock.

Screenshots of photos they had posted of themselves, dressed up for the festival, were livestreamed without their permission on YouTube by two men across the border in India.

The livestream, by Ritesh Jha and an accomplice he calls “Keshu”, was accompanied by misogynist, Islamophobic comments and watched by hundreds.

After several users reported the stream, YouTube removed the video and the channel. The women later said they felt “unsafe” and “afraid” and that their Eid had been “ruined”.

Eight months on, Mr Jha, 23, says he was “filled with hate at that time”. He claims he wanted to avenge Hindu women whose morphed photos he had spotted on social media. He did not reveal any details about Keshu.

Trolling of women – especially those critical of India’s Prime Minister Narendra Modi and his governing Bharatiya Janata Party (BJP) – has worsened in recent years amid an increasingly polarised climate both online and offline.

While supporters of all political parties and ideologies harass women online, experts say a churn in the far-right and the spread of technology has emboldened young Hindu nationalists further.

The YouTube livestreaming incident was followed by several cases of women being abused online.

Developers of two apps shared photos of Muslim women in a mock “auction” meant to humiliate them. Hindu women critical of Mr Modi and the BJP were also put on a fake “sale” on audio app Clubhouse, which said it has since suspended the room and taken action against accounts connected with it. In all three cases, there was no actual sale.

After a sharp public outcry, police arrested nine people in connection with both apps – all between 18 and 26 years old. Most were active in social media groups where Islamophobic messages were regularly posted.

Mr Jha too has been named in a police complaint in connection with the Clubhouse mock auction and the Youtube livestream incident, a senior police official told the BBC.

“We are investigating the case and will take necessary legal action against him if he does not present himself,” Rashmi Karandikar, cybercell chief of the Mumbai Police, said.

Experts say these are not isolated incidents.

“I would attribute this to a sweeping radicalisation of the Hindu middle class,” says journalist and author Snigdha Poonam.

He justifies the offensive jokes targeting Islamic practices as “dark humour”. He also compares the livestreaming of the women’s photos with “harmless videos on TikTok or Insta Reels”.

Mr Jha was 14 when he got his first smartphone. He says the content he accessed then was his introduction to the right-wing world.

“On it, I saw memes, heard speeches of politicians who screamed that Hindus were in danger,” he says.

The partisan political debates and toxic narratives that identified Muslims as the enemy slowly turned him into a “radical”, he says.

“You start to feel you are being discriminated against, so much so you begin thinking of violence,” Mr Jha says.

This is likely to affect more young people, experts say.

“The pandemic has also created a febrile environment for radicalisation, by ensuring that millions of people have spent more time online,” says a study by Canada’s Institute for Strategic Dialogue, which studies online behaviour of right-wing extremists in the country.

India’s right-wing is also going through changes – many now divide themselves into two groups: “trads” and “raytas”.

Trads, or traditionalists, have more extreme views and believe the BJP is not right-wing enough. They call their critics on the right “raytas” – a play on the Hindi idiom “rayta phailana”, which broadly means to mess things up.

Raytas say they prefer to express their views without espousing violence.

Abhishek Banerjee, a right-wing columnist, says this is similar to divisions among those on the left.

“As the right’s position has become influential in politics and power, they are becoming more vocal and visible,” he adds.

Trads – more right than the right

A young Dalit man, who only wants to be referred to as HR – the initials of his Twitter handle – told the BBC how he was drawn into the trad world.

Dalits (formerly untouchables) are at the bottom of an oppressive Hindu caste system.

In March 2020, HR was invited to join an Instagram group whose stated purpose was to “disseminate true information about Hinduism”. The person who invited him said he was impressed by HR’s skill at arguing “with Muslims online”.

HR says he was happy to join because he was “proud” of the Hindu faith, but was soon disillusioned by the incessant hate members spewed – not just at Muslims but also Dalits.

“They believed Dalits were not Hindus, that it was okay to rape Muslim women to build a Hindu India and that even the murder of children could be justified,” he told the BBC through messages on Twitter.

HR never disclosed his caste identity to the group and left it six months after he joined.

He says he now “fights” against trads by reporting their social media handles.

Image caption, Experts say the excessive trolling is the result of a radicalisation of the Hindu middle class

“Trads praise lynching, oppose both Muslims and Christians, believe in the oppressive caste system, and hate all outspoken modern women, whether Hindu or Muslim,” says writer Saniya Sayed, one of the women whose photos were uploaded on the fake auction apps.

Ms Sayed says she was often added to trad groups online by her harassers so she could see the objectionable comments they made about her.

Delhi Police have said that the man who allegedly created the fake auction app was part of a trad group.

Mona Sharma, who calls herself a “rayta”, says she and other right-wing women have also been targeted by trads online because they do not conform to their notions of how women should behave.

She was abused online and her husband’s personal information was leaked, says Ms Sharma – she adds that she herself trolls liberals and is subjected to trolling by them on Twitter, but that this is a “harmless” activity.

“For the trads, modern educated women are not Hindu enough,” she says.

Police have had limited success in disrupting this entrenched ecosystem.

“Law enforcement doesn’t have the wherewithal to monitor and track millions of accounts on platforms that are owned by foreign companies,” says Brijesh Singh, a senior Mumbai Police officer.

Ms Poonam believes the radicalisation of Hindus is a grave danger to India’s secularism.

“When I am out reporting, you would be surprised at how many times ordinary people keep bringing up Pakistan as a model for India to follow,” she says.

“There is a strong feeling among a large section of Hindus that India should be for the Hindus, and they feel freer to express it today,” she adds.

Mr Jha tells the BBC his actions were “morally wrong” but says people like him are being “used”.

“We don’t realise how hatred takes root in our mind. It doesn’t benefit anyone, except those who are running a hate agenda.”

FTX’s Demise Shows the End of the Crypto Bust...

Attack on Florida’s Scrutiny of Textbooks is More CRT...

Palestinians mourn boy who died ‘of fear’ of Israeli...

Kooply taps into $18M from Microsoft and more for...

Investigative report into the Uvalde elementary school shooting could...

Investigation: No retaliation against COVID-19 whistleblower

Hearts squeeze through on penalties in the Scottish Cup

The NBA redesigned its app for the TikTok era

Attorneys clash over references to Trump as closings wrap...

Will Dems put their money where their mouth is?

Brittney Griner Makes Direct Plea to Biden for Her...

Sarah Huckabee Sanders: If I had Tried To Redefine...

Medford man arrested in connection with attempted break-ins near...

A dizzying 24 hours for UK politics… in under...

Feel what it’s like to raise a trans child...

Utah QB Cam Rising bounces up after getting obliterated...

Mobileye and Zeekr plan to build an autonomous EV...

Transfer window closes: Some of the best signing announcements

Oregon man takes own life after misfire at bear...

EU and US agree data transfer deal to replace...

The utility executives who presided over California’s historic wildfires...

Did no one tell Europe the party is over?...

Bradley Wiggins Says He Was Sexually Groomed by a...

Opinion | How Trump Flushed the Presidential Honor System Down the Toilet