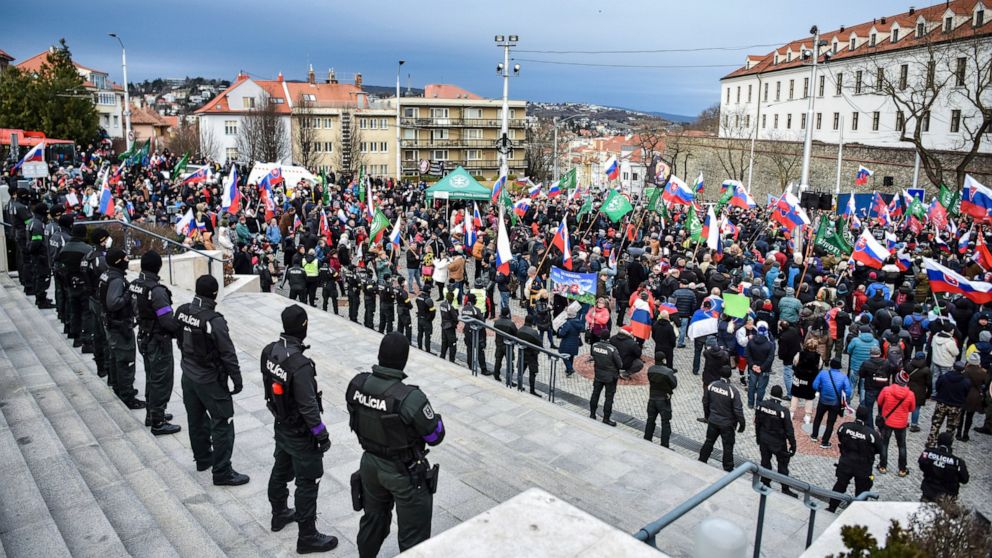 The Defense Cooperation Agreement passed 79-60 in the 150-seat legislature in a vote split between lawmakers from the four-party ruling coalition and the opposition.

The treaty allows the U.S. military to use two Slovak air force bases Malacky-Kuchyna and Sliac for 10 years while Slovakia a NATO member will receive $100 million from the U.S. to modernize them.

The deal was signed by U.S. Secretary of State Antony Blinken and Slovakias defense minister, Jaroslav Nad, on Feb. 3 in Washington. It still needs to be ratified by President Zuzana Caputova, who supports it.

The vote took place amid fears that Russia will invade Ukraine. Moscow has massed more than 100,000 troops near Ukraines borders, but insists it has no plans to attack. Slovakia borders Ukraine.

The treaty has been supported by the government of Prime Minister Eduard Heger, who said it will significantly enhance our security. But the agreement is fiercely opposed by the opposition, which claims it would compromise the countrys sovereignty, make possible a permanent presence of U.S. troops on Slovak territory and even enable a possible deployment of nuclear weapons in Slovakia.

The Slovak and U.S. governments have rejected those charges.

Nothing in todays agreement creates permanent U.S. bases or troop presence in Slovakia, and the agreement fully respects Slovakias sovereignty and laws, Blinken said during Thursdays signing ceremony at the U.S. State Department.

Thousands rallied against the agreement on Tuesday in front of the parliament building when lawmakers were debating it.

The protest united the Slovak opposition, including the far-right Peoples Party Our Slovakia and the leftist Smer-Social Democracy of former populist Prime Minister Robert Fico.

The U.S. has such an agreement with 23 other NATO members, including, Poland and Hungary, two other countries that neighbor Ukraine on the eastern flank of the alliance.

Any particular deployment of U.S. forces still needs approval by the Slovak government and parliament.

The Packers’ playoff flaws popped up like a game...

Samsung’s Galaxy S22 lineup is cheaper than ever for...

Consumers urged to cut energy use this winter

Cost of living: Heineken to put up beer prices...

Mental health issues may lead to higher risk for...

Steve Jobs’ son Reed Jobs has no interest in...

The return to office compromise created a nightmare for...

Rangers mark anniversary of Ibrox disaster with memorial at...

Kora: the ‘sacred’ instrument of storytellers

British writer Lee Child discusses the future of his...

Disney Eats Foodie Guide to Feasts and Treats for...

The Morning After: First impressions of Nothing’s see-through smartphone

In a first, commercial crew docks with space station

Londoners Flock to Rent Bikes With a Bright Blue...

Biden wants to move U.S. past Covid. Here’s his...

Ukraine conflict: US warns Russia of consequences if it...

'We're near to breaking stereotype that top male sport can't have gay...