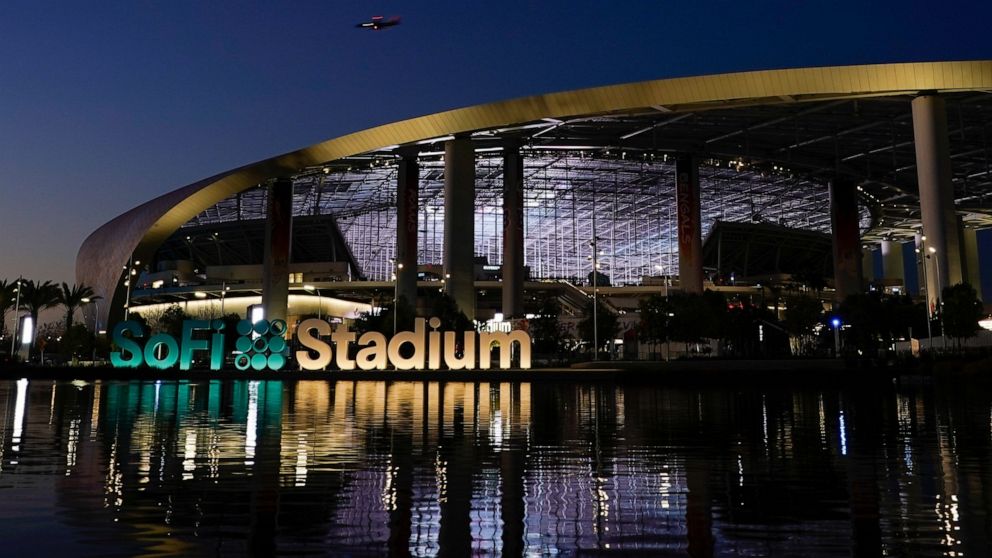 The Super Bowl between the Los Angeles Rams and Cincinnati Bengals on Sunday at SoFi Stadium in Inglewood, California, will as usual be the biggest day of sports broadcasting in the United States. But this year might be the biggest of them all since this is the first time the country’s biggest sporting event is happening at the same time as the Winter Olympics, one of the biggest events in the world.

Here are some things to know about the game as well as Super Bowl-related programming on other networks:

WHICH NETWORK HAS THIS YEAR’S SUPER BOWL?

This marks the 20th Super Bowl broadcast for NBC, which is second among all networks. CBS leads with 21 followed by NBC, Fox (9) and ABC (7).

Of the seven previous Super Bowls held in Los Angeles, NBC has aired four, including the last one in 1993 when Dallas beat Buffalo. CBS and NBC both aired the first Super Bowl, which was at the Los Angeles Memorial Coliseum.

HOW DID NBC GET THIS YEAR’S GAME?

CBS originally had the game this year under the league’s rotation between CBS, NBC and FOX, but NBC and CBS agreed in 2019 to trade spots. CBS carried last year’s Super Bowl from Tampa instead of NBC. CBS didn’t want to compete against the Olympics while NBC could market two major events to advertisers.

WHAT IS NBC’S SCHEDULE FOR SUNDAY?

All times are Eastern:

WHO ARE THE ANNOUNCERS FOR NBC?

Al Michaels and Cris Collinsworth team up for their fourth Super Bowl. Michaels is handling the play by play for the 11th time, which ties him with the late Pat Summerall. This is Michaels’ fifth Super Bowl for NBC after his first six were with ABC. Collinsworth, who played eight seasons for the Bengals and appeared in both of their previous Super Bowl trips, will be an analyst for the fifth time. His first was with Fox for the 2005 game between Philadelphia and New England.

HOW MANY CAMERAS WILL NBC USE FOR THE SUPER BOWL?

Executive producer Fred Gaudelli didn’t want to give exact numbers, but NBC had a total of 106 for its last Super Bowl four years ago in Minneapolis. CBS had 120 last year in Tampa. For the first Super Bowl at the Los Angeles Memorial Coliseum in 1967, NBC had 11 cameras.

Gaudelli did say that in terms of cameras that shoot the game, that actually shoot the field and the play and the players well probably have 40 cameras.” All those cameras will be recorded and can be used for replay.

NBC will also be debuting a brand-new graphic look, a new score bug, as well as utilizing a lot of virtual reality and augmented reality graphics.

Gaudelli and director Drew Esocoff are working their seventh Super Bowl together and fifth on NBC. Their first two were with ABC.

Yes. Mike Tirico is doing double duty. He left Beijing on Monday night to fly to Stamford, Connecticut, to host Olympics coverage Wednesday and Thursday before going to Los Angeles on Friday through Sunday.

Tirico will host the Super Bowl pregame and postgame presentation of the Vince Lombardi Trophy before going to a set outside SoFi Stadium to host Sunday night’s Olympics coverage.

WHAT IF I ONLY WANT TO WATCH THE HALFTIME SHOW?

The first half of a normal NFL game usually takes 90 minutes, but if there are a lot of running plays, it could be done in 1 hour, 10 minutes.

HOW CAN I WATCH THE GAME IF I AM A CORD CUTTER?

NBC’s Peacock streaming service will have the game for OTT devices and services, smart TVs and mobile devices. It will also be available for free on the NFL website/apps as well as Yahoo Sports. DirecTV Stream, Sling TV, Hulu with Live TV, YouTube TV and fuboTV also have NBC.

WHO HAS THE SPANISH LANGUAGE BROADCAST?

WILL THE GAME BE ON RADIO?

Sirius XM Satellite Radio will have four channels dedicated to the game the Westwood One national feed, a Spanish-language channel and the Rams and Bengals broadcasts.

Biden warns energy prices could be impacted if Russia...

Author Deanna Singh on how to create an inclusive...

China’s economy had a surprisingly good start to the...

Investigators are determining if a child under 5 years...

The Cityhood Movement Is Defeated in Metro Atlanta

Google is spending millions to help you move your...

The Fed is about to make history again

Myanmar OKs use of Thai currency in border trade

‘Winning Time’ Season 2: Everything To Know About the...

The James Beard Award 2022 winners are …

The Situation at Chernobyl Is Deteriorating

Trudeau's own party is starting to turn on him over Covid restrictions
Democrats go after Big Oil climate pledges, calling them insufficient