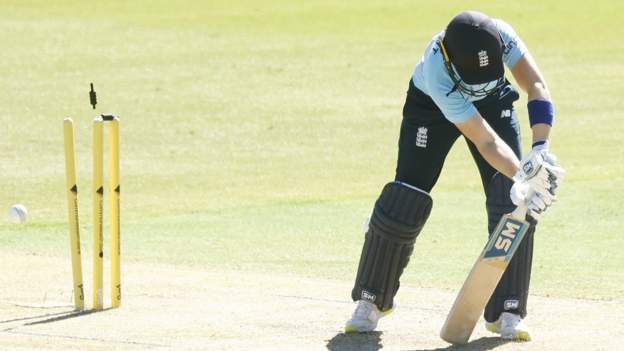 England’s Ashes campaign ended with another crushing defeat by Australia in the final one-day international in Melbourne.

The tourists, who had already lost the series, collapsed again to 163 all out before Australia cantered to a eight-wicket victory with 13.4 overs to spare.

Debutant Emma Lamb was bowled for a second-ball duck and captain Heather Knight was castled by a Tahlia McGrath yorker, leaving England 19-2.

Tammy Beaumont and Nat Sciver rebuilt with a partnership of 88 but did so cautiously and when Beaumont fell for 50 from 101 balls England were 107-3 in the 35th over.

Beaumont’s wicket sparked a sorry slump as the last eight wickets fell for 56 runs, the innings ending after 49.3 overs.

Australia raced to 74-0 in their chase before Alyssa Healy, dropped by wicketkeeper Amy Jones on 24, was caught off a leading edge for a 56-ball 42.

Fellow opener Rachael Haynes fell in the next over without progressing the score but captain Meg Lanning with 57 not out and all-rounder Ellyse Perry’s unbeaten 31 blunted any hope of an England fightback.

The tourists briefly flickered into life during the drawn Test but they have otherwise been outclassed in the series – Australia unbeaten, ending 12-4 winners on the points-based system.

England’s only points came in the draw and two wash-outs meaning they end the series without a win, the first time that has happened in a multi-format Ashes series.

It also means England’s women’s and men’s sides have played 12 matches in Australia this winter and won none.

Worryingly, England, who failed to bat out their overs for the third successive match, now look a batting side bereft of confidence.

With the Ashes gone, attention has turned to preparing for their World Cup defence which begins in 26 days in New Zealand, but Lamb replaced the out-of-form Lauren Winfield-Hill and missed a straight ball from Perry in the second over.

Overall it was a curious, conservative batting effort from England.

England were 80-2 after 30 overs, their lowest total at that stage of an ODI innings since 2012

After three maidens in the first four overs, Beaumont and Sciver showed minimal aggression in their partnership with only four boundaries in the first 30 overs and little rotation of strike.

Beaumont hit left-arm spinner Jess Jonassen for a six in the 31st over – the first flash of attacking intent – but her dismissal, caught at mid-off off leg-spinner Alana King, set in motion a familiar collapse.

Her fifty was her slowest in ODIs and the stand with Sciver, during which they scored at 3.5 runs per over in 152 balls, piled too much pressure on those who followed to accelerate.

Danni Wyatt was promoted to number five in an attempt to up the ante but was caught at deep extra cover. Sciver fell lbw to a Megan Schutt inswinger on review for 46 and the lower-order followed in a procession with Charlie Dean the only other batter to make double figures with 18 not out.

England head to New Zealand, where they must quarantine for 10 days before the World Cup, with plenty to ponder.

In contrast, Australia have only strengthened their position as overwhelming favourites for the World Cup with three dominant ODI wins.

Again they showed their fearsome bowling depth, Annabel Sutherland, who was rested for the first ODI, taking 4-31 with Perry, the match-winner from the second game, able to take a back seat with the ball.

Rachael Haynes took a fine diving catch at backward point to dismiss Anya Shrubsole, reinforcing the gulf in the fielding levels between the two sides – a difference shown again later when Jones put down a relatively straightforward chance to dismiss Healy diving to her right.

After England’s struggles, Healy cut the first ball of Australia’s chase for four. Australia flashed past England’s powerplay total of 19 after just 20 balls, having none of the difficulty scoring England did.

Healy made two ducks in the one-off Test but looked to be finding form before falling to Freya Davies, having brought Australia’s target within 100 by capitalising on the width regularly provided by her opponents.

Seamer Davies, recalled with Katherine Brunt and Kate Cross managing niggles, was the only England player to come out of the game having advanced their cause for selection.

Australia could have eased home after the loss of their openers but, after briefly playing themselves in, Lanning and Perry stamped their authority with a stand of 90, Lanning winning the game with a towering six.

‘Not a reflection of us as a side’ – reaction

England captain Heather Knight: “The way we started the series with the bat was outstanding. We will be a bit frustrated there were a few opportunities missed. The last two games aren’t a reflection of us as a side. We were a bit fatigued and a bit tired.

“Bar today our bowling has been in a really good place. We are looking forward to getting to New Zealand and starting again.”

Australia captain Meg Lanning: “We have had so many contributors. That holds us in good stead moving forwards. Today was a complete performance with bat and ball.”

Former England spinner Alex Hartley: “That was the most comprehensive win of them all. England came out and made it look like they were batting on a really tricky wicket. They just didn’t have enough runs on the board. Australia played aggressive cricket, lost two wickets but with the skill of Lanning and Perry were able to rebuild.” USC’s Caleb Williams is putting on a Heisman-worthy show...

Atari collaborates with Cariuma to create a 50th anniversary...

The U.S. is officially in a flu epidemic, federal...

Global Cooperation on the Amazon’s Protection Set to Resume...

How well do you know the show?

I Keep Going Back to One Video From Ukraine

Trump’s PAC will fund his Smithsonian portrait, in an...

No, you’re not going crazy – package sizes are...

TikTok is cutting jobs around the world

At least six people were killed during Fourth of...

Balance of Power: Who Will Lead the Democratic Party?...

Whoopi Goldberg suspended from ‘The View’ over Holocaust comments

Inside Russia’s attempt to destroy Ukraine “with darkness and...