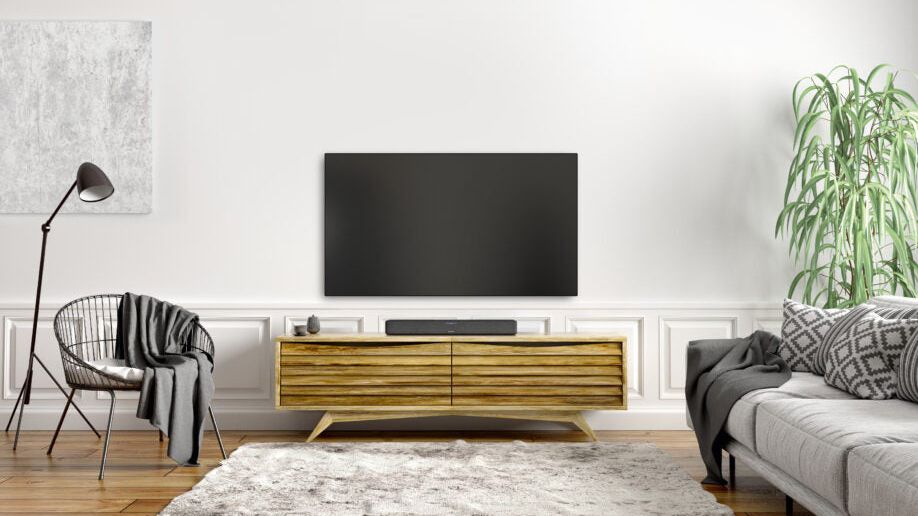 Denon believes the Home Sound Bar 550 will  make your dreams come true – and, to some extent, it can. It’s a compact, well-specified soundbar whose looks are quite understated but its sound is anything but. Offering plenty of connectivity options, a thoroughgoing specification (including hi-res audio ability and some processing wizardry to deliver a sense of spatial audio) and a genuine facility as a music speaker… it all looks pretty good on paper, doesn’t it? Well, it sounds good in action, too. Up to a point.

So long as you keep your expectations over object-based audio and volume levels realistic, there isn’t too much to complain about here. The sound the Denon serves up is tall and quite wide, so while it’s about as true to Dolby Atmos as the aforementioned Sonos (which is to say, not much at all), the Home 550 is an engrossing and entertaining listen. However, chance an arm where volume is concerned and things quickly get out of hand – the Home 550 quickly bares its teeth and can become quite aggressive.

This, as anyone with even a passing interest in the soundbar market knows, is Sonos Beam (Gen 2) territory. As our review makes plain, the Sonos is far from perfect.

However, a combination of decent performance and the company’s usual impeccable ergonomics put it near the top of the list of alternatives. All of which means that Denon’s 110+ years of expertise might count for less than you might at first imagine.

It’s a soundbar. You don’t want it to draw attention to itself, do you? After all, it’s going to sit close to your TV, where the real action will be.

As such, Denon’s family ‘Home’ look is ideal. The Home 550 is low profile, discreet and usefully compact in the manner of the Sonos Beam (Gen 2), measuring just 75 x 650 x 120mm. It’s ideal for anyone with a TV between 40 and 55 inches. Build quality is decent, even if the plastics don’t feel like anything special, and the dark grey acoustic cloth extends to both sides of the enclosure. Look, rather than touch, and with the Home 550 you appear to be getting your money’s worth.

On the rear is a cutaway where all the physical connections live – and the Denon is more useful and flexible in this regard than the Sonos it wants to usurp. Like the Sonos, the Home 550 includes the HDMI eARC necessary to accept a top-tier soundtrack from your TV; but there’s a second HDMI, too, which is useful if you’re running short of HDMI inputs on your television.

The HDMI sockets support 4K, HDR10 and Dolby Vision – and they’re accompanied by a digital optical input, an Ethernet socket, a 3.5mm analogue input and a USB socket. Add in dual-band Wi-Fi, Apple AirPlay and Bluetooth (‘just’ 3.0, admittedly) for wireless connectivity, and it’s difficult to lay a glove on the Denon for how it’s equipped.

No matter the method you use to get your audio information on board, the Home 550 is ready to deal with file sizes up to 24bit/192kHz, alongside DSD5.6 and Dolby Atmos and DTS:X; if you want to treat your soundbar as a hi-res audio player, too, then go right ahead. Decoded audio is then served up via a couple of 19mm tweeters, four 55mm full-range drivers, and three ‘racetrack’ (50x90mm) passive radiators.

None of these drivers faces upwards, though. Just like the Sonos Beam (Gen 2), the Denon Home 550 relies on elaborate processing to deliver the sonic height and width that’s the whole point of a spatial audio soundtrack.

Like most Sonos speakers, the Beam (Gen 2) puts meaningful distance between itself and its nominal competition where control and usability are concerned – but the Denon Home 550 is better equipped for the confrontation than most. Between a small-but-comprehensive remote control, Amazon Alexa voice control and an extremely brief suite of buttons on a proximity-sensing panel on top of the ‘bar itself, it’s simple to get the Home to follow through on your instructions. And in the HEOS app Denon shares with its sister company Marantz, it’s possible to integrate numerous music streaming services, access internet radio and network-attached storage, and indulge in a little EQ adjustment…

Let’s first deal with the Home 550 performance at volume levels we’ll describe as ‘normal’. At this volume – the sort of level you might think acceptable for enjoying a movie in a fairly standard-sized room – the Denon has plenty to recommend it.

By the standards of soundbars operating without the aid of a subwoofer, it delivers impressively deep, nicely textured and quite informative low frequencies. The punch that the Dolby Atmos soundtrack to Blade Runner 2049 demands is just about present, and the bass the Home 550 serves up is well controlled, acceptably detailed and properly straight-edged where the attack and decay of individual sounds is concerned.

There’s similar organization and control evident at the opposite end of the frequency range, where treble sounds are bright and substantial. The same level of straight-edged control is evident, as are the levels of finer detail. And in the mid-range – arguably even more important to a movie soundtrack than it is to a piece of music – the Denon projects voices well ahead of the main stage, while continuing to integrate them smoothly into the overall performance. Once again, there’s ample detail on display, and the sort of attention to texture and tone that makes voices distinctive and distinct.

Dynamic headroom (in the ‘whispered exposition’ to ‘full-screen explosion’ sense) is more than adequate, and the Home 550 is sure-footed enough to keep its presentation coherent and convincing even when the going gets properly hectic. In fact, the more competing elements there are in a soundtrack, the more the Denon seems to enjoy it.

However, as far as object-based spatial audio is concerned, the Home 550 is a slightly more qualified success. If the Sonos Beam (Gen 2) has taught us anything, it’s that we can’t expect an especially persuasive Dolby Atmos effect from a soundbar without upward-firing speaker drivers. In its defence, the Home 550 is a little more successful than the Sonos in this regard – naturally, it can’t generate a sensation of overhead sound, but there’s appreciable height to its presentation. As far as filling the wall on which your TV hangs with sound, the Home 550 is a deft and cogent listen.

Switch to some music and it’s a similar story. Heard at neighbourly volume levels, PJ Harvey’s To Bring You My Love is a quite burly, properly organised listen, with plenty of prominence to the bottom-end analogue grind and squelch. It isn’t really a match for a similarly priced Bluetooth speaker, but in context it isn’t bad at all. The presentation is cohesive and quite well unified, and the plodding rhythm is handled well.

Problems begin should you be optimistic enough to up the volume. The Denon’s previously assertive but controlled sound takes a decisive turn for the shouty, with the top-end losing composure and the bottom-end sacrificing even more. Finding itself under threat from both directions, the mid-range joins in by becoming hard and edgy. It’s quite a fundamental change of attitude and emphasis – and there’s no guarantee you’ll find this new stance anything other than aggressive.

Should I buy the Denon Home Sound Bar 550?

Sony to Buy Back Stock After Profit Falls Short...

Your Steam Deck may arrive sooner than you think,...

Long-term US mortgage rates edge up this week to...

A year after protests, Cuba struggles to emerge from...

Surgeons successfully transplant kidney from donor who died of...

Two arrested after 10 bodies found in car in...

The American Consumer Is Buckling

US reveals claims of Russian ‘kill list’ if Moscow...

Russia hits back at Western sanctions with export ban

Decrease in Salmon affects killer whales, according to studies

Spirit Airlines will talk to JetBlue about takeover bid