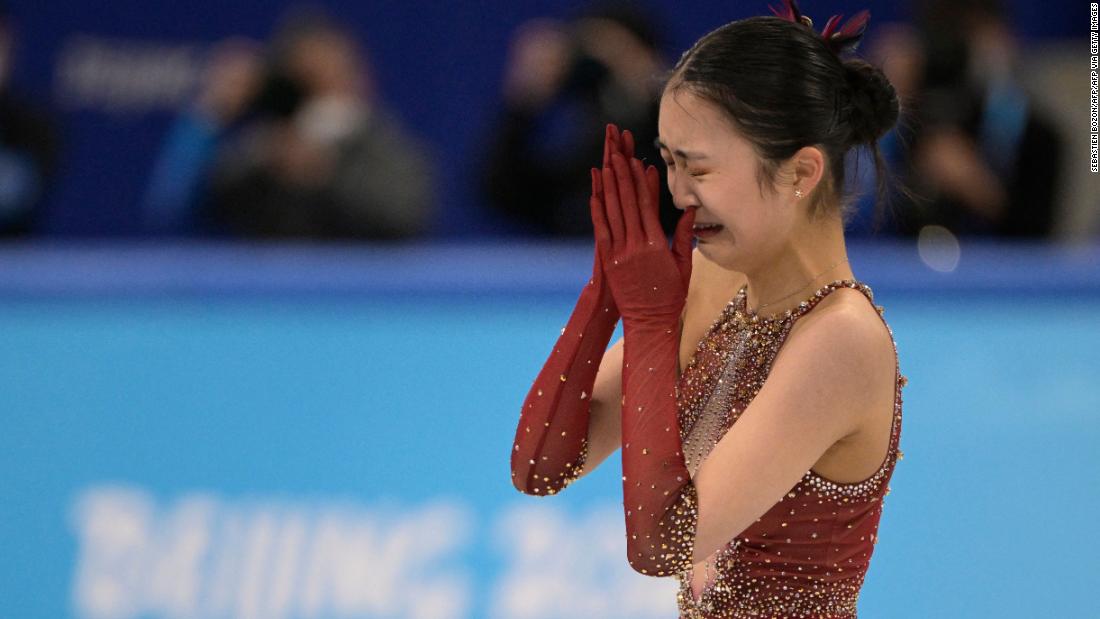 Kara Alaimo, an associate professor in the Lawrence Herbert School of Communication at Hofstra University, is a frequent contributor to CNN Opinion. She was spokesperson for international affairs in the Treasury Department during the Obama administration. Follow her on Twitter @karaalaimo. The opinions expressed in this commentary are solely those of the author. View more opinion at CNN. This piece has been updated to reflect the latest news.

(CNN)Following her debut for Team China, California-born figure skater Zhu Yi is facing a torrent of criticism on social media after she fell on the ice while performing her short program in the figure skating team competition at the Beijing Olympics on Sunday.

The hashtag “Zhu Yi has fallen” was viewed more than 200 million times within hours on the Chinese social media platform Weibo, before apparently being censored. The comment “This is such a disgrace” quickly garnered 11,000 upvotes.

After missing a jump and crashing into a wall and then later missing another jump, Zhu already had to contend with personal embarrassment and the most devastating outcome possible for an Olympic performer: the lowest score of her event. It’s hard to imagine the feeling of failing so dramatically on the world stage.

Despite being forced to contend with such vitriol on social media, she bravely took the ice again on Monday for her long program, where she completed a number of difficult moves — but also fell again. Her team finished in fifth place.

I think it’s a pretty safe bet that Zhu’s worst critic right now is herself. Having to deal with being attacked on social media while suffering a massive disappointment must be excruciating for this athlete.

It may seem obvious to say that social media is the source of a lot of ills — but it’s also worth emphasizing in situations like this that these platforms empower all of us to intervene when a person is being cruelly attacked. And there’s a way we can all react to help rectify the problem: by “positive slamming” her.

Writer Sue Scheff, a parent advocate and internet safety expert, describes this technique in her book “Shame Nation: The Global Epidemic of Online Hate.” She writes, “Sometimes what begins as a shaming can flip, as supporters show you they have your back. This is called positive slamming.”

So today, let’s all take to social media and show our support for Zhu. We should give her credit for putting herself out there and trying her hardest to make her country proud, and for holding her head high on the Olympic ice. We should point out that no one is perfect, and every person has bad days.

And we should express our admiration for the fact that she excelled so phenomenally in her sport that she made it to the Olympics in the first place.

It’s especially important that we all help reverse the tide of social media shaming in cases like this when a person is being excoriated at least partly because of their identity. Zhu was born in the United States, but later gave up her American citizenship and chose to compete for China. “Please let her learn Chinese first, before she talks about patriotism,” one Weibo user posted on Sunday. So it seems these attacks online are about more than dashed hopes about figure skating.

It’s also easy to imagine that part of the reason Zhu is coming under such fire is because of her gender. Women around the globe are especially likely to be on the receiving end of online abuse. Almost 40% of women have been harassed online, according to a study of women in 51 countries by The Economist Intelligence Unit.

Of course, publicly pillorying people who try their best but fall short of their goals isn’t just unacceptably cruel. It also serves as a disincentive for others to take the kinds of risks that are necessary if we want to see our countries succeed — at the Olympics and beyond.

Yet positive slamming can serve as a way of not just redressing wrongs when people come under unwarranted attack, but also changing social norms. In a case like that of Zhu, it can help redefine our society’s conceptions of success and failure. Resilience — or the ability to recover after a defeat — is a skill so valuable that it is linked to everything from better learning to improved health and lower death rates.

And, during a global pandemic when we’ve all been faced with unprecedented challenges in our lives, it’s a skill people need now more than ever.

Positive slamming can also help correct other ugly aspects of our culture. For example, Scheff writes in her book about a Tennessee teenager who was fat shamed on social media after she posted a picture of herself in her prom dress in order to try to sell it to buy a new one. But then, other users responded by flooding her with positive comments and sending her $5,000 in donations — far beyond what she needed to buy a new dress.

Through positive affirmation like this, we as good Internet citizens can also help address the (sometimes disturbing) ways our society passes judgment on women’s bodies.

The heat Zhu is taking right now is not only mean and superfluous (of course she didn’t want to fail). It’s also misguided. If we want people to go for gold — in the world of sport, business, or elsewhere — we have to accept that they won’t win every time, and not shame them when they come up short. Today, we all can — and should — use our social media accounts to send this message loudly to Zhu, and to every other person in the world who is considering putting herself out there to strive for something great. Chevron CEO Warns Not to Count on New US...

The White House diaries and the 7-hour gap in...

Beyoncé’s New Single ‘Break My Soul’ Will Soundtrack Your...

Graduation rates dip across US as pandemic stalls progress

Brenda Edwards: ‘Jamal has left such a legacy with...

Major investor will target bosses at firms failing on...

Scottish convoy sets out to deliver fire engines to...

Minority students push back on calls for police in...

Abramovich’s jet among 100 planes grounded by US

Mane says he will listen to Senegalese people on...