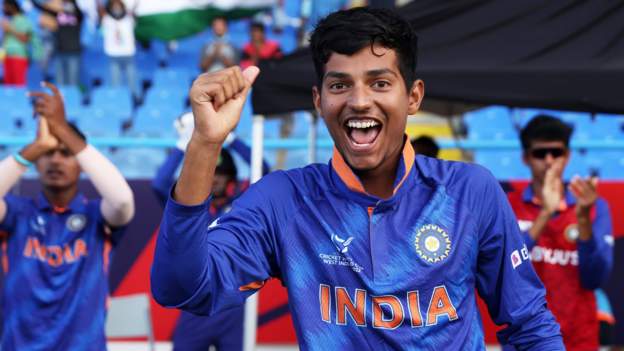 James Rew hit a magnificent 95 but England’s batting let them down as India won the U19 Men’s World Cup for the fifth time with a four-wicket victory in Antigua.

England, playing in their first final at this level for 24 years, had India wobbling at 97-4 as James Sales struck twice to remove two key wickets including Shaik Rasheed, who made a half-century.

Bawa (35) helped put India within striking distance before Nishant Sindhu got the done for India with an unbeaten half-century. Suspect named in slayings of newlyweds at Utah campsite

Giuliani backs out of appearance before House January 6...

Trucks, RVs and cars flock to Washington area to...

The Surprising Climate Cost of the Humblest Battery Material

Forget standing desks: Bed desks are the way to...

‘Anthro Is Notorious for This’: Artist Claims Anthropologie Stole...

A new Kindle update means I don’t need to...

Dad Who Declares He’s Moving Back With Ex After...

The Global Diamond Trade Is Fracturing

Action on patient safety will help achieve the health...

9 Dead in Texas Crash Involving U. of Southwest...

Jason Rantz: Buttigieg panics about ‘racist highways’ while US...

Ex-RNC staffer gets more than 12 years in prison...

Mozilla has shut down its most pointless Firefox browser

Rachel Campos Duffy: If you’re going to shutdown a...

Joe Rogan shares apology for ‘regretful and shameful’ use of n-word in...