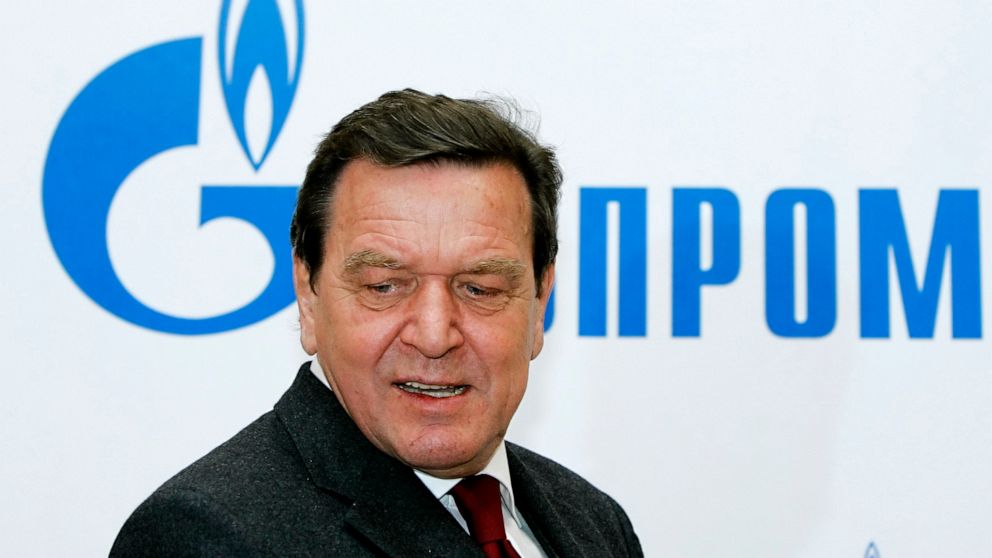 BERLIN — Russian state-owned gas company Gazprom said Friday that German ex-Chancellor Gerhard Schroeder has been nominated to join its board of directors, a move that comes as the former leader has faced criticism for accusing Ukraine of saber-rattling during its standoff with Russia.

Schroeder, who led Germany from 1998 to 2005, developed a close relationship with Russian President Vladimir Putin when he was chancellor. The 77-year-old already chairs the shareholders’ committee of Nord Stream AG and heads the board of directors of Nord Stream 2, a new pipeline opposed by the U.S., Ukraine and some other German allies that has been built to bring Russian gas to Germany under the Baltic Sea but isn’t yet in service.

Gazprom listed Schroeder among 11 nominees for its board of directors, to be voted on at its annual general meeting in St. Petersburg on June 30.

Schroeder’s involvement with the gas pipeline and stalwart defense of Russia have long drawn mixed reviews in Germany, even in his own center-left Social Democratic Party, which heads Chancellor Olaf Scholz’ new governing coalition. Under Scholz, Germany is pushing for diplomatic solutions to the current crisis but has refused to send weapons to Ukraine, annoying some allies.

In a podcast last week, Schroeder said he doesn’t think the Russian leadership has any interest in a military intervention in Ukraine.

I very much hope that they finally stop the saber-rattling in Ukraine because what I hear there, also in the way of finger-pointing at Germany because of the sensible refusal to send weapons, sometimes takes the cake, Schroeder said.

On Wednesday, the new chancellor was asked in an interview with ZDF television whether he is listening to advice from Schroeder.

I haven’t asked him for advice and he hasn’t given me any either, Scholz said. Asked about the message being sent by the ex-chancellor, he replied: If I understand the constitutional order of the Federal Republic of Germany correctly, there is only one chancellor. And that is me.

Canoeists and kayakers call for water access amid reports...

Ransomware attacks are on the rise, so make sure...

El Salvador declares state of emergency amid spike in...

Assert Civilian Control of the Bureaucracy

Celebrity birthdays for the week of Aug. 14-20

China’s severe drought from the air

Sheriff’s helicopter crashes in New Mexico with 4 onboard

Americans applying for jobless aid is lowest since 1969

London Firms Gear Up to Get Staff Back to...

Protecting Florida From the Voters

The Linda Lindas Are Growing Up And Making A...

Best shows and movies like All of Us Are...

Beijing kicks off fresh round of COVID tests as...

Robinhood (HOOD) Is One of the Worst IPOs Since...

Wisconsin GOP bill would count prior COVID-19 infection as...

‘The Ingraham Angle’ on the Biden economy at the...

Nick Kyrgios: Why ‘bad boy’ needed to remind us...

Dollar wallows near 3-week low on bets for less...

Maine government looking into four dams in order to...

How does a food processor work?

Xbox Series X players, you can make the Share...

Sloppy Use of Machine Learning is Causing a ‘Reproducibility...