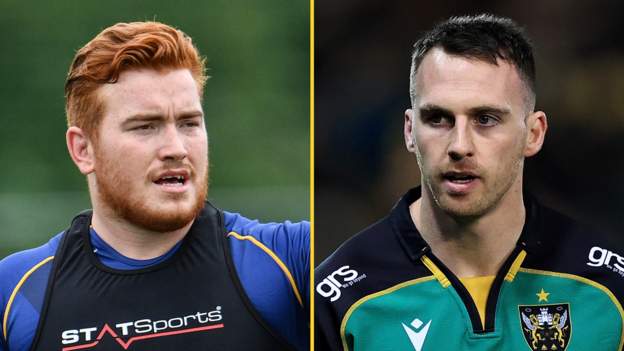 Northampton’s Tom James and Oisin Heffernan have both signed contract extensions with the Premiership club.

Saints currently sit fifth in the table, with 40 points after 13 games.

Scrum-half James, 28, has scored 25 points in 27 appearances since moving to the club from Doncaster Knights in 2020.

A hamstring injury has limited prop Heffernan, 27, to three appearances since making the move from Nottingham in February last year.

The club have not specified the lengths of the deals.

“We’re thrilled to see both Oisín and Tom recommit to Saints.

“TJ has been going from strength to strength since he joined us from Doncaster, and is thriving amongst the talented group of scrum-halves we have at the club.

“And while injury has disrupted Oisín’s time with us so far, he has grabbed his opportunities with both hands and is really working hard to return to action as soon as possible.”

The Papers: BA staff to strike and Boris’s Rwanda...

Protests in India against release of 11 convicted rapists

New this week: Beyoncé, Shark Week, ESPYS and ‘The...

Maduro: Venezuela will be guarantor in Colombian peace talks

EU to harmonize criminalization of rape across the bloc

Apple, Google, and Microsoft Team Up to Vanquish the...

The RNC comes to Orange County

Cannabis-Adjacent Deals Thrive in the U.S., Where Pot is...

Former airline worker: ‘It would be like going back...

Biden’s budget is meant to woo centrists, including one...

US Asks Judge to Dismiss Texas Suit Over Emergency...

Cargill Say Ship It Chartered Was Hit While in...

EXPLAINER: Why are oil prices high, and any relief...

Afghanistan Needs $5B Aid as Half of Country Lacks...

Woman Backed For Excluding Sister From Family Vacations for...

Elon Musk Is Close to a Deal for Twitter...

Disability: Bedbound Gwynedd woman can only stare at ceiling

GV aims to help build a company that can...

Investors Still Haven’t Given Up on Cathie Wood’s ARKK

Floyd Mayweather vs Don Moore live stream: how to...

My rant about Sean Caddle and campaign finance