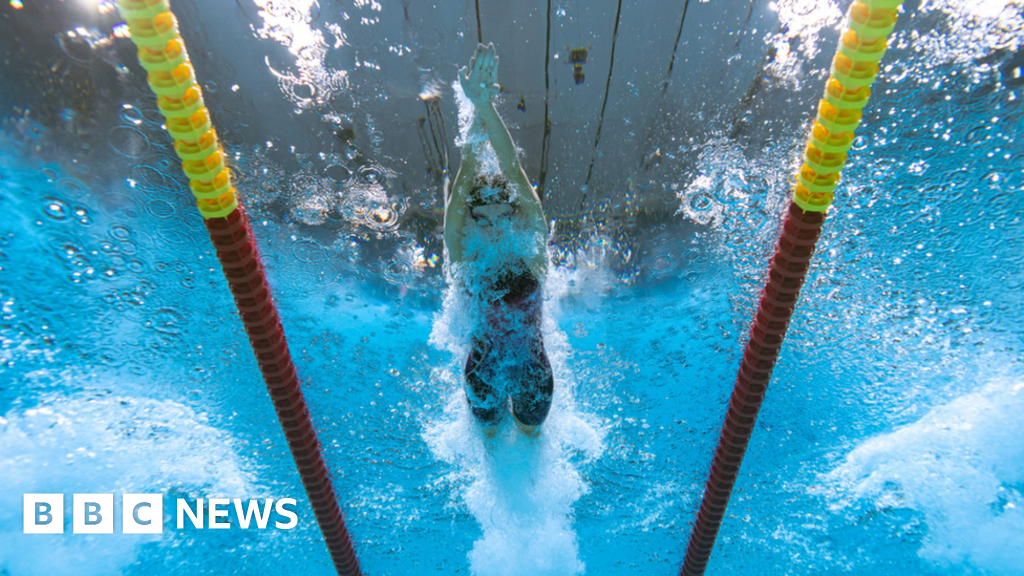 US competitive swimming’s governing body has updated its policy on the eligibility of transgender athletes.

A three-person medical panel will now determine whether “prior physical development of the athlete as a male” gives transgender swimmers an unfair advantage, USA Swimming says.

There will also be testosterone tests for 36 months before competitions.

It comes as a transgender Pennsylvania university athlete has been smashing female swimming records.

The new policy was released on Tuesday and is effective immediately.

In a statement, USA Swimming said it “has and will continue to champion gender equity and the inclusivity of all cisgender and transgender women and their rights to participate in sport, while also fervently supporting competitive equity at elite levels of competition”.

The policy for elite athletes, it said, “acknowledges a competitive difference in the male and female categories and the disadvantages this presents in elite head-to-head competition”.

USA Swimming cited data showing that the top-ranked female athlete in 2021 would on average be ranked below 536th on male events that year.

They added that the policy serves “to mitigate the advantages associated with male puberty and physiology”.

Image caption, Lia Thomas finished 38 seconds ahead of her second-place teammate at a competition last December

The policy update comes amid controversy over University of Pennsylvania transgender swimmer Lia Thomas, who competed on the men’s team for three seasons before starting hormone replacement therapy in spring 2019.

She has shattered records for her university swim team, posting the fastest time of any female swimmer.

At a meeting in Ohio in December, Ms Thomas qualified for the National Collegiate Athletic Association (NCAA) championships finishing 38 seconds ahead of her second-place teammate.

On Tuesday, Ms Thomas’ teammates released a statement supporting her.

“As members of the Penn Women’s Swimming and Diving team and teammates of Lia Thomas, we want to express our full support for Lia in her transition,” the team members said in a statement provided to US media.

“We value her as a person, teammate, and friend,” they said, pushing back against anonymous statements to the press, which they said were “not representative of the feelings, values, and opinions of the entire Penn team, composed of 39 women with diverse backgrounds”.

According to ESPN, it is unclear how many teammates supported the unsigned letter.

Ms Thomas has declined to speak publicly about the controversy, giving only one interview to the SwimSwam podcast.

“It’s not healthy for me to read it and engage with it at all, and so I don’t, and that’s all I’ll say on that,” she said.

Families of students on the team have spoken out, with one anonymous parent recently telling the Washington Post: “There is no chance this year. They train hard but know that they cannot beat Lia.”

Last month, parents sent a letter to the NCAA, demanding the rules be changed for transgender swimmers.

Here’s what you missed at Meta Connect 2022

Covid: Military in hospitals and pupils refusing to wear...

Even Bob Iger is surprised by his return as...

The End of Astronauts—and the Rise of Robots

Kia EV6 owners will get up to three years...

The 17 lawmakers that voted against the Russian oil...

When is Uncharted coming to Netflix? The release date...

Scotland’s papers: ‘A nation mourns’ after death of ‘beloved’...

Five questions to consider ahead of Big Tech’s Q3...

Lakhimpur: India family shattered by rape and murder of...

Trump Stages Rally in Wyoming in His Quest to...

Amber Heard says Johnny Depp struck her when on...

FTX’s Failures Are Crypto’s Too

Gutfeld: Government health agencies put their reputations over your...

The head of the World Health Organization advises men...

Man who placed explosive in Warsaw probed for terrorism

Ashutosh Kaushik: Indian actor fighting for the ‘right to...

Hannity: 'If you don't like what Whoopi Goldberg said,' change the channel

Cuteness Overload: Everything We Know About This Year's 'Puppy Bowl'