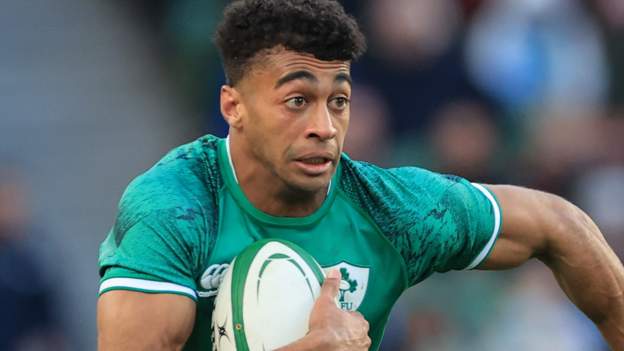 The 24-year-old, who has won two Ireland caps, is aiming for a first appearance in the Six Nations.

“Baloucoune is the form guy although Andy Farrell might see it differently.”

He added: “Keith Earls is coming off an injury and hasn’t had a lot of game time so I think Baloucoune has played his way in.”

Ireland coach Farrell will name his team on Thursday – two days before the Aviva Stadium game against the reigning champions.

O’Sullivan believes Ulster centre James Hume could also feature in the tournament as Ireland chase a first title since their Grand Slam success in 2018.

The Irish have won their last eight games and with Iain Henderson returning to training on Tuesday they have no injury concerns ahead of the Dublin encounter.

O’Sullivan has picked out the Paris game against France on 12 February as key for Irish hopes.

“It’s a fantastic squad, we’re relatively injury free and building on the success of the autumn – Ireland are in a really good place,” he added.

“But the Six Nations is a funny animal and one of the major factors is if it’s an odd or even year. It’s an even year so we have to go to Paris and Twickenham, which makes it more difficult and there’s also the sequence of fixtures.

“Wales up first is a tricky one but not as tricky if it was in Cardiff. We’ve a good record against Wales in Dublin and they have injury issues so you would like to think if we’re playing to form we’ll get past Wales.

“But the big one then, if we beat Wales, is going to Paris. That will probably define our Six Nations because if we win in Paris we’re looking at Grand Slam territory if not championship territory.

“I think Iain Henderson might miss out again this weekend because of his injury status. It’s possible if we have two wins under our belt that there is wiggle room against Italy to see guys getting a run like James Hume, who has been very impressive.” Douglas Brinkley on voting rights and the “new Jim...

Renault limited to 44% stake in Nissan under agreement,...

Lady Gaga in talks to join Joaquin Phoenix in...

Pence: Biden’s done more damage to US than any...

Acer’s new Vero Chromebook is built to be recycled

Viral video shows children rejoicing after learning they no...

French authorities say that the beluga whale that was...

Russian stocks slide as trading resumes for all companies

Kids are feeling extra stressed during the pandemic. A...

India Will Consider More Assistance to Sri Lanka After...

Canada has a massive surplus of unused ventilators

Verstappen will not ease up despite points gap –...

Chris Hemsworth is here to mess with your head...

Why tribal lands are unlikely to become abortion sanctuaries