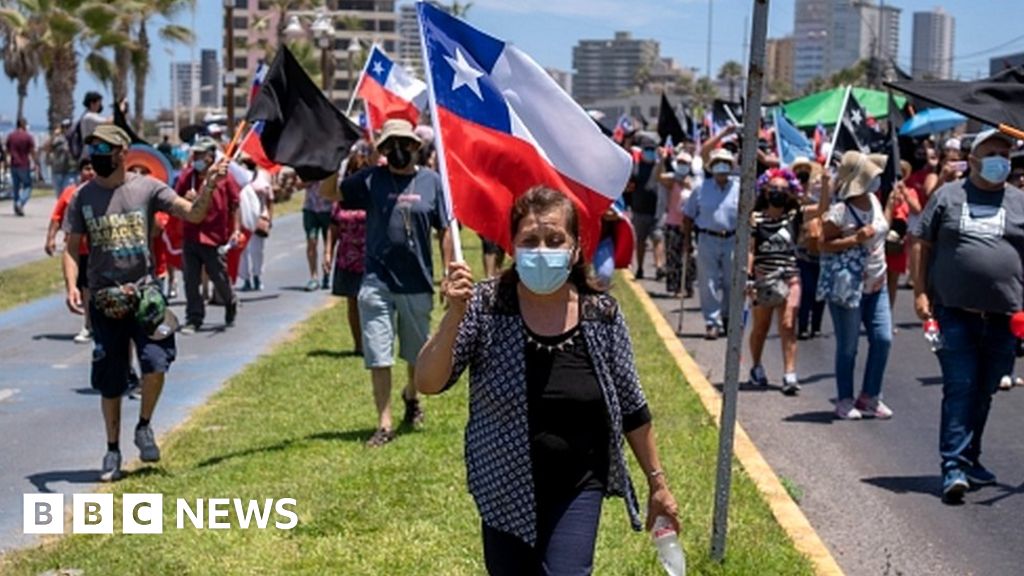 Image caption, Some protesters tore down a makeshift migrant camp

Thousands of people in northern Chile have staged a protest against migration from Venezuela.

Demonstrators marched through the city of Iquique waving Chilean flags and demanding the expulsion of what they called foreign criminals.

Some tore down tents that had housed migrants, while at least one person was beaten by the crowd.

There has been an increase in people arriving in Chile after fleeing Venezuela’s economic collapse.

The protest, which attracted 4,000 people, was triggered by a video that showed two Chilean policemen being attacked at a checkpoint by suspected Venezuelan drug dealers.

Chile, one of the wealthiest countries in South America, has been a destination of choice for many Venezuelans, despite pandemic restrictions in recent years.

But there have been growing tensions over border control in the country, with migration and crime among voters’ biggest concerns in last year’s presidential elections.

“This can’t go on,” read one banner from Sunday’s protest, which was marred by incidents of violence.

Videos on social networks showed a man lying on the ground surrounded by police officers while protesters shouted at him.

Some protesters also destroyed belongings taken from migrant camps in the streets.

However, police said they had made no arrests because there had been “no serious disorder”. ‘Box office’ Archer ready to be patient after injury...

This 40-year-old Microsoft Excel rival is making a surprising...

Riding student shot by her Olympian trainer; His lawyers...

Read the Supreme Court’s report on its abortion opinion...

Conservative justices seem to like precedent this time around

At least 6 people injured in explosion at Chicago...

Russia says it has made payments to avoid debt...

Some Palestinians get legal status after years in Gaza...

University of Edinburgh film screening cancelled due to protest

Before monkeypox outbreak, US officials knew for years they...

Pedagogy of the Oppressors

America could learn a thing or two from Germany...

How to find your sleep window and catch better...

Eagles-Cowboys matchup could be an NFC Championship Game preview

Oklahoma driver who killed 4 from California in DUI...

6 shot during funeral service at church

Ukraine Diplomacy Amps Up Amid Doubts on Russian Pullback

Putin claims Russia has not lost anything as a...

SpaceX to launch tomato seeds, other supplies to International...

Brembo’s Electric Brake System Will Change the Way You...

Naomi Biden Wedding Style Analysis: From the Dress to...

Google’s experimental ChatGPT rivals include a search bot and...

How to (Ethically) Get Rid of Your Unwanted Stuff