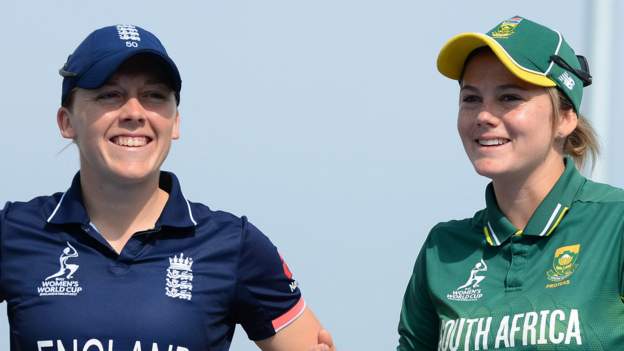 There are no International Cricket Council women’s Test rankings but South Africa are second in the ODI rankings, a place above England.

England are set to host a women’s Test against South Africa in the summer.

The Test, South Africa’s first since 2014, is expected to be agreed as part of a 2022 tour for the Proteas.

It comes amid widespread calls for an increased number of women’s Tests, with none currently scheduled after Sunday’s dramatic Ashes finale in Canberra.

England and Australia hosted India last year, but women’s Tests have otherwise only been played during multi-format Ashes series in recent years.

This year’s one-off Ashes Test ended in a thrilling draw at the Manuka Oval with England number 11 Kate Cross surviving the final over.

England had earlier looked to be cruising in a record chase of 257 in 48 overs but collapsed in the last 10 overs to the point they had to turn their attention to avoiding defeat.

England’s 2022 home women’s fixtures have yet to be finalised but could be confirmed by mid-February.

, would be played in addition to Twenty20 and one-day international matches.

Tommy Robinson pursued by creditors for an estimated £2m

Biden says ‘ghost gun’ crackdown should be ‘just the...

Musk says he would reverse Twitter’s ban of Donald...

Why the West Virginia v. EPA Ruling Matters for...

The average ransomware group only lives for two years

Indiana to lower income tax over next seven years

Netflix’s latest hit movie is getting a sequel and...

The Formula Behind One Doctor’s Diet Empire

Evgeny Lebedev: I am not some agent of Russia

Where to buy a Dyson Airwrap: all the retailers...

Celebrity birthdays for the week of July 17-23

Week after July 4 parade shooting, a moment of...

When two men of color go missing, a White...