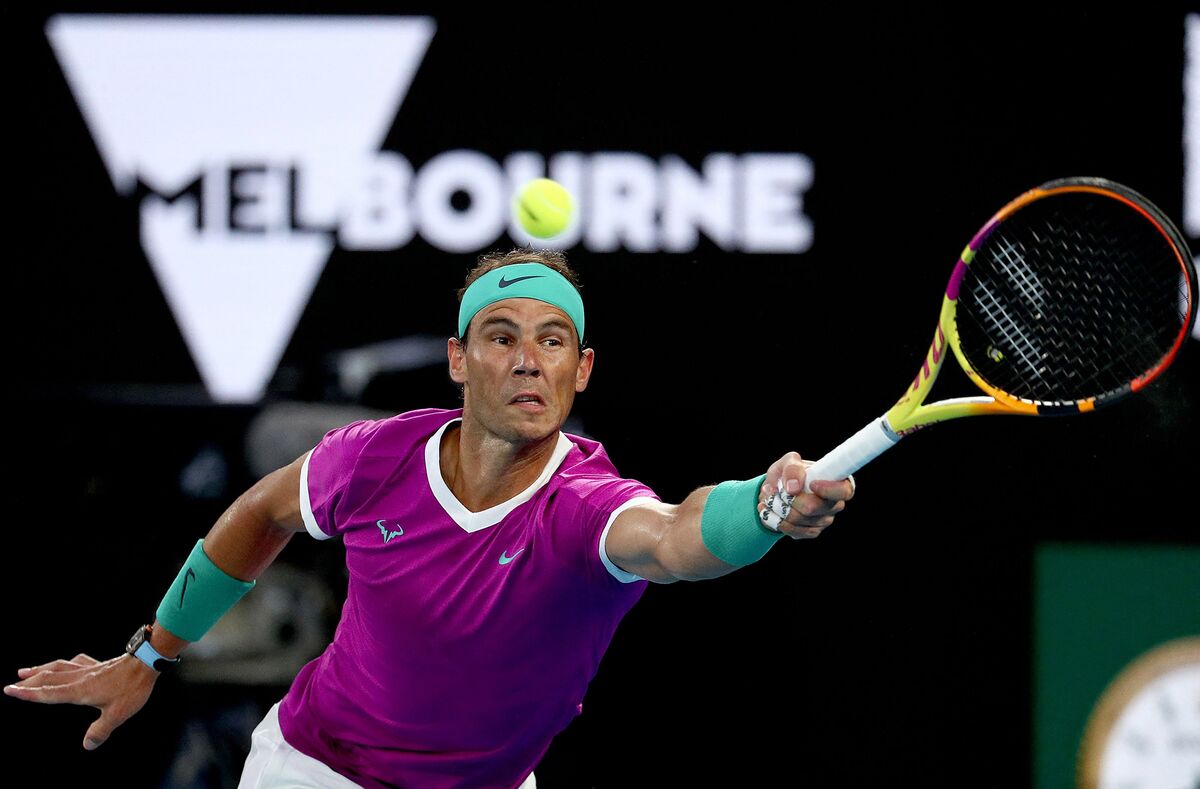 Melbourne, Australia (AP) — The Latest at the Australian Open on Sunday (all times local):

Daniil Medvedev has taken the first set 6-2 in the Australian Open final against Rafael Nadal.

The U.S. Open champion broke Nadals serve twice and then served it out in 42 minutes. Nadals first serve percentage was down to 54% compared with Medvedevs 82%.

Medvedev is bidding to be the first man in the Open era to win his second Grand Slam title at the next major tournament. He lost last years Australian Open final to Novak Djokovic.

Nadal is chasing a mens record 21st Grand Slam singles title to break a tie for the mark he currently shares with Roger Federer and Djokovic.

Rafael Nadal is serving first in the Australian Open final against Daniil Medvedev.

The 35-year-old Spaniard is chasing a mens record 21st Grand Slam singles title to break a tie for the mark he currently shares with Roger Federer and Novak Djokovic. Nadal is also aiming to be just the fourth man in history to win all four of the tennis majors at least twice.

U.S. Open champion Medvedev is bidding to be the first man in the Open era to win his second Grand Slam title at the next major tournament.

Barbora Krejcikova and Katerina Siniakova moved a step closer to a career Grand Slam in doubles when they won their first Australian Open title on Sunday, beating Anna Danilina and Beatriz Haddad Maia 6-7 (3), 6-4, 6-4.

The Czech pair already had two French Open’s and a Wimbledon title along with Olympic gold medals. But their win on Sunday gave them their fourth Grand Slam title in five finals and their first on hard courts.

The top seeds were forced to fight all the way by their unseeded rivals, dropping a set for the first time at the tournament and battling 2 hours, 42 minutes before clinching their victory.

Siniakova first served for the match at 5-2 in the third set but Danilina of Kazakhstan and Haddad Maia of Brazil broke her serve to prolong the match. Krejikova finally served out the match at the next opportunity.

The pair have been doubles partners since junior tennis and won the French Open junior title against a partnership including Haddad Maia.

Danilina of Kazakhstan and Haddad Maia of Brazil took the first set 7-6 (3) but the Czech pair of Krejcikova and Siniakova leveled the match when they took the second set 6-4.

The top-seeds broke Haddad Maia’s serve in the opening game of the second set and held that advantage to send the match into a deciding third set.

Krejcikova faced a break point in the sixth game but held to retain the top seeds’ advantage.

The Czech pair are bidding for their first Australian Open title, after losing in last year’s final, and are chasing their fourth Grand Slam doubles title, their first on a hard court. They won the French Open in 2018 and 2021 and Wimbledon in 2018.

The pair also are Olympic champions.

The startling rise of Anna Danilina and Beatriz Haddad Maia as a doubles partnership continued Sunday when they took the first set of the Australian Open women’s final 7-6 (3) against top-seeded Barbora Krejcikova and Katerina Siniakova .

Danilina of Kazakhstan and Haddad Maia of Brazil have won all nine matches together since they became a doubles partnership, including the final of the Sydney International heading into the first Grand Slam of the year.

They twice led by a service break in Sunday’s final before the Krejcikova and Siniakova rallied to take the set into a tie-breaker.

Danilina and Haddad Maia broke Siniakova in the third game of the first set and both held serve to go ahead 4-2. Krejcikova and Siniakova broke Danilina in the eighth game to level the match.

Siniakova dropped her serve again in the 11th game but the top-seeded pair again broke back immediately.

Danilina and Haddad Maia then took the first six points of the tie-breaker before clinching the first set 7-6 (3).

Krejcikova and Siniakova will be appearing in the final for the second year in a row after losing to Elise Mertens and Aryna Sabalenka in last years final. The Czech pair will also be attempting to take a step closer to a career slam in doubles after winning the French Open in 2018 and 2021 and Wimbledon in

They reached the final with a 6-2, 6-3 win over Veronika Kudermetova of Russia and Belgiums Mertens who was attempting to win her second-straight Australian Open final.

We had to go through a lot of tough matches to get to the final, so I think I can say for both of us that were really proud and looking forward to the final, Krejcikova said after the semifinal victory.

Danilina of Kazakhstan and Beatriz Haddad Maia of Brazil beat the second seeded Japanese pairing of Shuko Aoyama and Ena Shibahara 6-4, 5-7, 6-4 in their semifinal. They are unbeaten in nine matches together. India’s private school aspiration increasingly out of reach as...

Rohit not giving up despite Mumbai’s sixth IPL defeat...

Asia on high alert for monkeypox as cases reported...

Your Samsung Smart TV just got smarter – about...

Nvidia to forge ahead with plans for Arm-based CPUs

Half of House GOP Who Voted to Impeach Trump...

Scaramucci Halts Withdrawals in a Fund After Stock, Crypto...