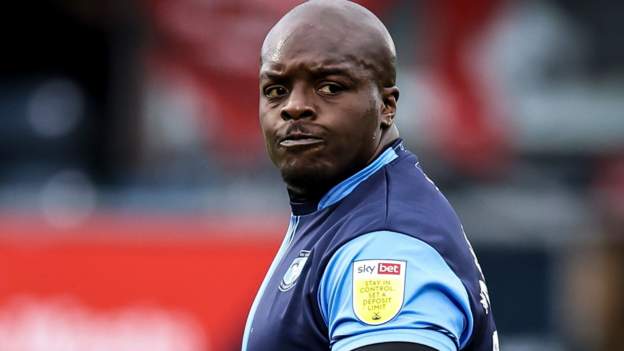 Midway through the first half, the referee briefly stopped the game due to a chant from Dons fans targeting Wanderers substitute Akinfenwa, who was warming up at the side of the pitch.

A tannoy announcement imploring away fans to stop seemingly had no effect while MK Dons’ official Twitter account also asked their supporters to refrain from repeating the chant.

The game was paused as Chairboys boss Gareth Ainsworth spoke to the referee about the incident and Akinfenwa also angrily remonstrated with the Dons fans, although the match restarted shortly after.

“There’s no room for that in football,” Ainsworth told BBC Three Counties Radio.

“There are mindless people in football. I’m just proud that the the referee stopped the game and it was highlighted.

“Bayo is fine. He stayed out for 45 minutes after the game, and missed my post-game talk, because the Wycombe fans showed how much they love him and wanted photos and autographs and he just never says no. That’s the mark of the man.”

On the pitch, Scott Twine’s 13th goal of the season early on proved the difference as the Dons leap-frogged their hosts into fourth place in League One.

The hosts almost levelled when Joe Jacobson headed inches wide from Garath McCleary’s cross although just before the hour mark, Stockdale brilliantly palmed Corbeanu’s diving header onto the crossbar to keep the deficit at just 1-0.

The hosts rallied late on and half-time sub Sam Vokes headed inches over the bar but they couldn’t snatch a point.

On the Akinfenwa incident, MK Dons boss Liam Manning said: “It’s really important to stress for me and the club that it doesn’t represent the club. I was really disappointed to hear it.

“It’s a shame because it takes away from the performance by the lads, it tarnishes it a little bit. It was a really good match and it just leaves a sour taste.

“We can only offer our apologies to Adebayo and Wycombe for it happening.” Crawley prepared to do whatever it takes to play...

China’s promotion of Russian disinformation indicates where its loyalties...

President Biden has agreed “in principle” to a meeting...

Rubio on failed cease-fire: ‘The Russians never keep their...

Queen’s home movies to be in new documentary for...

Google Pixel 3 range has lost support for a...

Trump said Belichick ‘chickened out’ by deciding not to...

UN to vote Thursday on suspending Russia from rights...

Soon you won’t be able to buy books on...

Capitol marks two years since closing to public from...

Inside DEA lab as agency cracks down on fentanyl

‘He has decided to destroy the whole world’: Six...

Three new M2-powered Macs could make an appearance at...

Commodities Will Be the Next Market to Succumb

Homeland Security announces $1.6B in grants for cybersecurity, to...

Mental Health in the Workplace: How Organizations Can Best...