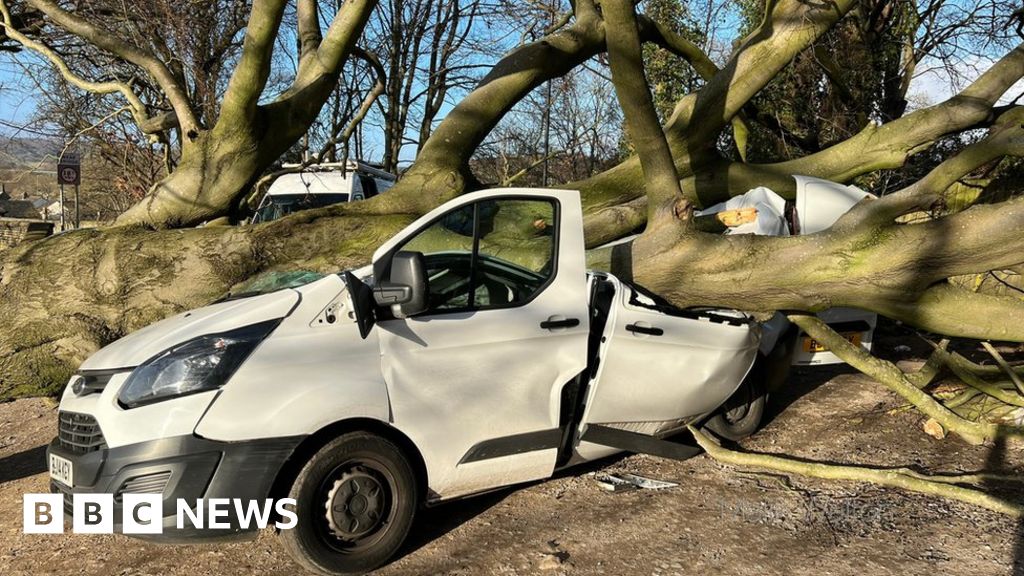 Image caption, A man was left with cuts and bruises after a tree came down on the van he was inside

A man escaped with just cuts and bruises from a van crushed by a tree that fell in Storm Malik’s strong winds.

He had been out cycling with friends and was getting changed in the back of the vehicle when the tree came down on top of it in Apperley Bridge, Bradford.

For a while he was trapped inside but avoided serious injury.

He was nevertheless shaken by the ordeal, and a second rider, parked near the van, had “feared the worst”.

Earlier, a woman was killed by a falling tree in Aberdeen following recorded gusts of up to 85mph.

Image caption, The man inside the van when it was crushed had spent the morning cycling in nearby woodland

Gusts of up to 80mph have caused widespread disruption as Storm Malik sweeps across northern parts of the UK.

The Humber Bridge was partly closed after a lorry was blown on to its side by strong winds.

The bridge, between Hessle and Barton-upon-Humber, was shut by emergency services at about 13:30 GMT. It remains closed to northbound traffic.

Image caption, Strong winds have been reported across the north of England because of Storm Malik

High-sided vehicles had been prohibited from crossing the bridge this morning.

The ambulance service has been contacted for information about the welfare of the lorry’s occupants.

Prisoner who escaped custody and got a firearm surrenders...

The Batman’s latest poster turns the tables on the...

Russia-Ukraine War: What to know on Day 8 of...

Taiwan’s ‘Rainbow Village’ has a surprising history and a...

What political upheaval in Pakistan means for rest of...

6 creative ways to transform your workouts

Biden ‘a disgrace and a disaster’ on Russia-Ukraine War:...

Opinion: I was caught in the uncomfortable middle of...

Ukraine and Russia participate in first prisoners of war...

Teachers in a US military town are drawing straight...

Will your Apple Watch get the watchOS 9 update?

Hilton Has Now Nearly Outperformed Zoom Video Since the...

Eight years. Three Presidents. And still no resolution on...

S.Korea’s Yoon says he will move presidential office to...