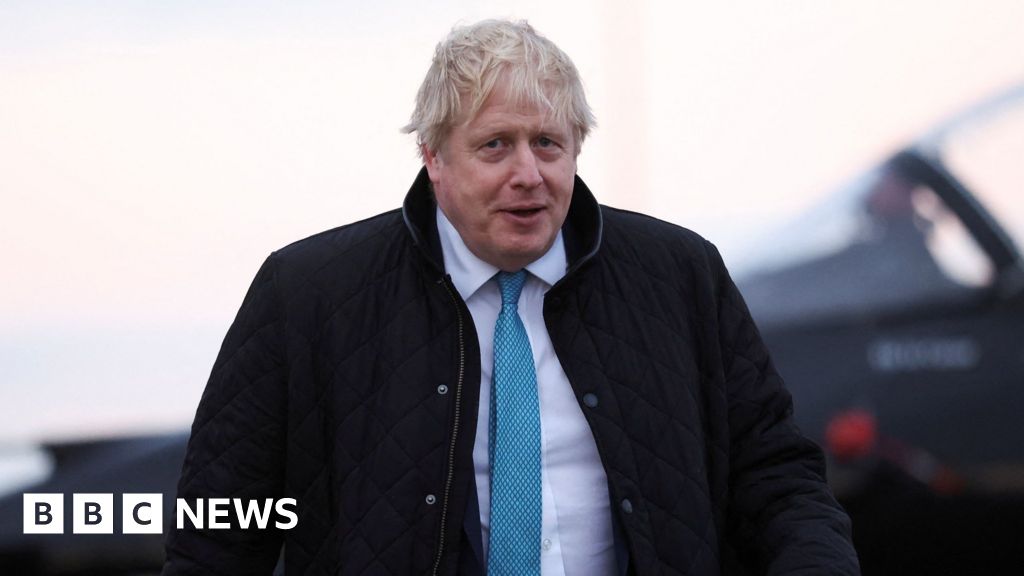 Image caption, Prime Minister Boris Johnson and Russian President Vladimir Putin pictured during a meeting at an international summit on Libya in 2020

Boris Johnson will telephone Russian President Vladimir Putin and visit Eastern Europe in the coming days as the UK steps up its diplomatic efforts to resolve the Ukraine border crisis.

No 10 said the PM would repeat the need for Russia to “engage diplomatically” when he speaks to Mr Putin this week.

He will “reiterate the need for Russia to step back”, No 10 added.

Russia – which has denied it plans to invade Ukraine – has placed about 100,00 troops, tanks, artillery and missiles on Ukraine’s border.

It is the first time since World War Two that Russia has moved troops from the east of the country to the Ukraine border.

As well as Mr Johnson’s visit to the region, Foreign Secretary Liz Truss will visit Moscow in the next two weeks, the Russian Embassy in the UK said.

Mr Johnson has asked military and security chiefs to give him more options to mitigate against what Downing Street has called “growing Russian aggression”.

This weekend, the prime minister is considering those options – including the deployment of more British troops to Nato countries in the region.

On Monday, the Foreign Office is expected to announce to Parliament a toughening of its sanctions regime, which would enable the UK to target Russian interests.

During the call, the leaders agreed “that diplomatic talks with Russia remained the first priority”, Downing Street said.

A Downing Street spokeswoman said: “The prime minister is determined to accelerate diplomatic efforts and ramp up deterrence to avoid bloodshed in Europe.

“He will reiterate the need for Russia to step back and engage diplomatically when he speaks to President Putin this week.”

Last week, Defence Secretary Ben Wallace travelled to Europe to build momentum for sanctions against Russia and support for Ukraine.

Mr Wallace visited the Hague, Berlin and Belgium to push for further action from European allies. He is shortly set to travel to Moscow for talks with Russia’s Defence Minister, Sergei Shoigu.

The defence secretary has told the BBC there is still “a chance” that a Russian invasion could be halted, but added: “I’m not optimistic.”

Meanwhile, Ukraine’s President Volodymyr Zelensky has urged the West not to create panic – saying that warnings of an imminent invasion were threatening the nation’s economy.

Trevor Reed’s father advocates outside White House for other...

Elon Musk reportedly had twins with a Neuralink executive

Trump supporter who assaulted cops at the Capitol sentenced...

Mastriano threatens to renege on testifying to Jan. 6...

Deputies Rip Out Lock for Eviction Only to Realize...

Russia’s Fortress Economy Has Some Cracks

Book excerpt: “Rickey,” on the life of baseball legend...

A year on, could Trump social media ban backfire?

Fed Not Yet Favoring Half-Point Hike, Emergency Move as...

Drivers stranded as long as 24 hours on icy...

A-Rod, once scorned by Trump, in group buying his...

Man who described himself as R. Kelly’s manager pleads...

Formula One: Safety car rules tweaked by FIA in...

Three years after the first 5G phone landed in...

Justice Department charges Wisconsin man who said it was...

Spotify Thrived Where Facebook, Snap and Roku All Slipped

The cause of the latest Windows 11 blue screen...

Review: A portrait of a Putin opposition leader in...

Microsoft is cutting back on refreshing its data center...