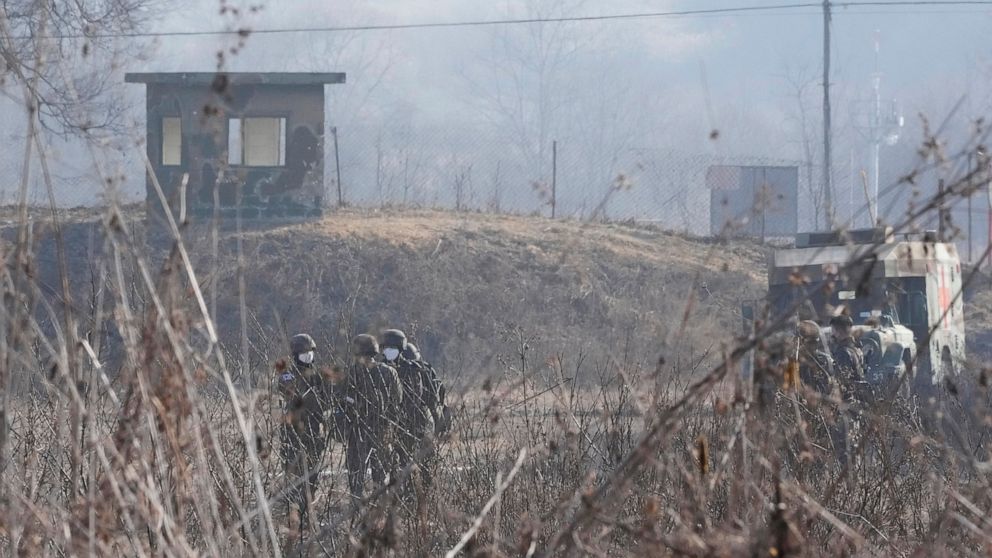 SEOUL, South Korea — North Korea said Friday its two latest rounds of weapons tests this week were successful while vowing to bolster its nuclear war deterrent and speed up the development of more powerful warheads.

It appeared North Korean leader Kim Jong Un did not attend the tests on Tuesday and Thursday, which were detected by the militaries of neighbors South Korea and Japan. But Kim did inspect a munitions factory where workers pledged loyalty to their leader, who smashes with his bold pluck the challenges of U.S. imperialists and their vassal forces,” state media said.

North Korea has been ramping up its testing activity in recent months, including six rounds of weapons launches so far in 2022, demonstrating its military might amid pandemic-related difficulties and a prolonged freeze in nuclear diplomacy with the United States.

While aggressively expanding his military capabilities despite limited resources, Kim is also reviving Pyongyangs old playbook of brinkmanship to wrest concessions from Washington, which leads international sanctions over the North’s nuclear program.

The missile, which North Korea has tested since 2019, could be launched from launcher trucks and trains and is designed for maneuverability and low-altitude flight. Its seen as a key piece in the countrys expanding arsenal of shorter-range weapons apparently aimed at overwhelming missile defenses in the region.

KCNA said Tuesdays launches were of a purported long-range cruise missile the North first tested in September. The two missiles flew for more than 2 hours and 35 minutes and demonstrated an ability to strike targets 1,800 kilometers (1,118 miles) away, a performance that underscored their value in boosting the war deterrence of the country, the agency said.

The North has described this weapon as strategic, implying that its being developed to deliver nuclear weapons.

Kim had attended a Jan. 11 test-firing of a purported hypersonic missile he described as the most significant part of a five-year plan to build up the Norths military force. His wishlist also includes multi-warhead missiles, spy satellites, solid-fuel long-range missiles and submarine-launched nuclear missiles.

KCNA, in its separate report on Kim’s visit to a munitions factory, said the facility was producing a major weapon system.” It didn’t say when he visited.

Touring the facility with top officials, including his increasingly powerful sister Kim Yo Jong, Kim Jong Un highly appreciated the workers efforts to modernize the countrys military and their devotion to defend the ruling Workers Partys revolutionary cause with powerful cutting-edge arms, the KCNA said.

North Korea has described its weapons tests as a rightful exercise of self-defense and threatened stronger action after the Biden administration imposed fresh sanctions following this months hypersonic tests.

In a ruling party meeting chaired by Kim last week, senior party members made a veiled threat to resume testing of nuclear explosives and long-range missiles targeting the American homeland, which Kim suspended in 2018 while initiating diplomacy with the United States.

Kims summitry with then-President Donald Trump derailed in 2019 after the Americans rejected North Koreas demands for major sanctions relief in exchange for a partial surrender of its nuclear capabilities.

Some experts say North Korea could dramatically escalate weapons demonstrations after the Winter Olympics, which begin Feb. 4 in China, the Norths main ally and economic lifeline.

They say Pyongyangs leadership likely feels it could use a dramatic provocation to move the needle with the Biden administration, which has been preoccupied with bigger adversaries including China and Russia. The Biden administration has offered open-ended talks but showed no willingness to ease sanctions unless Kim takes real steps to abandon the nuclear weapons and missiles. How Shanghai Is Cautiously Reopening After Two Months of...

How Bengals stepped up; an incredible offensive indicator: Sharp...

The list of anti-Ukraine Republican lawmakers is quickly growing

I Like This Cordless Vacuum More Than Most Stick...

Jacinda Ardern resigns: Can women really have it all?

Have we reached ‘peak almond’?

Gingrich on liberals’ misjudgment of Putin: They thought ‘The...

The best Apple deals ahead of Amazon Prime Day...

Elden Ring’s pre-release build is a fascinating glimpse at...

You Might Survive a Nuclear Blast—if You Have the...

Landline wants to fully check you in for your...

Looking ahead to the 2024 elections as Biden waits...

Max Q: Building on the moon and Mars

Sinema, Manchin and the anatomy of a deal

Child Q impact: ‘Our voices need to be heard’

United Airlines has an answer to the pilot shortage:...

US, Iran nuclear talks end in Qatar without deal:...

Rice vs. UTEP: How to watch online, live stream...

How does Canada end the truckers’ mess?

Amazon is reportedly working on a standalone sports app

Georgia pro-Trump ‘electors’ say they weren’t clued in on...

Walmart Deals for Days: Get a Shark AI Vacmop...

Sonicware’s latest groovebox is made for lofi beats

Robert Pattinson Breaks Down Batsuit as ‘The Batman’ Preview...

Hitler could not defeat our friend Boris. Now Vladimir...

Opinion: Supreme Court deals a massive blow to the...

Labour left-wingers angry about being blocked as MP candidates

Ben Roethlisberger was nearly traded to 49ers, ex-coach says he turned down...