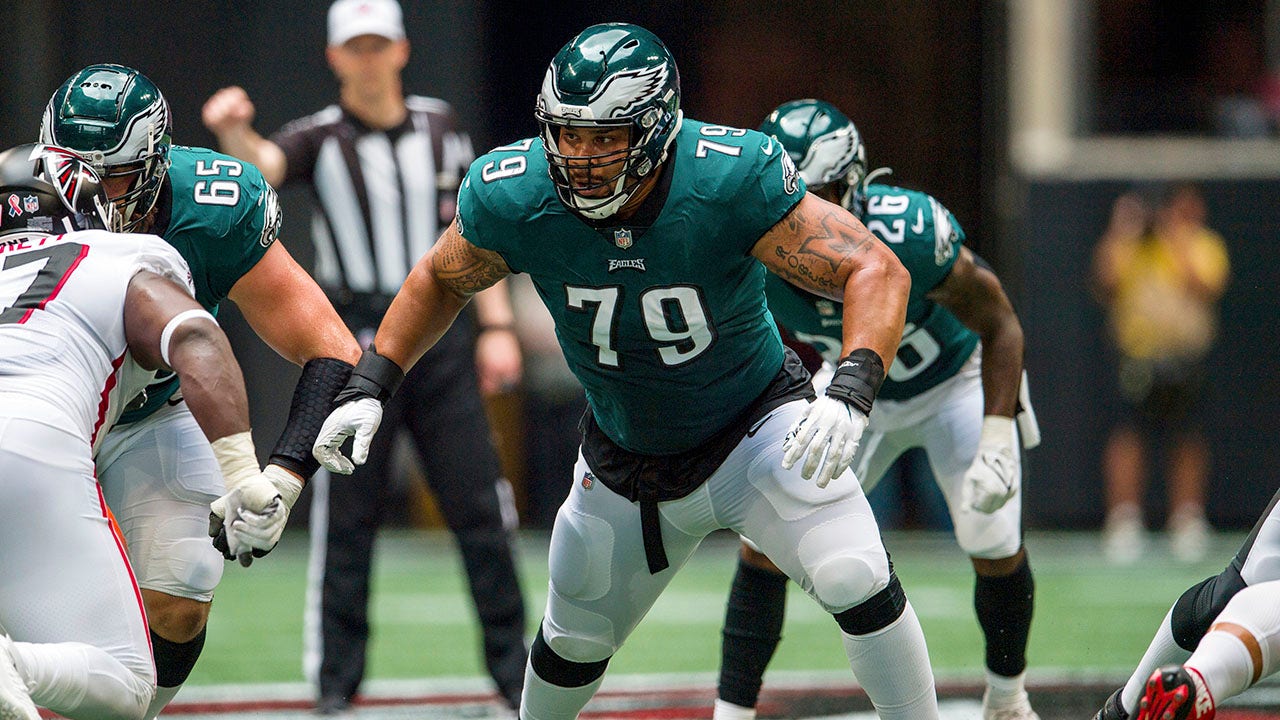 With great reluctance and more than a few tears, Philadelphia Eagles right guard Brandon Brooks announced his retirement Wednesday after 10 seasons in the NFL.

The 32-year-old Brooks, a three-time Pro Bowl pick, became one of the NFLs best guards after the Eagles signed him in free agency in 2016, he helped Philadelphia win a Super Bowl four years ago.

A third-round pick by the Houston Texans out of Miami (Ohio) in 2012, Brooks blossomed under renowned offensive line coach Jeff Stoutland. Brooks spent about four minutes of his retirement announcement thanking dozens of people, but he saved Stoutland for last.

“I feel like it is rare to have a coach who is as impactful on the field as off,” Brooks said. “He took me from being a good player to being the best at my position.”

Brooks said that even after he refined his play to Stoutlands standard, “you pushed me continuously to strive for more, because hungry dogs run faster, and always will. Through all my struggles and low moments, I could always count on a phone call from you, the topic never being about football, but about life and how much you could help. You are family, and always will be.”

Brooks said he doesnt think he has lost his skills, but he cant stay healthy. A string of four serious injuries that began with a torn Achilles tendon in January 2019 prevented him from playing all but two games the last two seasons.

Brooks, quick and powerful at 6-foot-5, 335 pounds, with massive arms and thighs, developed into a key figure for one of the leagues most prominent offensive lines. He gained more positive attention after publicly acknowledging his fight with debilitating anxiety after the condition was diagnosed in 2016.

Brooks was able to help Eagles right tackle Lane Johnson when his issues with depression led to a three-game absence this past season. Johnson returned home to Oklahoma just before the Eagles hosted Kansas City on Oct. 3. When he came back to the Philadelphia area, Brooks went to visit him.

“I really didnt have to say anything at first; we just sat there. Sometimes words arent necessarily needed,” Brooks said. “We sat there and we really just kind of reflected on life the ups and downs, the struggles, the things you go through. It wasnt even a football conversation at that point. Just like he had my back, through the ups and downs, I wanted to have his. I think that made our bond a lot closer, a lot stronger.”

FILE – Philadelphia Eagles offensive guard Brandon Brooks (79) looks to block during the first half of an NFL football game against the Atlanta Falcons, on Sept. 12, 2021, in Atlanta. Brooks announced his retirement Wednesday, Jan. 26, 2022, after 10 seasons in the NFL.

This season, when Brooks suffered a torn pectoral tendon in Week 2, the team thought he might be able to return in about two months; hed exceeded expectations with recoveries following both of his Achilles tendon surgeries and his shoulder surgery. But this time, that didnt happen.

“I think you realize at a certain age, your bodys not necessarily recovering like it used to. It took a little longer than I would have liked,” Brooks said. “In the end, I didnt have enough time to get where I needed to be to at least get a couple of practices under my belt” before the Eagles were eliminated from the wild-card round of the playoffs by Tampa Bay. “It was unfortunate, really, the last two years, how things ended. But for me, it was a lot more about the journey. You cant have joy without sadness, right? The first four years (with the Eagles) I wouldnt trade for the world, (even) if I had to weather these last two.”

Brooks said he plans to remain in the Philly area, and will apply to business school at the University of Pennsylvania. Though he was born and raised in Wisconsin, Brooks said he feels a special bond with Eagles fans.

He noted how he hadnt realized how much finally winning the Super Bowl would mean to the city, which hadnt seen an NFL championship since 1960. He recalled seeing people carrying their loved ones ashes along the parade route.

The Eagles seem to be in decent shape with Nate Herbig or Jack Driscoll available to replace Brooks, as they have done for much of the past two seasons. Or left guard Isaac Seumalo could move to the right side. After Seumalo went down for the season with a Lisfranc foot injury in Week 3, second-round pick Landon Dickerson filled in quite capably, and might be the left guard going forward.

Grange Hill movie to take a look at Britain...

Jesse Watters: Democrats are panicked a red wave is...

Note to Zuckerberg: META Stock Ticker Will Soon Be...

Vast Swath of US Is at Risk of Summer...

Lengthy tailbacks after ‘multi-vehicle’ crash on M8 in Glasgow

EU signs US gas deal to curb reliance on...

‘Rules need to be clear’: Dems call for Covid...

Dorset prisoner on run in underwear found and arrested

These 11 Mac Accessories for Essential for Working From...

NBC not sending announcers to the Beijing 2022 Olympics

Security heightened outside Supreme Court amid leak of draft...

Ex-CDC chief: COVID-19 surge will make it ‘challenging’ for...

Billions Are Being Wagered on Breakthrough Ethereum Revamping

Twisted Metal officially coming back but not as you...