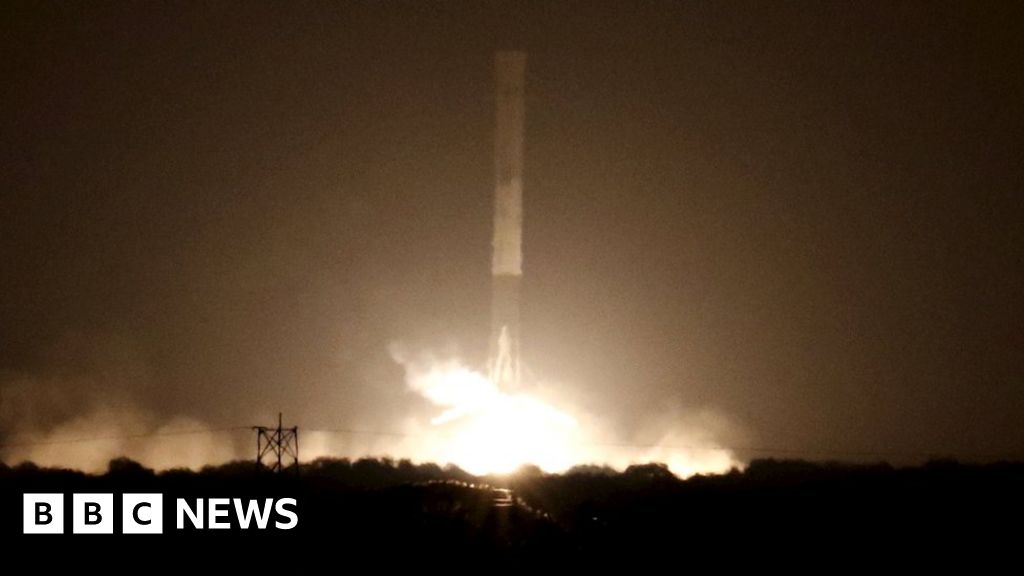 Image caption, A SpaceX rocket Falcon 9 launches from Florida in 2015

A rocket launched by Elon Musk’s space exploration company is on course to crash into the moon and explode.

The Falcon 9 booster was launched in 2015 but after completing its mission, it did not have enough fuel to return towards Earth and instead remained in space.

Astronomer Jonathan McDowell told BBC News it will be the first known uncontrolled rocket collision with the moon.

But the effects will be minor, he says.

The rocket was abandoned in high orbit seven years ago after it completed a mission to send a space weather satellite on a million-mile journey.

It was part of Mr Musk’s space exploration programme SpaceX, a commercial company that ultimately aims to get humans living on other planets.

Since 2015 the rocket has been pulled by different gravitational forces of the earth, moon and sun, making its path somewhat “chaotic”, explains Prof McDowell from the US-based Harvard-Smithsonian Center for Astrophysics.

“It’s been dead – just following the laws of gravity.”

It’s joined millions of other pieces of space junk – machinery discarded in space after completing missions without enough energy to return to earth.

“Over the decades there have been maybe 50 large objects that we’ve totally lost track of. This may have happened a bunch of times before, we just didn’t notice. This would be the first confirmed case,” Prof McDowell says.

Falcon 9’s projected demise was identified by journalist Eric Berger on the space website Ars Technica and by data analyst Bill Gray in his blog.

The collision is due to happen on 4 March when the rocket will explode as it makes contact.

“It’s basically a four-tonne empty metal tank, with a rocket engine on the back. And so if you imagine throwing that at a rock at 5,000 miles an hour, it’s not going to be happy,” Prof McDowell says.

It will leave a small artificial crater on the moon’s surface.

Media caption, SpaceX launch: What is SpaceX and why are they working with Nasa?

Bill Gray, who uses software to track near-Earth space objects, projects that it made a close fly-by on 5 January. On 4 March it’s likely to hit the moon’s far side, he says.

In 2009 Prof McDowell and other astronomers performed an experiment in which a similar-sized rocket was crashed into the moon. Sensors gathered evidence of the collision so they could study the crater.

That means scientists are unlikely to learn anything new from this crash, Prof McDowell explains.

He adds that while there are no consequences now to space debris left to drift and occasionally crash, there could be in the future:

“If we get into the future where there are cities and bases on the moon, we want to know what’s out there. It’s much easier to get that organised when there is slow traffic in space, rather than waiting until it’s a problem.”

And what happens between now and 4 March? Well the rocket will continue to follow the laws of gravity, careening through space, before it ends its days smashing into the moon. Answer Dok Ondar’s Call and Vote for the Next Legacy Lightsaber Hilt!

Naomi Judd, of Grammy-winning duo The Judds, dies at...

US seizes yacht owned by oligarch with close ties...

War in Ukraine: Protesters in Kherson appear to make...

Rejoice! WhatsApp users on iOS can celebrate the return...

Search continues for soldier who jumped into Rio Grande...

​​Croatia’s president says it will not send troops if...

How Russia’s invasion of Ukraine could hurt travel’s recovery

The striking architecture projects set to shape the world...

Why patients are flocking to India for surgery

What is the 1922 Committee and what powers does...

Biden’s chief of staff on potential Putin sanctions: “Nothing...

Some special Microsoft 365 accounts will now receive stronger protection than the...

CDC on omicron cases, hospitalizations: 'Milder does not mean mild'