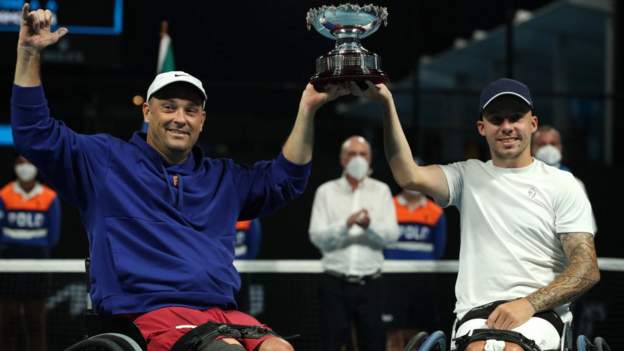 Britain’s Andy Lapthorne and American partner David Wagner fought back from a set down to win the Australian Open wheelchair quad doubles final.

‘To dedicate the win to Isla meant so much’

Lapthorne dedicated his victory to Isla Caton – the seven year old West Ham fan who died from a rare type of cancer.

“[This was] one of the sweetest wins to beat those two who have been tearing through tournaments, especially with what’s been going on at home with Isla passing away,” he said.

“We’ve been all rallying around her for the past few years and losing her this week [made this] a very emotional match for me to play in. To get the win was extra special.

“To be able to dedicate the win to her meant so much to me.”

The 31-year-old said it was one of his main goals to represent and inspire people with disabilities.

“I only had able-bodied people to look up to, no one really like me was on TV,” he said.

“It’s absolutely massive for people with disabilities to be able to turn on the TV and see people like themselves and it only helps grow the profile, only helps the next generation.

“I truly believe the next generation of wheelchair tennis players is going to be incredible and to keep getting stuff like this on TV, the better.”

Polio cases in the US: What experts want you...

What is Taxonomy eligible?

Here’s What English Money Looks Like Under King Charles...

That Microsoft deal isn’t exclusive, video is coming, and...

Inside the turbulent, doomed campaign of Herschel Walker

Peter McGuire on the Markets (Radio)

Five-Year Anniversary of Apple’s Acquisition of Workflow, Which Is...

Ukraine crisis: ‘My city is being shelled, but my...

Misinformation and the midterm elections: What to expect

Dominic Calvert-Lewin: Everton striker says it is difficult for...

IMF’s Georgieva says aid for Ukraine should come as...

Ukraine claws back more territory in areas Russia is...

‘All of Us Are Dead,’ Netflix Teases K-Drama With...