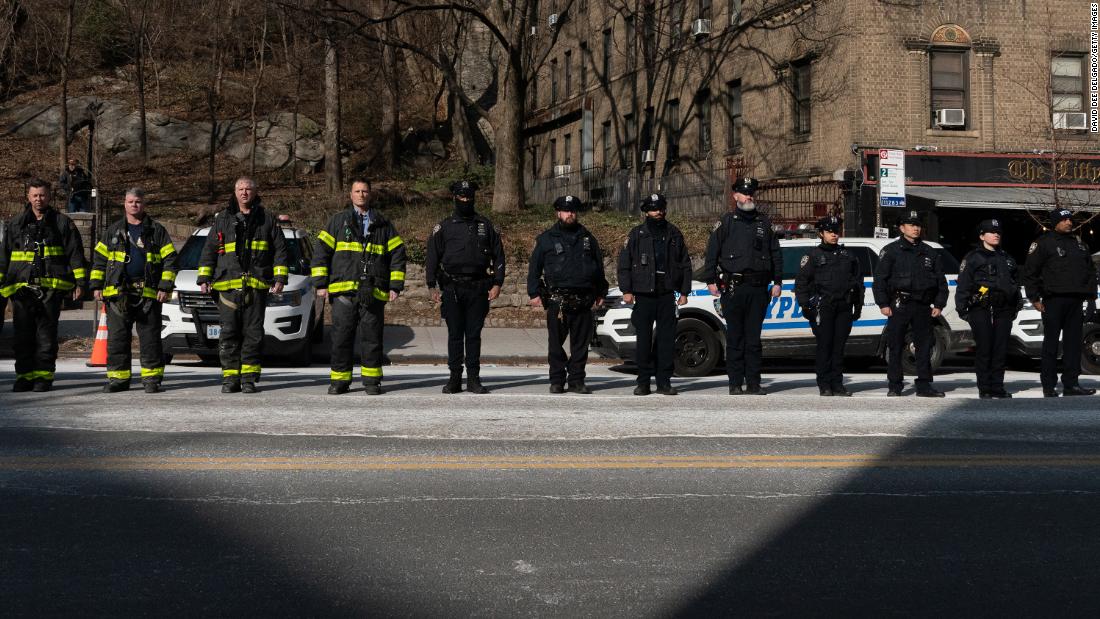 (CNN)The two New York Police Department officers who lost their lives responding to a domestic violence call are being remembered as dedicated heroes to their community.

Officers Wilbert Mora and Jason Rivera, both in their 20s, were shot after encountering someone with a gun after responding to a 911 call about a domestic incident in New York City’s Harlem neighborhood over the weekend.

As the city mourned the lives of two officers, officials emphasized the passion they brought to their jobs.

“Officer Mora and his partner, Officer Jason Rivera, showed courage in the face of imminent danger to protect New Yorkers,” New York Attorney General Letitia James said in a statement. “Their bravery exemplified their commitment to protecting the city they loved. Both will forever be remembered as heroes who dedicated their lives to making New York safer and stronger.”

Rivera’s character was evident at an early age, according to his English teacher, Anthony Voulgarides. “He was self-aware, mature beyond his years,” Voulgarides told CNN. “(Rivera) cared so much about others, appreciated what he had and just exuded this positivity that was such a force in our community.”

Rivera died Friday when the shooter opened fire at him and his partner. Mora was critically wounded and underwent surgery before his death was announced Tuesday.

“Wilbert is 3 times a hero. For choosing a life of service. For sacrificing his life to protect others. For giving life even in death through organ donation. Our heads are bowed & our hearts are heavy,” NYPD Commissioner Keechant Sewell said on Twitter.

Mora “will live on in the heart of every New York City police officer from this day forward,” said Patrick Lynch, the president of the Police Benevolent Association police union, adding that the officer “showed us what it means to carry out our mission with courage, skill and humanity.”

The shootings have spurred extensive changes spearheaded by New York City Mayor Eric Adams, a former police captain himself who took office on January 1. It includes the reintroduction of plainclothes police units, which had been disbanded two years ago.

Some critics derided plainclothes units for years as counterproductive and argued they were a relic from the stop-and-frisk era of policing, used instead as a bludgeoning tool that more negatively affected Black and brown communities.

Rivera himself said he joined the NYPD to improve the department’s relationship with his community.

In an undated letter Rivera wrote to his commanding officer, he recalled seeing his brother being stopped and frisked by police.

“I asked myself, why are we being pulled over if we’re in a taxi? I was too young to know that during that time, the NYPD was pulling over and frisking people at a high rate,” he wrote, noting his perception of that policing bothered him.

Later, he said he learned the department began trying to change its interactions with the community.

“This was when I realized I wanted to be part of the men in blue; better the relationship between the community and the police,” Rivera wrote. “Coming from an immigrant family, I will be the first to say that I am a member of the NYPD, the greatest police force in the world.”

The shootings unfolded as the officers responded to a domestic call around 6:15 p.m. Friday, officials said.

A woman called 911 and reported she was having a dispute with one of her sons inside her apartment, police said. Three NYPD officers arrived and encountered the mother and another son, who directed two of the officers to a room in the back of the apartment.

The other son — the suspect — was waiting, and when the door swung open, shots were fired, hitting both officers. The suspect, identified as 47-year-old Lashawn McNeil, was shot and killed by a third officer when he tried to escape.

Rivera and Mora became the fourth and fifth NYPD officers to have been shot this month, but the only two to lose their lives.

Adams plan will also expand the anti-violence Crisis Management System to address the symptoms of gun violence as well as add more officers on the streets and reduce desk staffing.

More specifically, the plan will also focus on the 30 precincts where 80% of the violence occurs, Adams said.

The mayor also wants to tackle the flow of guns into the city after officials pointed out that the weapon used in Friday’s shootings was a Glock 45 stolen from Baltimore.

While the mayor’s plan was praised by some advocacy groups, his desire to reinstate plainclothes units has received some criticism.

“Today’s announcement gives the community members who live with the legacy of hyper-aggressive policing no comfort that Mayor Adams’s Anti-Crime Unit will be different from its predecessors,” the groups said in a joint statement. “The Mayor must focus on addressing long standing problems with NYPD’s culture of impunity before he doubles down on strategies that will only perpetuate the harms of that culture.”

Still, the mayor defended the police approach, saying his team has done the proper analysis “and now we’re going to deploy that.”

Adams noted that he asked New York City’s five district attorneys to prioritize gun violence and gun-related crimes. He also proposed a weekly meeting between all district attorneys, the NYPD commissioner and the deputy mayor of public safety. Turkey teeth: Are cut-price reality TV teeth worth it?

The Most Damning Allegation in the Twitter Whistleblower’s Report

Analysis: Workers seize their moment to shift the balance...

Musk tweets that he will step down as Twitter...

Apple is set to release its Meta Quest Pro...

Collaborate with the founder community at TechCrunch Early Stage...

Chiefs, Buccaneers playing as scheduled in Tampa amid Hurricane...

A clever new browser extension eliminates one of the...

Arizona governor welcomes successor, though GOP candidate has not...

Pelosi lands in Singapore to kick off Asia tour

Bell: The Heatwave Will Impact The Economy (Audio)

Biden to award Presidential Medal of Freedom to 17...

Android 12L hands-on: Some big multitasking upgrades, but is...

Donald Trump and Ivana’s Burial ‘Tax Break’—What We Do...

How moving Marcus Smart to point guard made Celtics...

Who Cares? Why Empathy In The Workplace Is More...

China accuses US of ‘navigation bullying’ in South China...

Gatik is bringing its self-driving box trucks to Kansas

Jesse Lingard: Newcastle may walk away from deal for Manchester United midfielder