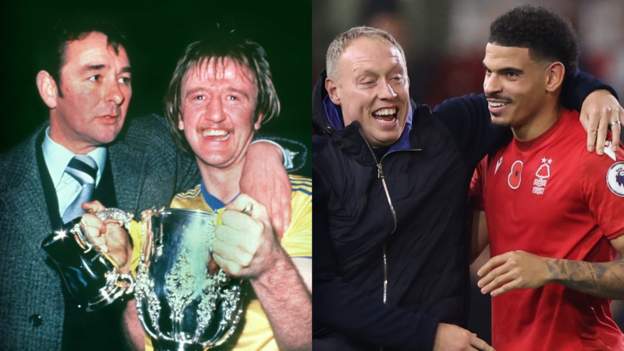 Before Nottingham Forest rose to conquer England, and when miracles of Munich and Madrid were still unfathomable European ambitions, there was the League Cup.

It was the first major trophy the Reds won under the late, great Brian Clough.

The success of 1978 – in which they beat European Cup holders Liverpool in a replay at Old Trafford thanks to a controversial penalty – is seen by Forest legend Martin O’Neill as “a springboard” for all that was to come.

Within two months the Reds, a team that was just in its first season back in the top flight, were First Division champions.

Twelve months later they had collected the first of their two European Cups.

Forest reached the League Cup final six times and collected the trophy on four occasions in 15 years of unparalleled success for the East Midlands club.

On Wednesday, for the first time in 31 years, they will feature in the semi-final of a cup competition.

Again, it is what was known as the League Cup – now the EFL Cup – in their first season back in the top flight.

In the lead up to the home leg of their semi-final tie against Manchester United, Reds boss Steve Cooper has spoken at length about how reaching the last four is a chance for “the older generation to reminisce” and how the “younger generation are being given something new to experience”.

The importance of the competition to Forest is something Cooper has personally made clear to his players.

“History that the club has in the tournament is a rich one really and we have to stand up for that,” he told BBC Radio Nottingham earlier in the competition.

“It doesn’t guarantee success, but it should add to the motivation – I know it it does to mine.”

A competition ‘monumental’ for Forest

From Forest’s dugout at the City Ground, Cooper and his players only need to look up at the Brian Clough Stand across the pitch to see the League Cup’s place in the annals of Forest history.

Running along the edge of the entire second tier, then on to the Bridgford Stand behind the goal, are images and names of the major trophies the club have collected.

O’Neill was a midfielder for Clough’s Forest side that won back-to-back European Cups, claimed the English league title and defended that breakthrough League Cup.

Taking then European Cup holders Liverpool – a side that would retain that title in 1978 before Forest ended their continental reign a year later – to a replay at Old Trafford after the Wembley final ended as a goalless draw was seen at the time as a victory in itself.

In goal the Reds had to rely on teenage goalkeeper Chris Woods, with the iconic Peter Shilton cup-tied.

It took a penalty, controversially awarded after Phil Thompson brought down John O’Hare outside the box, to seal victory.

“Liverpool was this big strong side that was expected to beat us, particularly in the replay when I suppose all our cards had been shown,” said O’Neill, who as a manager twice led Leicester City to League Cup success in the 1990s.

“To beat Liverpool with a couple of players not eligible for us was really fantastic.

“It kept the momentum going for us towards the end of the season to go on and win the league. So it was monumental really in many aspects.

“We had just been promoted into the First Division and I don’t know what sort of expectations were thrust upon us.

“But there we go on this this fantastic run in the league, and it’s kept going with an excellent FA Cup run and then we go on and take the League Cup.

“For us to win two trophies was really sensational.

“The League Cup was the springboard for everything that was achieved after that.”

In 1979, the League Cup – won after beating Southampton in the final – was the first piece of another trophy double.

The European Cup won in Munich in 1979, and defended a year later at the Bernabeu in Madrid, would eclipse all other trophies won by Forest.

Forest missed out on becoming the first club to claim a hat-trick of League Cup triumphs when they were beaten by Wolves in the 1980 decider.

And yet, the cup – once described by former Manchester City boss Manuel Pellegrini as important but “not special” – has maintained a place of distinction for Forest.

When they clinched it for a third time in 1989, the win against Luton in the final was significant as the first trophy Clough had won since his famous partnership with Peter Taylor had ended.

By the time they overcame surprise finalists Oldham Athletic in 1990, no side had won the cup more in the first three decades of the competition.

Steve Hodge started in both wins, having returned to the club for a second spell after stints at Aston Villa and Tottenham.

“This club holds the League Cup really close to its heart,” Hodge said.

“It has given us some great days out. For people there or around during that era, those days are unforgettable.

“We have been craving this now for 30 years.” The Hot New Trend in Weight Loss Is Anything...

Top 50 Have Lost More Than Half Trillion This...

Samsung Galaxy S22 might soon be as fast as...

The battle to break China’s battery-making supremacy, in five...

Deontay Wilder vs. Robert Helenius: Everything You Need To...

How one mom headed off a drug shortage

Help us investigate termination of parental rights in the...

Watch Amazon’s first trailer for ‘The Lord of the...

Bush mistakenly condemns ‘unjustified’ invasion of Iraq, instead of...

As war rages in Ukraine, some children remain near...

Biden faces moment of truth on the economy this...

Sir Lindsay Hoyle: Time as Commons speaker has been...

Law professor on Biden’s potential nominees to the Supreme...

Cloudflare has blocked one of the largest DDoS attacks...

Woman who accused Herschel Walker of pressuring her into...

Ethiopia’s Tigray war: Inside Mekelle cut off from the...

Man gets life in killings of 2 Colorado women...

SpaceX gets OK to bring Starlink internet to planes,...

Analysis: Elon Musk owning Twitter should give everyone pause

Michael Snow, Canadian artist on a ‘Wavelength’ of his...

Inflation keeps going down and it could cool down...

Christmas Day forecast in South Florida: It will be...

Berlin Airport Cancels All Flights on Wednesday Amid Strike