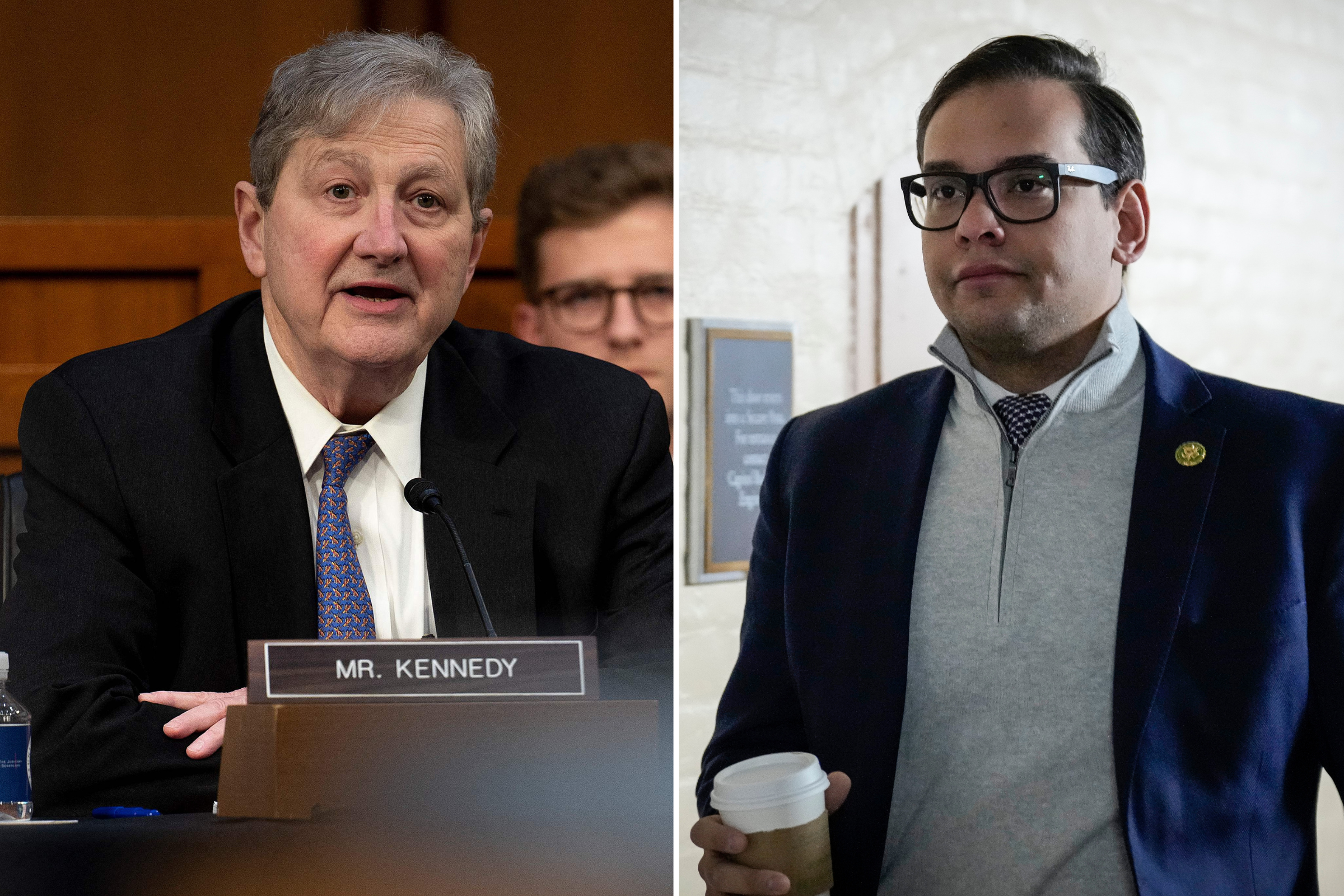 New York Republican Representative George Santos has pushed back at GOP Senator John Kennedy for referring to the congressman as a “bunny boiler.”

Kennedy, who represents Louisiana, told reporters on Monday that Santos was “nutty as a fruitcake,” according to a report from CNN congressional correspondent Manu Raju. A clip of Kennedy’s remarks was also later posted by NowThis on Twitter Tuesday evening.

“He, like every other American, is entitled to due process,” the senator said. “But if the allegations prove to be true, I would boot him.”

“I called him a bunny boiler,” Kennedy added. “I don’t know if you’ve seen ‘Fatal Attraction,’ but there are people like that out there.”

The term “bunny boiler” is a reference to the 1987 film “Fatal Attraction,” in which Glenn Close’s deranged character boils a pet rabbit out of revenge against her ex-lover and his family.

According to Dictionary.com, the slang term is often used to describe a person who is “considered to be emotionally unstable and likely to be dangerously vengeful.”

Louisiana Senator John Kennedy, left, speaks at a markup to vote on the nomination of Ketanji Brown Jackson to be an associate justice of the Supreme Court, on Capitol Hill in Washington, D.C., on April 4, 2022. Representative George Santos, right, walks to a closed-door GOP caucus meeting at the U.S. Capitol on January 10, 2023. Kennedy this week referred to Santos as a “bunny boiler,” a reference to a person who is “emotionally unstable.” Jim Watson/AFP via Getty; Drew Angerer/Getty

Santos responded to Kennedy’s comments Tuesday afternoon, tweeting, “I am saddened that a distinguished senator from the GOP, whom I’ve respected would use such derogatory language against me.”

“Language like that is hurtful and divisive, and has no place in Congress,” Santos wrote.

I am saddened that a distinguished senator from the GOP, whom I’ve respected would use such derogatory language against me. Language like that is hurtful and divisive, and has no place in Congress. https://t.co/O7gA2zmZRo

The newly elected New York lawmaker has repeatedly faced calls to resign from Congress after he was found to have lied about large parts of his resume while running for office this past election cycle.

Among the fabrications include information about his educational background, previous work history and Jewish ancestry.

Twitter users did not let up on their criticisms after Santos called out Kennedy for his “hurtful” language either. The Republican political action group the Lincoln Project responded to Santos’ tweet Tuesday with a photo of the lawmaker in the House chamber, writing, “You know what also has no place in Congress?”

Eric Columbus, former special litigation counsel in the House, wrote in response to Santos, “I am saddened that you lied about 9/11 causing your mother’s death, about being the grandson of Holocaust refugees, about attending college and business school, and about much of your career.”

“Lies like that are hurtful and divisive, and you should have no place in Congress,” Columbus added.

The account Republicans against Trumpism also repeated the call for Santos to resign from his freshman term.

“Maybe it’s just me, but I don’t think you’re the right person to complain about ‘hurtful and divisive’ language,” the account tweeted, adding “#ResignNowGeorge.”

Santos has repeatedly dismissed calls for him to resign from office, but told conservative podcaster Steve Bannon this month that he would resign if 142,000 people asked him to do so. As Newsweek previously reported, over 142,000 constituents elected Santos to office in November.

As of last week, several online petitions asking Santos to step down from office had received well over 142,000 signatures, and a Siena College survey published Monday found that roughly 49 percent of New York GOP voters think he should resign.

Newsweek has reached out to Kennedy’s office for comment.

Drinking Several Cups of Coffee a Day Linked to...

Salman Rushdie: Did a ‘chance’ airport meeting lead to...

Kari Lake defeat: Did democracy win in US midterms?

Adidas’ new solar headphones can also be charged by...

Heroes of Avengers Campus: The Art and Style of...

Garmin launches a new FDA-cleared ECG app for the...

A roof over their head: Churches use tiny homes...

Gunman shot, killed by police after opening fire inside...

Viral infections like RSV, the flu, and COVID have...

Jeff Bezos says he will give most of his...

Why the Senate GOP’s McDaniel for RNC caucus is...

Thanks to detectorists, we know the world’s most wanted...

No speaker yet, but a a lot of speaking

Alleged Stock Scammers Mastered the Art of FOMO on...

Wales players will be ‘devastated’ by Bale retirement

5G voice calls arrive for some T-Mobile customers in...

Germany warns of rise in COVID-19 cases going into...

EXPLAINER: What Turkey’s Erdogan could gain in NATO debate

Child Predators Mine Twitch to Prey on Kids

The White House has one problem that rules them...

What happens to your brain on psychedelics?