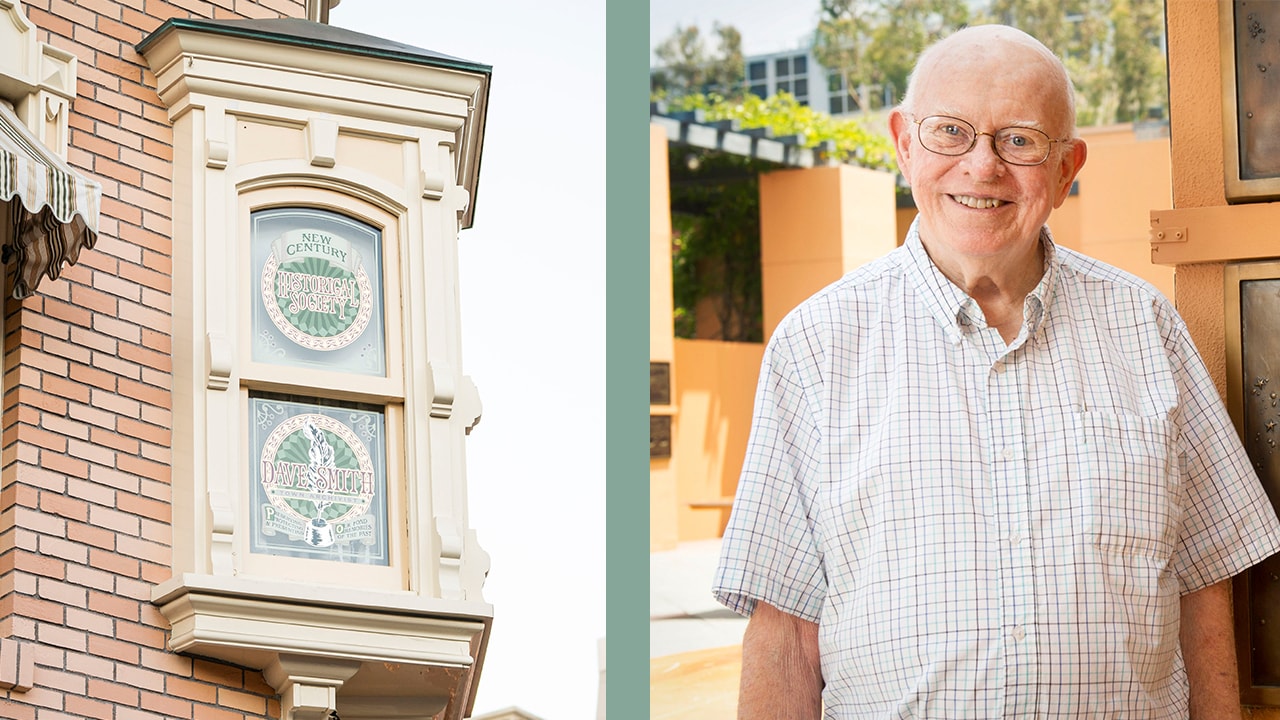 The next time you visit Main Street, U.S.A., at Disneyland park, look up above the Fortuosity Shop and you may spy a familiar name on a new window: Dave Smith, who founded the Walt Disney Archives in 1970 and served as its chief archivist for decades.

On Monday, Jan. 24, 2022, the window was revealed to a small audience of invited guests including Walt Disney Archives employees and Daves family and friends as When You Wish Upon a Star was performed live. The inscription reads: New Century Historical Society, Dave Smith, Town Archivist, Preserving, Protecting & Presenting Our Fond Memories of the Past.

Disneyland Resort President Ken Potrock, Disneyland Park Vice President Kris Theiler, Archives Director Becky Cline, Disney Ambassadors Mark Everett King Jr. and Nataly Guzman, and Daves sister Jean Marana were among the speakers sharing touching words and memories of Dave, who was named a Disney Legend in 2007. Though he passed away at the age of 78 on Feb. 15, 2019, he has left a lasting mark on the legacy of the Archives and the people he met along the way.

You can imagine this is a special tribute, not only because Disneyland is Walt’s original theme park but also, it is a place that Dave loved, Kris said. The windows here on Main Street, are a longstanding tradition that was started by Walt to recognize those who went above and beyond to support the mission and magic of The Walt Disney Company. And, today, for all those who come to this happy place, these windows tell the stories of extraordinary people offering living lessons about their roles, their contributions and the legacy they left behind.

In addition to his role as Archives founder, Dave wrote Disney A to Z, the oft-cited Disney encyclopedia, as well as countless other titles. His connection to Disney started in 1967, when he began compiling an extensive bibliography on Walt Disney. He spent more than a year researching all Disney publications and productions.

When the Disney family and studio management began attempting to preserve Walts papers, awards and memorabilia, it was only natural for them to contact Dave to do a study and provide guidance. Dave was eventually selected as archivist, and in the years since the Archives was established, it has come to be recognized as a model among corporate archives across the country.

Its because of Daves vision, and his passion and his efforts that the Walt Disney Archives is still going strong today and is bigger than ever, Becky said. With new technology that we have today, we are doing things a bit differently But the core values that Dave instilled in us will always inform our mission to protect, preserve and share the rich history of The Walt Disney Company and to support the creation of all of the magic yet to be.

Like our friend Jiminy [Cricket], Daves work has helped to guide and shape us into who we are today and it is evident in our cast, our resort and our amazing company, Ken said. There is no greater wish come true than to realize that your contributions have served so many, so well. And as time moves on, Dave’s work will be more important than ever because it provides us with a lasting connection to the past.

Next time you visit, be sure to keep your eyes up along Main Street, U.S.A., and take a moment to reflect on Daves life and legacy.

Union in talks with Ovo Energy over job cuts...

Dealing with mental health issues brought on by the...

Next warns of higher prices as costs rise

Some Afghan girls can wrestle, play sports, and work...

Western officials warn of a potentially long war in...

‘The Gabby Petito Story’ Set to Begin Filming This...

Air traffic across Germany disrupted due to walkouts

The West Vows to Turn the Screws on Russia

More Cubans immigrating to the US by crossing from...

POLITICO Playbook: Could Trump blow the midterms for the...

Climber from Japan presumed dead after crevasse fall in...

Macron: Europe needs to defend its sovereignty in space

The Democratic Party’s emerging priority: Save the governors!

Boy, five, was fatally stabbed at his Coventry home