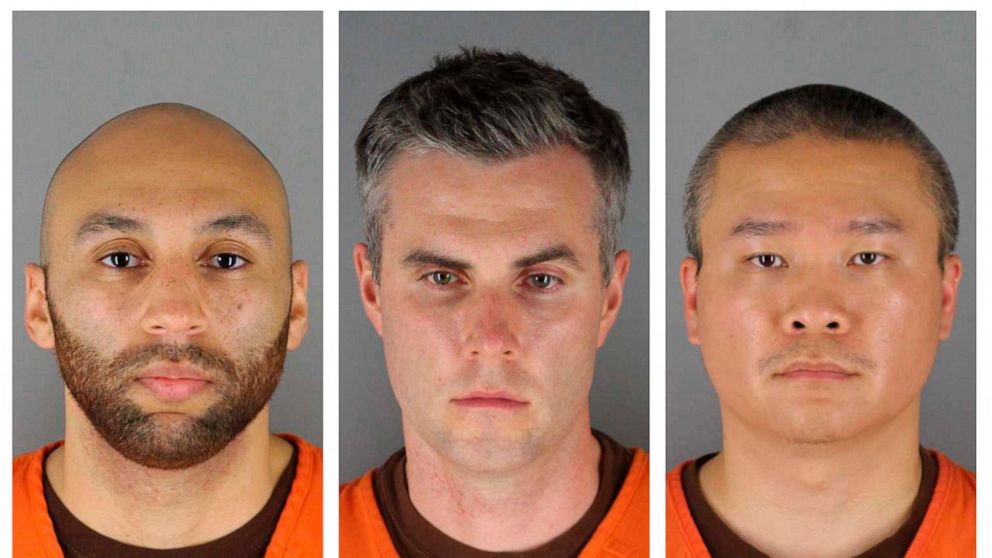 MINNEAPOLIS — Three former Minneapolis police officers on trial on federal civil rights charges in the killing of George Floyd arent as familiar to most people as Derek Chauvin, a fellow officer who was convicted of murder last spring.

Defense attorneys for Thomas Lane, J. Alexander Kueng and Tou Thao used parts of their opening statements Monday to humanize the officers, all of whom were swiftly fired after Floyd’s killing on May 25, 2020.

Lane and Kueng were the first officers to respond to a report that Floyd had tried to pass a counterfeit $20 bill, and they helped Chauvin restrain Floyd. Thao, the second-most senior officer on the scene after Chauvin, held back a group of bystanders shouting at the officers to get off Floyd while he was handcuffed, facedown on the street.

Lane and Kueng were rookies just a few days into their jobs as full-fledged officers. Though both took note of Floyds deteriorating condition Kueng remarked that he couldnt find a pulse, and Lane asked if they should flip Floyd onto his side neither tried to stop Chauvin as he pressed his knee into the handcuffed Black mans neck.

Heres a further look at the three former officers:

Thao was Chauvin’s partner that day. Thao, a Hmong American, had been with the Minneapolis Police Department for around 11 years, starting as a community service officer, a program meant to foster diversity by grooming potential cops. He had been a full-fledged police officer for more than eight years.

Thao joined the force part time in 2008 while attending North Hennepin Community College. He was laid off temporarily at the end of 2009 during a budget crunch. He also previously worked as a security guard at Boston Scientific facilities in the Minneapolis area, as a supermarket stocker and as a trainer at a McDonalds.

City records show six complaints were filed against Thao. He was also the subject of a 2017 federal lawsuit accusing him and another officer of excessive force. In the lawsuit, Lamar Ferguson claimed that in 2014, Thao and his partner stopped him and beat him while Ferguson was on his way to his girlfriends house. The suit was settled for $25,000.

The day of Floyd’s killing, Thao acted as a human traffic cone who was trying to make sure approaching cars saw the officers on the ground, his attorney, Robert Paule said.

He also said Thao made a call to increase the urgency of a medical call so that the ambulance would use its lights and siren to reach the scene.

Lane, who is white, joined the department in early 2019 as a 35-year-old cadet much older than most rookies. He had no complaints in his file.

He followed three generations of men from his mother’s family into the Minneapolis Police Department, including a great-grandfather who was once the police chief, Lane’s attorney, Earl Gray said.

His previous jobs included stints as a corrections officer at Hennepin Countys juvenile jail and as an assistant probation officer with a Ramsey County residential program for juvenile offenders. The University of Minnesota graduate also said on his employment forms that he had done volunteer work tutoring Somali youth and at-risk elementary school students, and with a police activities league for kids on Minneapolis predominantly Black north side.

Gray called Lane, 38, a gentle giant in his opening statement: Big guy, but he’s not mean. He noted that the Lane’s wife was in court and said the couple are expecting their first child.

He said Lane agrees that he had a responsibility to care for Floyd and did everything he could possibly do to help George Floyd.

Gray said Lane asked if they should use what’s known as a hobble restraint on Floyd, which would have involved putting Floyd on his side, and said if Chauvin hadn’t rejected it, Floyd would be alive today.

He told jurors that Lane’s concern for Floyd extended to getting into an ambulance and doing chest compressions in an attempt to revive him.

Kueng, who is Black, was the youngest of the four officers at the scene. He was partnered with Lane that day. He was raised by his mother in north Minneapolis.

Family members told The New York Times in 2020 that Kueng, the son of a white mother and Nigerian father, wanted to become a police officer to bridge the gap between police and the Black community. Two of his siblings have spoken out critically about his role in Floyd’s killing.

His personnel file, which says he speaks, reads and writes Russian, did not list any disciplinary actions.

Kueng was a 2018 graduate of the University of Minnesota, where he worked part-time in campus security. Like Thao, he was also a community service officer. He also worked nearly three years as a theft-prevention officer at the former Macys in downtown Minneapolis. And he worked short stints as a stocker at the downtown Target store, and as a youth baseball and soccer coach in Brooklyn Center.

Kueng and family members traveled to Haiti to volunteer after the 2010 earthquake, according to relatives and his attorney.

Defense attorney Tom Plunkett highlighted Kueng’s rookie status and said he was thrust into events with inadequate training and experience. He also highlighted Kueng’s upbringing in a culturally and ethnically diverse home and noted he once dreamed of being a soccer player.

Find APs full coverage of the killing of George Floyd at: https://apnews.com/hub/death-of-george-floyd

US Black population: The biggest growth is in smaller...

Kid Rock tells Tucker Carlson that he is ‘uncancelable’

Uber Struggles in Saudi Arabia as Rules of the...

French army watches for bombs and potholes as it...

Russia intensifies strikes around Kyiv as it warns US...

MasterChef production to move to Birmingham

Covid: Pressure on PM despite cabinet support and Djokovic...

The History of Amsterdam’s Canal Houses

‘The Book of Boba Fett’ Ending Explained: Did the...

Novak Djokovic back in detention as he fights deportation...

‘The Other Orange’ – the Dutch club where Cruyff’s...

Man Rescued After Getting Stuck in Chimney of Home...

New US envoy to Japan meets Kishida, vows to...

Here Comes The Sun: “The Godfather” anniversary and some...

Ukraine war could worsen crises in Yemen and Afghanistan

Explainer: A guide to the Philippines election – Reuters.com

AP PHOTOS: Ukraine volunteer fighters come from near and...

Ukraine war: WHO says attacks on hospitals are increasing...

Britney Spears says she is pregnant after conservatorship ends

Celebrity birthdays for the week of May 1-7

U.S. considering controlling exports to Russia if there is an invasion of...