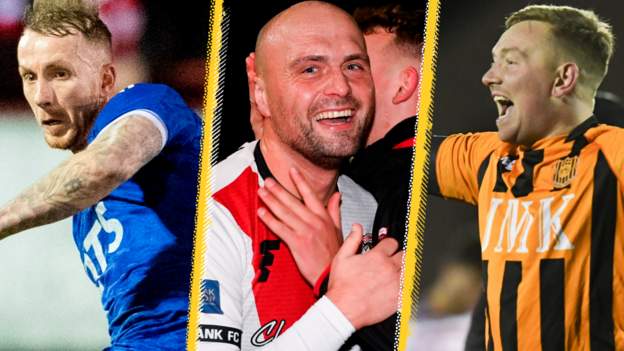 Berwick Rangers in 1967. Stenhousemuir in 1995. Clyde in 2006. Brora Rangers last season. Just a few of the glorious Scottish Cup giant-killers who have left the road to Hampden littered with tattered reputations.

The big clubs have it all to lose again in Saturday’s fourth round, with Premiership teams entering the fray.

Will there be another famous scalp to add to the competition’s long and illustrious history? Here are some of the underdogs sizing up a shock…

Auchinleck Talbot – giants of junior football until their recent switch to the senior game – love putting on a show for the cameras.

Three years ago, the team from the East Ayrshire village of Auchinleck lapped up the limelight when they toppled local rivals Ayr United in the last 32 at a bouncing Beechwood Park.

They then fell to Hearts in a meeting that has become something of a tradition. Talbot succumbed to a late fourth-round defeat at Tynecastle in 2012 and the sides meet at the same stage this weekend.

The Premiership club will be taking nothing for granted. Talbot claimed arguably the biggest upset of the previous round when they humiliated Hamilton Academical – who play four tiers above them in the Championship – with a 1-0 home triumph.

And Hearts fell victim to a humdinger of a shock last season, bowing out with a whimper in the second round to Highland League side Brora.

The marvels of Darvel

What is it with East Ayrshire and plucky upstarts? The marvels of Darvel, hailing from the same region as fellow West of Scotland Premier side Talbot, are putting their small town on the map in the club’s first-ever Scottish Cup campaign.

Having already claimed the scalp of League 2 Stranraer, and edged past Brechin City on penalties, the sixth-tier club bankrolled by bakery boss John Gall will be no piece of cake for Championship leaders Arbroath.

The sum total of Darvel’s previous honours is one Ayrshire League title in the 1960s, but they are now a rising force with plenty of dough at their disposal and a squad packed with experience from higher levels.

A tie with League 2 Kelty Hearts should be a doddle for the Scottish Cup holders St Johnstone, right? Far from it. Top of the bottom tier v bottom of the top tier is ripe with upset potential.

Kelty, having appointed former Rangers and Hibs midfielder Kevin Thomson as manager last summer, are absolutely tearing it up in their first season in the SPFL, scorching clear in League 2 and going unbeaten until Boxing Day.

The Fife club’s only loss at home in any competition came in their opening game, when they ran top-flight Dundee United close before conceding late on.

With the likes of former Rangers midfielder Jamie Barjonas, free-scoring striker Nathan Austin – 18 goals in 22 games this season – and experienced forward Kallum Higginbotham in their ranks, Kelty are destined for bigger things.

They will be relishing the prospect of taking down St Johnstone who have lurched into crisis after last season’s incredible Scottish and League Cup double. The Perth men are two points adrift in the Premiership and have lost 10 straight games.

Aberdeen-based Banks o’Dee are the only junior club left standing and find themselves in unchartered waters, having reached the fourth round for the first time.

Their title is no misnomer – a hoofed clearance out of the ground could plonk into the River Dee. That’s what happened in 2017 when an Under-19 player sent the ball over the fence and it washed up 1,000 miles away in Norway.

Back on dry land, the club’s Spain Park ground and artificial surface has proved a secret weapon as League 1 East Fife were turned over there in the previous round.

Premiership promotion hopefuls Raith Rovers be next to come a cropper, but Banks o’Dee captain Kane Winton misses out on the biggest occasion in the club’s history after a costly booking in the last round.

Alloa Athletic were a Championship team last season and are hardly minnows compared to some of the clubs left on the road to Hampden.

However, a meeting with Celtic casts the League 1 strugglers as huge underdogs, and extra spice is provided as Alloa are managed by Rangers legend Barry Ferguson.

The Wasps could hardly be in worse form – they haven’t won in nine league games and are just a point outside the relegation places.

They at least have nothing to lose against Celtic, who have already reclaimed the League Cup this season and are looking to likewise in the Scottish Cup after lifting the trophy your seasons running until last term.

The Bankies are back

Is there still a team in Clydebank?

In their previous incarnation, Clydebank – where mercurial Scotland winger David Cooper launched his career – played in every division of the domestic game and made it as far as the Scottish Cup last eight four times. Their best run saw them bow out 2-0 to Celtic in the 1990 semi-finals.

By 2002 the good times were over. The club were homeless, doomed to extinction and ended up being bought out by newly-formed Airdrie United.

From the ashes, a phoenix club was established in 2003-04 and began life in the junior ranks. Now part of the West of Scotland League, Clydebank are back in the Scottish Cup this season for the first time in 20 years.

Having already knocked out SPFL sides Elgin City and Clyde, the visit of Annan Athletic to Holm Park will hold no fears for the battling Bankies.

EK in a hurry to make history

There’s more to East Kilbride that loads of roundabouts and being Ally McCoist’s home town, with a leisure centre named in his honour.

East Kilbride FC were only formed in 2010, through an amalgamation of local sides, but are a thriving community operation with more than 20 teams and 500 players from Under-10 through to adult.

Their top team plays in the Lowland League, the level below the SPFL, and dreams of promotion to the big time and professional status.

EK’s first crack at the Scottish Cup came in 2014, and two years later they had the biggest game in their history when they reached the fourth round, bowing out 2-0 to Celtic. ‘Jackass’ and the rise and fall of prank content...

Timeline of Chelsea in the Roman Abramovich era –...

How China Wants to Control Messaging at Olympics

Beadnell: The coastal idyll with a lack of affordable...

Jeff Bezos’ superyacht will cause historic Rotterdam bridge to...

‘Everything Everywhere’ Movie Creators Reveal the Easter Eggs You...

Nurses Strike Across the U.S. to Protest Covid Working...

Teens Gunned Down at Post-Prom Party Attended by Hundreds:...

The U.S. recorded the highest number of rabies deaths...

Party over before it gets started – Reuters