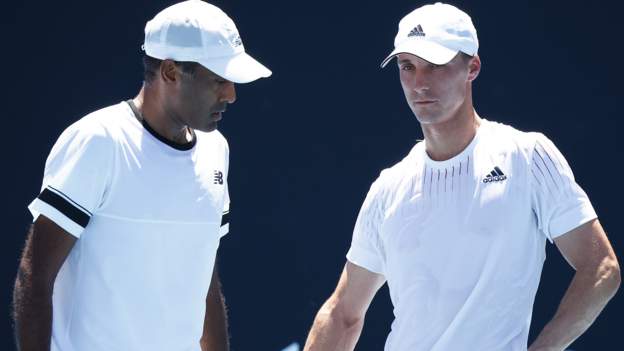 Britain’s Joe Salisbury continued his bid for a second Australian Open men’s doubles title as he and American Rajeev Ram progressed to the third round.

They will face Australian pair Dane Sweeny and Li Tu next.

There was also defeat for Heather Watson and Italy’s Jasmine Paolini in the women’s doubles.

The two lost 6-4 6-3 to Ukrainians Dayana Yastremska and Marta Kostyuk. In Mexico, an entire town has its cross to...

Inflation rises to near 40-year high

Pokémon Go players are being overwhelmed by April Fool’s...

Biden to propose new tax on the uber rich

Ever Forward, stuck in Chesapeake Bay, evaluated by experts

Live Updates | US moves to end exports to...

Small-Cap Stocks Sinking Below Support Level Is Warning for...

Pharmacy Worker Punched in Face as She Tries to...

Sex Pistols to re-release God Save the Queen ahead...

EU Green Policies Back on the Table

‘Partygate’ report delivered to Boris Johnson after months of...

Lateral flow tests: Should I recycle the plastic?

Asia Picks Up the IPO Slack With Record Run...

I made air fryer donuts so well, my partner...

One of UK’s most wanted men Alex Male arrested...

Riverdale prepares for the end with a final season...