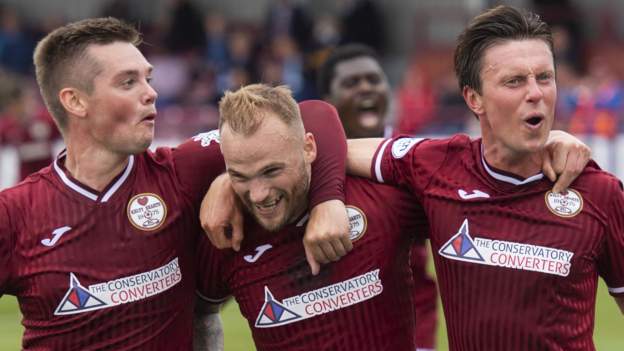 “It was always the plan and, without being arrogant, we’re lucky the plan’s been executed. A lot of hard work has made it happen.”

Formed 47 years ago, Kelty started in the game’s junior ranks and as recently as four years ago joined the East of Scotland League. They were soon promoted to the Lowland League and last season reached League 2 via the SPFL play-off.

The play-off victory against Brechin City was masterminded by former Rangers and Scotland captain Barry Ferguson. But, after promotion, he joined Alloa Athletic and was succeeded by his former Ibrox and international team-mate, Kevin Thomson.

Now the Fife club are well placed for another promotion. They sit top of their division, seven points clear with a game in hand, and face St Johnstone in the Scottish Cup on Saturday.

Kelty’s ascent up the leagues is reminiscent of Gretna’s in the early 2000s, but that ultimately ended in financial collapse.

However, Mckenzie is adamant that Kelty’s model is sustainable.

“Of course there’s been luck involved, but there’s been a lot of hard work from previous managers, the team on the pitch and the team we’ve got here off the pitch,” Mckenzie says. “It just seems to have worked. We’ve invested a bit of money, but clubs have invested before and it’s not worked.

“If we get promoted this year, and we still have four months of very hard work to go, the club will be fully sustainable. Hospitality is sold out, attendances are up to 700 average.

Kevin Thomson has led Kelty to the top of League 2

“Next season, with the extra revenue from the clubs in there [League 1], we’ll be sustainable.

“Personally, I’ve invested about half a million pounds over the years in facilities and players. It’s not a loan against the club, it’s my hobby. I’m lucky enough in business to be able to be able to afford it – it’s my passion.

“Look at the pleasure I get every Saturday, the pleasure in the village. I’m a football guy and love my football.”

Around 60 miles from Kelty, fellow Fifer Dick Campbell’s Arbroath are grabbing headlines at the top of the Championship.

“Before this season, you’d probably have said there is a ceiling – to be the best part-time club in Scotland – but Arbroath have blown it out the water,” McKenzie says. “What a job Dick’s doing up there and the chairman and board.

“Could Kelty do what they’re doing? I don’t know, but every other part-time club will have that dream and we’ll just do our best and see where it takes us.

“I talk to Dick on the phone and what a job he’s doing and it’s a great inspiration for every part-time club and hopefully they can keep it going.”

Cup shock on the cards?

On Saturday, the focus turns to the Scottish Cup and knocking out the holders, St Johnstone.

Indeed, Saints may seem like a more achievable scalp for Kelty after the Perth club’s recent travails.

After winning both of last season’s domestic cups and finishing in the Premiership’s top six, Callum Davidson’s side sit bottom of the top flight after nine straight defeats.

Saints have waited a long time since their last win

“There’s no pressure on us,” Mckenzie insists. “I’ve said to Kevin, the gaffer, if we lose three, four, five nil, who cares? We’ll still have a beer after it and celebrate a good day.

“The pressure will be on St Johnstone, the run they’re on. They’re obviously the holders and we’ll just do our best.” Brexit: Protocol issues can be ‘ironed out quickly’

Putin “has given himself every option” for Ukraine, top...

How To Watch Donald Trump’s Pennsylvania Rally For Dr....

How to Watch Trump Rally in Austin, Texas: Time,...

On baseball’s opening day, what teams are worth watching...

Sinema speaking on Senate floor ahead of Biden meeting...

Treasury blocks Russia from paying debt out of U.S....

Intel CEO Is Tired of Wall Street Doubting His...

Factbox: Restrictions vs protections: How U.S. states are taking...

Wolverhampton schoolboys record charity cover of Let It Be...

No, the Fed cannot engineer a soft landing, but...

The Beatles and John Lennon memorabilia to be sold...

Cost of living: Tourism feels the pinch as prices...