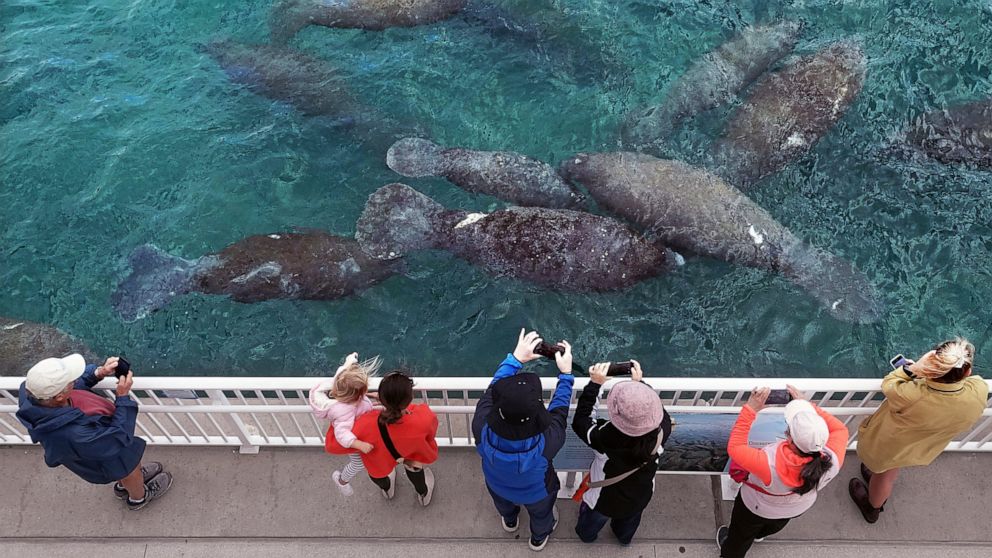 ST. PETERSBURG, Fla. — Manatees at risk of starvation because native seagrass is dying due to water pollution have for the first time started eating lettuce under an experimental feeding program, Florida wildlife officials said Friday.

The test facility on the east coast’s Indian River Lagoon had its first takers of romaine lettuce Thursday, leading more manatees to join in, said Ron Mezich, chief of the efforts provisioning branch at the Florida Fish and Wildlife Conservation Commission.

We think it’s significant, Mezich said in a remote news conference. When the animals are there, we will continue to offer food and hope they take advantage of that.

The program is adding cabbage and a second type of lettuce to entice the manatees, also known as sea cows. All of these are common foods given to manatees at rehabilitation facilities.

The unprecedented feeding program is a state and federal response to last year’s record number of 1,101 documented manatee deaths. Many are starving to death because pollution from agricultural, urban and other sources has triggered algae blooms that have decimated seagrass beds on which manatees depend especially during cold winter months.

About 25 to 35 manatees were seen Friday near the feeding site at a Florida Power & Light plant that discharges warm water the animals favor when water temperatures cool. Several hundred were spotted from the air in nearby areas, said Tom Reinert, south regional director for the FWC.

There are no immediate plans to expand the feeding program beyond Brevard County, officials said. It remains illegal for people to feed wild manatees on their own.

This is a pilot program and we’re trying to learn as much as we can, Reinert said. But he added that seagrass restoration and a reduction in water pollution are the long-term answers to the starvation problem.

We need a healthy lagoon to support the seagrass, he said. We can’t feed all of them.

In addition to the feeding experiment, officials are working with a number of facilities to rehabilitate distressed manatees that are found alive. These include Florida zoos, the SeaWorld theme park and marine aquariums. There were 159 rescued manatees in 2021, some of which require lengthy care and some that have been returned to the wild, officials said.

There are about 7,520 wild manatees in Florida waters currently, according to state statistics. The slow-moving, round-tailed mammals have rebounded enough to list them as a threatened species rather than endangered, although a push is on to restore the endangered tag given the starvation deaths.

Texas is using their ‘muscle’ to force Mexico to...

Is Sony cooking up a sequel to the best...

U.S. rejecting most Afghans’ requests to come to America...

Iceland volcano was so beautiful, I had a little...

Do optimists live longer? Of course they do

Women’s Ashes: Review system to be used for first...

Could a higher protein intake lead to healthier eating?

Dog missing for 12 years is reunited with family

Clinton campaign lawyer not guilty on charge of lying...

Cost of living crisis: Third of Scots cut back...

Texas man charged with murder after fatal shooting of...

China on the right side of history over Ukraine...

First Ever Recording of Dying Brain May Shed Light...