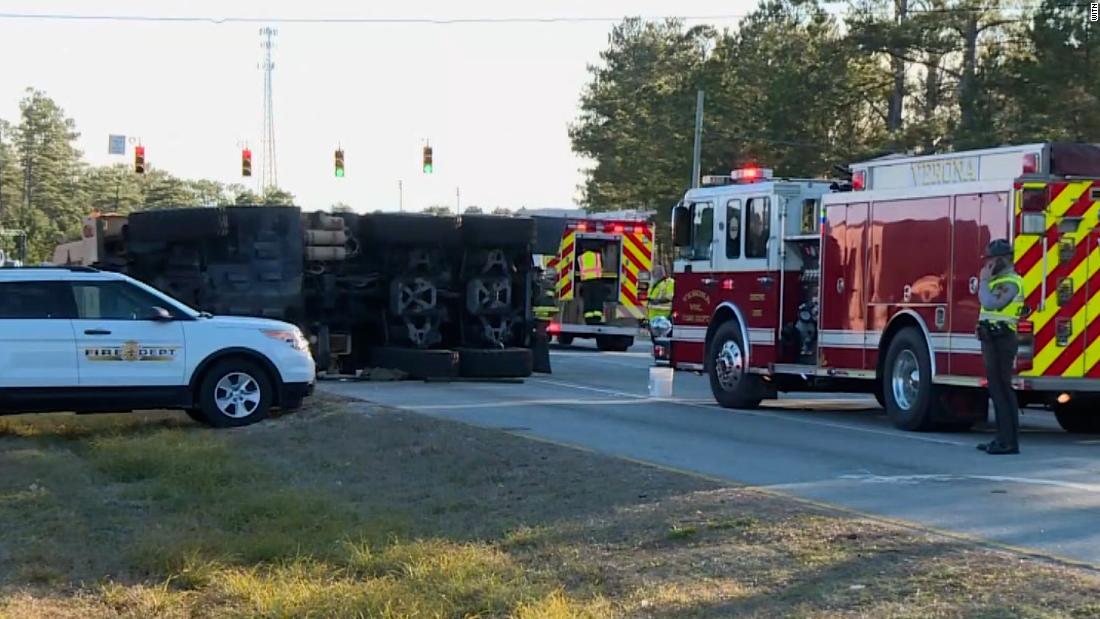 (CNN)A US Marine is facing charges after a military tactical vehicle he was driving overturned near Camp Lejeune in North Carolina on Wednesday, killing two service members and injuring 17 others, officials said.

The crash happened around 1 p.m. at the intersection of US 17 and Highway 210 in Jacksonville, the state highway patrol said.

The vehicle was attempting to make a right turn at the intersection when it overturned into the median, throwing 17 passengers out of the vehicle, a statement from the North Carolina Highway Patrol said.

“A second military vehicle being operated behind the initial vehicle was unable to come to a stop and struck one of the ejected passengers,” the statement said.

The vehicle involved in the crash is described as “a medium tactical vehicle replacement (MTVR) — more commonly referred to as a “7-ton” — which is used primarily for troop and equipment transportation purposes,” according to the statement.

The driver of the vehicle that overturned was identified by the highway patrol as 19-year-old Louis Barrera. He was charged with one count of Exceeding a Safe Speed and two counts of Misdemeanor Death by Motor Vehicle, troopers said.

CNN has been unable to determine whether Barrera has retained an attorney.

“I send our deepest condolences to the family and friends of the U.S. Marines who lost their lives in a tragic accident today in Onslow County,” North Carolina Gov. Roy Cooper said on Twitter Wednesday. “We are so proud of our military heroes at Camp Lejeune and across North Carolina. Our prayers go out to them.”

Preparing for what’s next: Technology and compliance in GCC...

NATO chief to stay on for extra year: report

Applications to the Startup Battlefield 200 close this week...

On The Money — January jobs report may show...

Open source developers, who work for free, are discovering...

Netflix to charge global members sharing their accounts an...

Opinion | A Tale of Two Speeches in Biden’s...

Huge trade relationship at stake as China and EU...

US job openings remain near record high in February

Kidney transplant: ‘I look at her and know she’s...

Uvalde city council to consider leave of absence for...

Dogs Can Get Cancer by Sniffing One Another’s Butts

EXPLAINER: Why is China so angry over UN report...

Rayner: Potential criminality has been found in Downing Street

Powerball glitches are frustrating players as the $1.5B jackpot...

How God of War Made Accessibility a Core Part...

Promising Alzheimer’s drug needs to be studied for safety,...

Nvidia RTX 4080 and other next-gen Lovelace GPUs could...

In Putin’s Ukraine quagmire, echoes of Soviet failure in...

‘We are the alternative’: A growing movement aims to...

Banksy: The stories behind his ‘Great British Spraycation’

The New American System: Trade for Workers in the...

African fossils show ‘monster’ could have lived in Loch...

Google is failing to protect users and contractors post-Roe,...

Tory Frontrunner Truss Declines to Give Detail on Plans...

Portugal on wildfire alert amid heat wave and severe...

Jury selection to start in federal trial over Floyd's death