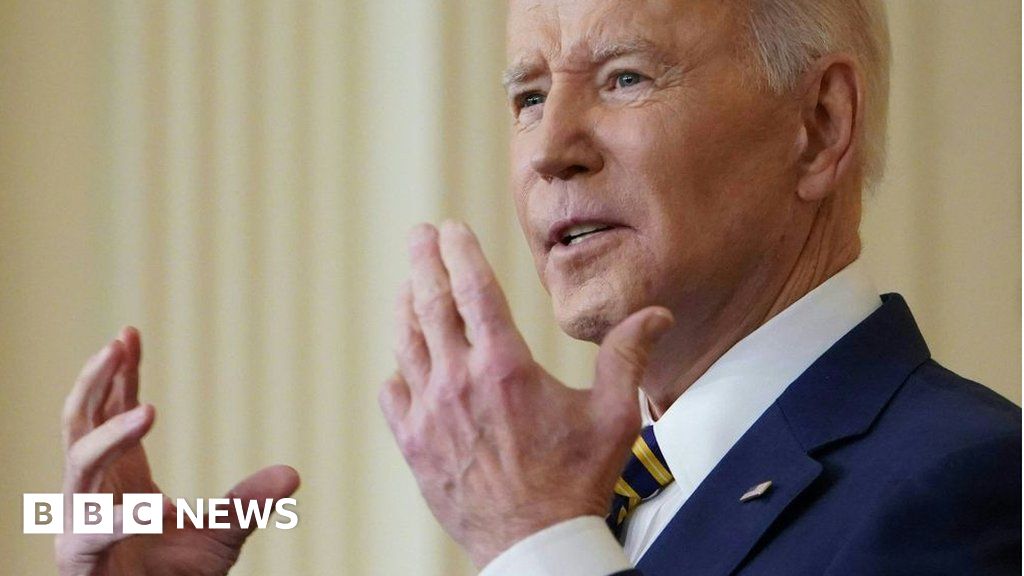 US President Joe Biden has suggested the 2022 midterm elections could be “illegitimate” if his plan to overhaul the US voting system is not passed.

In a White House news conference, he argued voting integrity hinged on his bid to enact the most sweeping changes to US elections in a generation.

He also conceded shortcomings on Covid testing and social distance messaging, but pledged: “It will get better.”

For the first time, he vowed to retain Kamala Harris as his 2024 running mate.

“I’m not saying it’s going to be legit,” Mr Biden said when asked about the possibility of fraud in the November congressional elections, which will decide the balance of power in Washington.

“I think it could easily could be illegitimate,” he said, in an apparent reference to new laws passed by Republican state houses that Democrats argue are intended to make voting more difficult for their constituencies.

“The increase in the prospect of being illegitimate is in direct proportion to us not being able to get these reforms passed,” the Democratic president continued.

Members of his own party quickly pushed back against the suggestion. “We might have a little difference of opinion on that one,” West Virginia’s Joe Manchin – whose objections have stalled the president’s legislative agenda – told CNN.

Mr Manchin was one of two party rebels who refused to go along with a radical rule change to Senate procedure in order to pass two bills designed to widen voting access.

Maryland Senator Ben Cardin said: “I don’t know if I’d use those terms.” He added that new state voting laws that Republicans argue will prevent fraud were “very troublesome”.

Earlier in his remarks on Wednesday in his second ever solo White House press conference, Mr Biden said that the legitimacy of the election “depends on whether or not we’re able to make the case to the American people that some of this is being set up to try to alter the outcome of the election”.

Mr Biden has previously attacked the state voting laws, which Republicans say are needed to prevent voter fraud, as an “attack on democracy”, and warned that the rioters who invaded the US Capitol a year ago would rise up again in the absence of federal voting laws.

According to the Brennan Center for Justice, 19 states passed 34 new voting laws in 2021.

In a White House conference lasting nearly two hours, Mr Biden took questions on a range of issues, including Russian-Nato tensions in Ukraine, his failed voting rights legislation, his Build Back Better social spending plan, the withdrawal from Afghanistan and his mental health.

Despite having so far failed to enact much of his agenda, he denied “overpromising” to the American public and instead argued he has “outperformed” expectations, pointing to declining Covid deaths as evidence.

“Can you think of any other president who’s done as much in his first year?” he asked a reporter. “Name one for me.”

Occasionally cracking jokes, he also took a defiant tone at times, especially when asked about a recent speech on voting rights in which he cast his opponents as civil rights-era racists.

For the first time, he pledged to keep Vice-President Kamala Harris amid reports of a possible split, answering simply: “Yes.”

The first-term president also lamented opposition to his domestic agenda from within his party, adding “I’m not asking for castles in the sky.”

Mr Biden’s defence of his record comes as his approval rating has sunk to around 42%.

Compared with other recent presidents, only Donald Trump has had a more disappointing first year.

His approval rating fell from 45% on his inauguration day to 35% a year later, according to historical trends by Gallup. I got married this week, and these five iOS...

Sweden sees infection peak at end of January amid...

Alphabet to acquire Mandiant for $5.4 billion

What Investors Learned From the Elizabeth Holmes Trial: ‘Zero’

Pentagon spokesperson: US looking at sanctions against Russia ‘the...

2021 was a massive year for internet traffic

Zelensky urges Ukrainians not to panic

The man who lived in a Singapore forest for...

Noor Muqaddam: The high society beheading that stunned a...

Britain will not flinch over Ukraine, Boris Johnson tells...

Retail sales up 0.3% in February amid higher prices