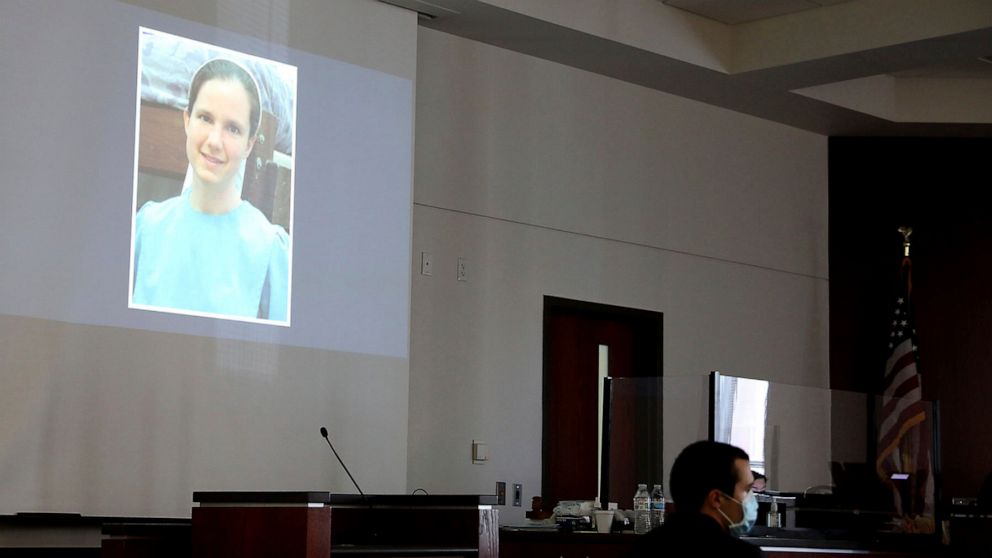 FLAGSTAFF, Ariz. — An Air Force airman convicted of kidnapping a woman from a Mennonite community in New Mexico and fatally shooting her in northern Arizona is set to be sentenced Wednesday.

Mark Gooch faces life in prison for the death of Sasha Krause. The two didn’t know each other but both grew up in big families and in the Mennonite church. Krause joined, but Gooch rejected the faith and enlisted in the Air Force.

A Coconino County jury convicted Gooch, 22, of kidnapping and first-degree murder in October. Prosecutors argued he was driven by a disdain for the Mennonite faith, exhibited in text messages exchanges with his brothers. Gooch’s attorney tried to raise doubt with jurors that Gooch was responsible.

Krause went missing on Jan. 18, 2020, as she was gathering material for Sunday school outside the Mennonite church in Farmington, New Mexico. She had visited her family for the holidays in Grandview, Texas, less than three weeks earlier.

The Krauses didn’t have a habit of taking family pictures, but Robert Krause said he had a feeling they might not have the chance to get together again. So they gathered in front of a cabinet that displayed dishes and took serious and silly photos.

Sasha Krause pulled out of the driveway at dark and bumped up against a pickup truck, knocking off her passenger side mirror as she started a 14-hour drive back to Farmington. Her parents were worried that she was traveling alone, but Robert Krause said she made it back safe, only to disappear weeks later.

The community’s frantic search for Krause turned up nothing.

A camper gathering firewood outside Flagstaff, Arizona, spotted a body in a forest clearing more than a month later and alerted authorities. It was Krause, laying face down with her hands bound with duct tape. The 27-year-old had been shot in the head.

Authorities used cellphone and financial records and surveillance video to tie Gooch to Krause’s disappearance and death. He was stationed at Luke Air Force Base in metropolitan Phoenix, hundreds of miles away from the Farmington church he said he visited in search of the fellowship of Mennonites that he remembered as a child growing up in Wisconsin.

Gooch has been jailed since his arrest in April 2020.

A Luke Air Force Base spokesman said proceedings to discharge Gooch will start after he’s sentenced in the Arizona case.

Krause’s parents said they won’t be at the sentencing hearing but wrote to Coconino County Superior Court Judge Cathleen Brown Nichols to say Sasha Krause was a good sister, conscientious, eager to read at a young age and determined. She had a sense of confidence that her sisters sometimes took as bossy, they wrote.

They shared pictures of Krause reading to children, with her family and on a snowy outing in Colorado so the judge could see her as more than a victim, Robert Krause told The Associated Press.

Sasha Krause was baptized into the Mennonite church at age 12, learned Spanish and taught school for six years in Grandview. She played a part in raising her younger siblings.

In Farmington, she worked at the publishing ministry called Lamp and Light. She continued writing poetry and learned French. She also was preparing to move into her own trailer.

Her parents said they will never understand why their daughter was kidnapped and murdered but said it had to be part of God’s plan.

God will use her death for His glory, and I am convinced He has eternal purposes for Sasha that we can only guess about, from here, they wrote.

Gooch did not testify during the trial. He grew up working on his family’s dairy farm and went to school through the eighth grade. His father, Jim Gooch, testified that his son left the Mennonite faith and joined the military because he lacked a converted heart.

The Farmington Mennonite Church Community addressed a letter directly to Gooch ahead of the sentencing hearing, although it’s unclear if he’ll see it. They described his crimes as heinous but wrote that they believe he has some remorse and urged him to repent fully. Minnesota made the $2.04 billion Powerball winner in California...

Roommate indicted in death of LGBTQ advocate whose brother...

RSV symptoms: What to look for and how to...

The Cynical Spectacle of Sarah Palin’s Lawsuit Against the...

Russia’s war in Ukraine: How it came to this

Zaghari-Ratcliffe, Ashoori back in Britain after being freed from...

Dispute over maintenance works at the Royal Infirmary of...

‘America’s Got Talent’ To Undergo Huge Change for Live...

Watching Zelenskyy’s ‘Servant of the People’ satire on Netflix...

How Sabbaticals Can Help Recruit and Retain Talent

Sony snaps up ‘Halo’ and ‘Destiny’ creator Bungie for...

How to stream Lollapalooza on Hulu this weekend

Christian Wakeford: Defecting was most difficult decision I've ever made
Cheeky hack-and-slash RPG ‘Nobody Saves the World’ is available now