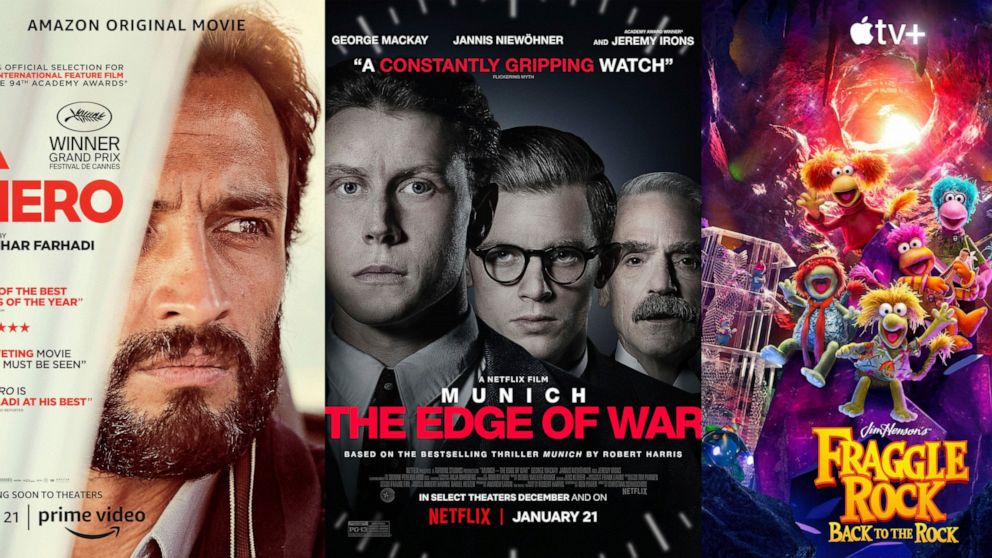 Heres a collection curated by The Associated Press entertainment journalists of whats arriving on TV, streaming services and music platforms this week.

Iranian filmmaker Asghar Farhadi latest masterpiece, A Hero, comes to Amazon Prime Video on Jan. 21. AP Film Writer Jake Coyle wrote in his review that this saga about a good deed gone wrong, in which a man imprisoned for a debt returns a bag of gold to its owner, is, one of the most labyrinthine moral tales youre likely to encounter… Farhadis film grows increasingly knotty with fictions to cover truths, and vice-versa.

The Sundance Film Festival kicks off Thursday night and, like last year, it is entirely virtual and movie lovers from around the world can buy tickets to see the films when they premiere from the comfort of their homes. Opening night offerings on Jan. 20 include La Guerra Civil, a documentary about the rivalry between Oscar De La Hoya and Julio César Chávez in the 1990s directed by Eva Longoria, Jesse Eisenbergs directorial debut When You Finish Saving the World, starring Julianne Moore, and The Princess, a documentary about Princess Diana that turns the lens on the audience. Or if you cant score tickets to any of the Sundance films this year, MUBI is programming some breakouts and underseen gems of years past, like But Im a Cheerleader (Jan. 23), Tarnation (Jan. 20) and Whirlybird (Jan. 22).

Its the fall of 1938 and tensions are boiling over as Hitler readies to invade Czechoslovakia and Britain seeks peace in Munich: The Edge of War, coming to Netflix on Friday. Based on the book by Robert Harris, this fictional tale directed by German filmmaker Christian Schwochow centers on two old Oxford classmates, one British (George MacKay) and one German (Jannis Niewöhner), who are sent to the Munich Conference for negotiations. Jeremy Irons plays Neville Chamberlain and Ulrich Matthes is Hitler.

In the fall of 2021, two quintessentially American singer-songwriters got together for a song about making the most of the time we’ve got left. John Mellencamp and Bruce Springsteen’s Wasted Days is just one highlight of Mellencamp’s upcoming album, Strictly a One-Eyed Jack, set for release Friday. Mellencamp’s gravely voice and rootsy rock are all over the 12-track collection, the sound of an artist looking back with some regret and at the present with a critical eye. Worries occupy my brain, he sings in one song. It’s not all gloomy, though: In the single Chasing Rainbows, Mellencamp says our search should end: At the end of the rainbow/Turns out its not somewhere/Look around its everywhere/For anyone who cares.

Norwegian pop star Aurora album is back with a divine new album, The Gods We Can Touch, out Friday. This time she leans into religion and Greek myths, like the track Giving In to the Love, which was inspired by Prometheus stealing fire for humans and has the line: I want to live my life, be all of its pages/And underline that I am not an angel. The lead single, Cure For Me, is a radical jaunty pop affirmation that dismisses the need for outside approval.

Keb Mo releases the 13-track album Good To Be on Friday. Darius Rucker, Kristin Chenoweth and Old Crow Medicine Show all make guest appearances and Vince Gill produced three cuts. Some of the singles include Good Strong Woman, Sunny and Warm, The Medicine Man and a cover of Bill Withers Lean on Me. The album was written between Nashville and his childhood home in Compton, California. The sunny, welcoming Good To Be (Home Again),” the musician says, “feels like the title track to my life.

When a title is as catchy as How I Met Your Mother, theres reason to think it will be recycled. Say hello to Hulus iteration, How I Met Your Father, with Hilary Duff as the woman searching for love and a tale for future offspring. Kim Cattrall, who skipped the sequel to Sex and the City, is Sophie circa 2050, filling her son in on his origin story and her frisky salad days. Co-stars Christopher Lowell, Francia Raisa, Tom Ainsley, Tien Tran and Suraj Sharma play friends and others in Sophies circle. The series debuts Tuesday.

Writer-producer Jason Katims, who gifted TV with Friday Night Lights and Parenthood, is steering Amazons As We See It, an adaptation of an Israeli series about 20-something roommates navigating the road to adulthood. Jack (Rick Glassman), Harrison (Albert Rutecki), and Violet (Sue Ann Pien) share something else: They are all on the autism spectrum. (The actors playing them also identify as being on the spectrum). The eight-episode comedic drama, which also stars Sosie Bacon, Chris Pang and Joe Mantegna, is out Friday.

Its party time again for Gobo, Red, Mokey, Wembley and Boober on the Apple TV+ reboot Fraggle Rock: Back to the Rock, debuting Friday. New friends are also promised in the 13 puppet-populated episodes with roots in the 1983 series created by Muppets mastermind Jim Henson. Signature elements: Bouncy tunes, silly jokes and good will. The streaming service also is home to the original shows 88 episodes, along with Fraggle Rock shorts and specials. Three doctors charged in death of pregnant woman in...

UK economy grows more than expected in May

Washington Was an Icon of Black Political Power. Then...

As Snarls Mount, Economists Take a Walk on the...

‘Too many entrances’: GOP response to Uvalde massacre has...

Royal rebranding: What will happen to stamps, coins, banknotes...

Russia promises to curtail some military activity as progress...

Why More and More Expats Are Leaving Hong Kong

As Feb. 16 passes by, Biden administration pressed on...

Sexton calls out Biden’s hypocrisy over ‘ministry of truth’...

A Bridge Protest Ends. The Pandemic’s Cost Is Still...