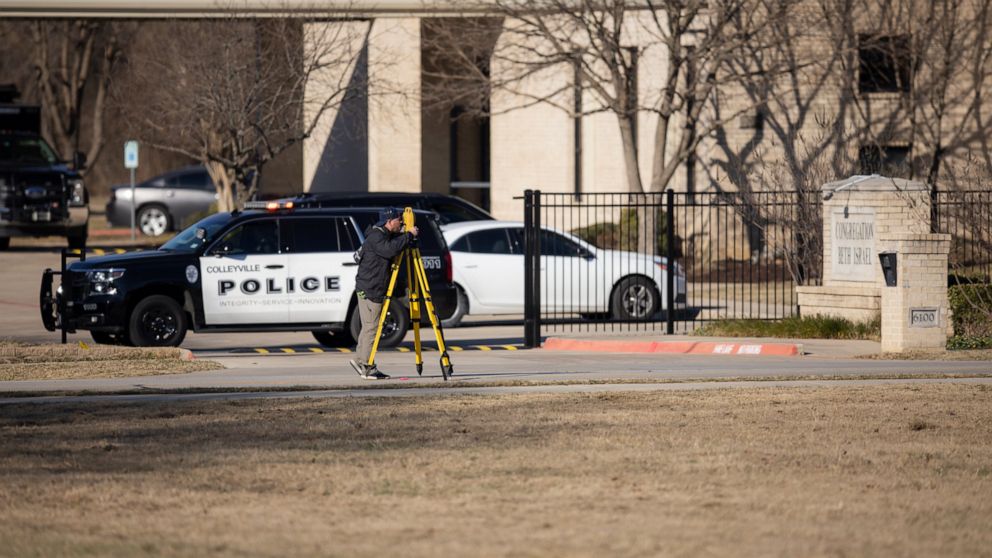 COLLEYVILLE, Texas — An armed man who took four people hostage during a 10-hour standoff at a Texas synagogue had spent time in area homeless shelters in the two weeks leading up to the attack, and was dropped off at one by someone he appeared to know.

Malik Faisal Akram, a 44-year-old British national who authorities identified as the hostage-taker, was brought to the shelter in downtown Dallas on Jan. 2 by a man who hugged him and had conversations with him, said Wayne Walker, CEO and pastor of OurCalling, which provides services to homeless people.

He was dropped off by somebody that looked like he had a relationship with him, said Walker, who said they’d turned photos and video over to the FBI.

Rabbi Charlie Cytron-Walker told CBS Mornings that he’d let Akram into Congregation Beth Israel on Saturday morning because he appeared to need shelter. The synagogue is in Colleyville, a city of about 26,000 people located 30 miles (48 kilometers) northwest of Dallas.

Cytron-Walker said the man wasn’t threatening or suspicious at first, but later he heard a gun click as he was praying.

The rabbi and three other men were participating in the service that was being livestreamed when they were taken hostage. The first hostage was released shortly before 5 p.m. Cytron-Walker and two others escaped around 9 p.m., when Cytron-Walker threw a chair at the gunman.

The exit wasnt too far away, Cytron-Walker said. I told them to go. I threw a chair at the gunman, and I headed for the door. And all three of us were able to get out without even a shot being fired.

Akram was killed after the hostages ran out. Authorities have declined to say who shot Akram, saying it was still under investigation.

Video of the standoffs end from Dallas TV station WFAA showed people running out a door of the synagogue, and then a man holding a gun opening the same door just seconds later before he turned around and closed it. Moments later, several shots and then an explosion could be heard.

The FBI on Sunday night issued a statement calling the ordeal a terrorism-related matter, in which the Jewish community was targeted” and said the Joint Terrorism Task Force is investigating. The agency noted that Akram spoke repeatedly during negotiations about a prisoner who is serving an 86-year sentence in the U.S. The statement followed comments Saturday from the special agent in charge of the FBIs Dallas field office that the hostage-taker was focused on an issue not specifically related to the Jewish community.

Akram could be heard ranting on a Facebook livestream of the services and demanding the release of Aafia Siddiqui, a Pakistani neuroscientist suspected of having ties to al-Qaida who was convicted of trying to kill U.S. Army officers in Afghanistan.

The last hour or so of the standoff, he wasnt getting what he wanted. It didnt look good. It didnt sound good. We were terrified,” Cytron-Walker told CBS Mornings.

At a service held Monday evening at a nearby Methodist church, Cytron-Walker said the amount of well-wishes and kindness and compassion has been overwhelming.

Thank you for all of the compassion, from the bottom of my heart, Cytron-Walker said.

While very few of us are doing OK right now, well get through this, he said.

The investigation stretched to England, where late Sunday police in Manchester announced that two teenagers were in custody in connection with the standoff. Greater Manchester Police tweeted that counter-terrorism officers had made the arrests but did not say whether the pair faced any charges.

President Joe Biden called the episode an act of terror. Speaking to reporters in Philadelphia on Sunday, Biden said Akram allegedly purchased a weapon on the streets.

Federal investigators believe Akram purchased the handgun used in the hostage-taking in a private sale, according to a person familiar with the matter who spoke on condition of anonymity because the investigation is ongoing. Akram arrived in the U.S. at John F. Kennedy International Airport in New York about two weeks ago, a law enforcement official said.

Akram arrived in the U.S. on a tourist visa from Great Britain, according to a U.S. official who spoke on condition of anonymity because the information was not intended to be public. Londons Metropolitan Police said in a statement that its counter-terrorism police were liaising with U.S. authorities about the incident.

U.K. Home Secretary Priti Patel told the House of Commons on Monday that she had spoken to her U.S. counterpart, Alejandro Mayorkas, and offered the full support of the police and security services in Britain in the investigation.

After staying at the OurCalling facility on Jan. 2, he stayed in another Dallas homeless shelter.

An FBI spokeswoman said late Monday night that they did not have any information they could confirm regarding Akrams stay at the OurCalling facility. The agency has said there was no early indication that anyone else was involved in the hostage-taking.

Akram stayed three nights between Jan. 6 and Jan. 13 at Union Gospel Mission Dallas, the homeless shelters CEO, Bruce Butler, told CNN. According to their records, Akram left there for the last time on Jan. 13 two days before he took the hostages at the synagogue.

Akram used his phone during the course of negotiations to communicate with people other than law enforcement, according to a law enforcement official who was not authorized to discuss an ongoing investigation by name and spoke on condition of anonymity.

It wasnt clear why Akram chose the synagogue, though the prison where Siddiqui is serving her sentence is in Fort Worth.

An attorney in Texas who represents Siddiqui said Monday that Siddiqui had no connections to Akram.

She said from the beginning when she was sentenced that she does not want any violence done in her name and she doesnt condone any type of violence being done, said attorney Marwa Elbially.

Akram, who was called Faisal by his family, was from Blackburn, an industrial city in northwest England. His family said he’d been suffering from mental health issues.

We would also like to add that any attack on any human being, be it a Jew, Christian or Muslim, etc. is wrong and should always be condemned, his brother, Gulbar Akram, wrote. You can finally connect Discord to your PS5 –...

The US should prepare for a predictable Southern summer...

Pennsylvania Senate candidate Fetterman will have heart procedure after...

From worms to war: The unlikely beginnings of NATO’s...

Hedge Fund Hell: How the Tech Crash Is Clobbering...

Diehl doubles down on Trump

Heysham explosion: Woman in court over gas blast that...

Who Stars in ‘Attack on Titan’s’ Final Season English...

Ukraine: The small town which managed to block Russia’s...

Goldman Sachs to pull out of Russia

Sasaram: How thieves stole a 60-foot-long bridge in Bihar

Eni Profit Jumps on Prices, But Investors Won’t Get...

Greg Gutfeld: It's a great time to be alive if you're criminally...