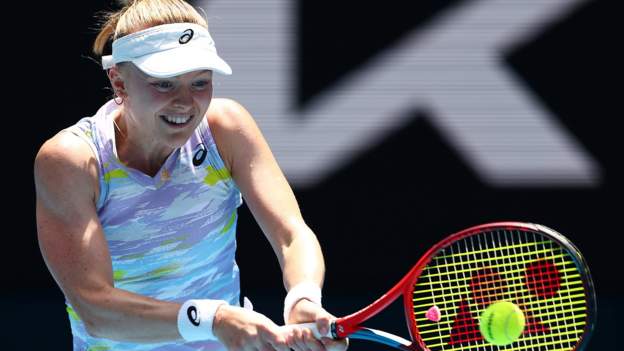 Harriet Dart has not yet beaten a top-10 player, having lost five times against those opponents

British qualifier Harriet Dart was unable to maintain a strong start as she lost in the Australian Open first round to seventh seed Iga Swiatek.

Dart, 25, broke for a 2-1 lead in the first set as she settled quickly and hurt Swiatek with some classy winners.

But Poland’s Swiatek, 20, found her rhythm, winning five games in a row to turn the match in her favour.

The 2020 French Open champion continued her high level in a one-sided second set to wrap up a 6-3 6-0 victory.

After coming through Melbourne qualifying for the third time in her career, 123rd-ranked Dart was handed another plum first-round draw which again put her on Rod Laver Arena.

A chastening experience on her debut in the 15,000-seater arena saw 2008 champion Maria Sharapova show no mercy in a 6-0 6-0 thrashing three years ago.

In 2019, she pushed former world number one Simona Halep before succumbing to a 6-2 6-4 defeat.

Drawing one of the WTA Tour’s rising stars put Dart back on Laver and hoping for better results than her two previous appearances.

With the benefit of having won five matches at Melbourne Park in a warm-up tournament and qualifying, Dart started confidently before Swiatek’s quality shone through.

Who Is Morgan Ortagus?

Anti-Hezbollah Lebanese Forces party says it has won at...

How rising inflation is impacting businesses and families across...

12 Marketing KPIs you should be tracking

The Samsung Galaxy Watch 4 could soon make the...

Sustainability has never been more important for tech CEOs

Encryption supporters gear up for another EARN IT fight

Wordle now has a football spin-off – here’s how...

Food has become a weapon in the war in...

Authorities: Man who killed his three children in Sacramento...

Brian Kilmeade shares the goal of ‘One Nation’ with...

Eileen Gu is the poster child for a new...

Ukraine war: A dangerous escape on the ‘Rescue Express’

NHS under huge strain as A&Es turn away ambulances

War in Ukraine: Surrogate babies wait for parents in...

Democrats look to diversify ranks in bid to keep...