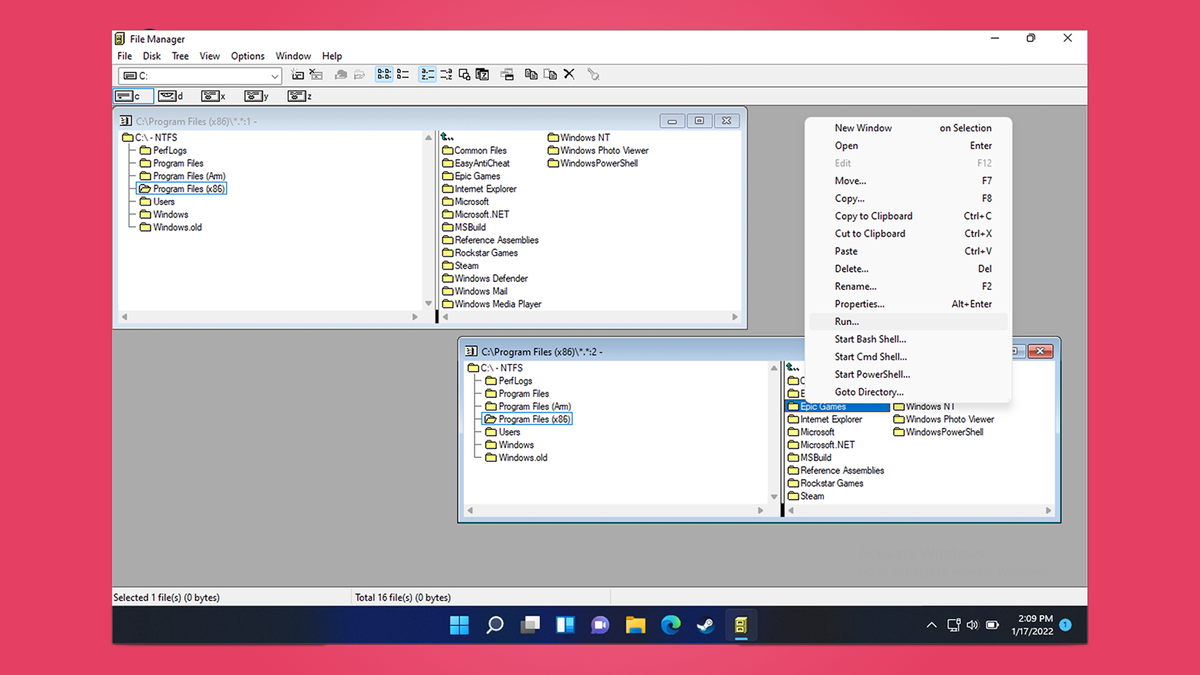 The first iteration of managing your files and folders has been remade and released for Windows 10 and Windows 11 users, giving you a useful alternative to Windows Explorer.

File Manager first appeared back in 1990 with Windows 3.0, where it was the only way to add, delete and manage your files and folders. But following the appearance of a graphical user interface and Windows Explorer with Windows 95, it was eventually retired in 1999.

But there were some users who loved the control that File Manager gave them, and that control is something that’s seemingly missing or hidden with Windows 11 in Explorer.

With File Manager, almost every feature was discoverable either through an icon at the top of the window, or when you right-clicked a folder, but in Windows 11 currently, some features, such as Command Prompt and ‘Copy’, are displayed through a right-click menu or in an Options menu at the top of the Explorer window.

Thanks to the source code having been released back in 2018, this rewritten version

has been headed up by Microsoft Azure Architect Craig Wittenberg, you can drag and drop files into the app, alongside a search function, and much more. You can download it from GitHub or directly from the Microsoft Store

to use on your PC to manage your files like it’s 1990 all over again.

Using File Manager in 2022 through Windows 11 is, to pardon a phrase, like stepping through a window to 1990. While the appearance of this File Manager may be overwhelming to some users, who may be used to a more elegant appearance for a user interface, the features it offers are very helpful.

Whereas in recent years with Windows Explorer, you’d have to go to the Taskbar or a different app to reach some of the features that exist in a right-click menu in File Manager, such as ‘Run’, ‘Move’ or ‘Go to ‘Directory’. Every function is accessible in a few clicks, and thanks to the tree layout of your files and folders, you gain a better overview of where your content is, alongside how you can manage these files across multiple hard drives for example.

But it also shows how far interfaces and methods in computing have evolved in 30 years. It would be unimaginable now to start up Microsoft Edge

through a command line, for instance, or use physical media such as Floppy Disks to play God of War in 8K

Looking at Explorer in Windows 11, there’s plenty that could be influenced by File Manager. The inclusion of different view options to more clearly display folders and what they contain, alongside the facility to browse multiple windows in one Explorer window rather than separate ones, would be much more useful than what we have now.

With the next major update of Windows 11, Sun Valley 2

on its way, there’s always a chance that we could see further improvements to Windows Explorer that takes everything about what File Manager still does so well, and repackages it for a 2022 audience.

Credit Investors Gripped by ‘Sell What You Can’ Mood...

Russia says it has dismantled the REvil ransomware gang

Hearts squeeze through on penalties in the Scottish Cup

First on CNN: Damage to Snake Island, where Ukrainian...

It’s hard to get excited for the Google Pixel...

What happens in divorce when digital bullying is in...

Polls open in 1st round of France’s presidential election

Biden: No plans to speak with Putin amid ‘rupture’...

Aunty’s Beach House to Reopen at Aulani Resort May...

NBA roundup: Knicks rally from 25 down to top...

Sunny Hostin: Will Smith slap of Chris Rock was...

Corporations seek to rebuild bridges with GOP objectors ahead...

Minister urges people to be ‘sensible’ over pay

Cars stuck on motorway as snow causes disruption across...

Zelensky meets with Harris: Ukraine army ‘defending all of...

House votes to bolster efforts to educate public about...

How Elon Musk could impact Twitter’s battles over speech...

When Will China Be the World’s Biggest Economy? Maybe...

Mother of child killed in Texas: “Her favorite color...

Graham ramps up tension with Jackson: ‘I think you’re...

Northern Ireland Protocol: What do voters think of it?