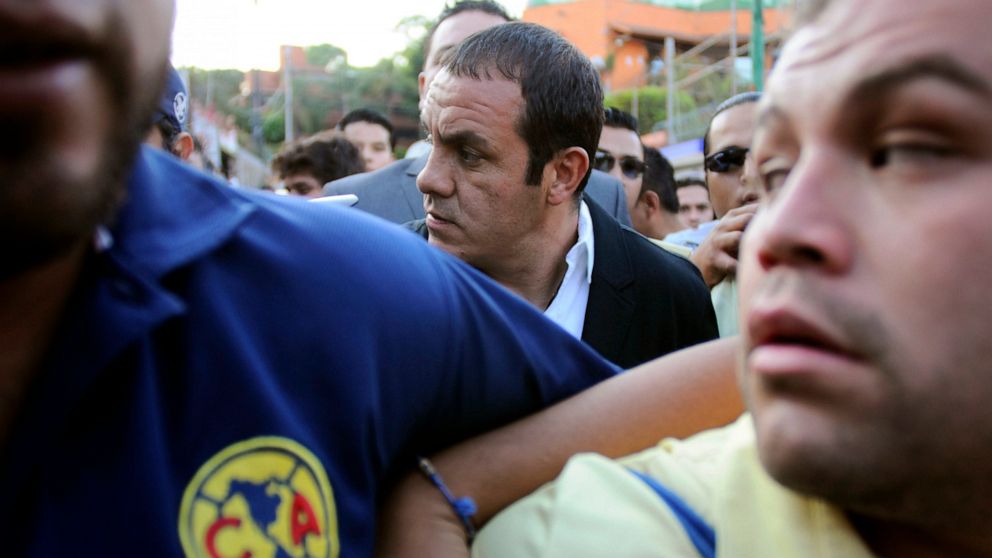 MEXICO CITY — The governor of Mexicos Morelos state claimed Monday his predecessor and the previous police chief negotiated with a drug gang.

Gov. Cuauhtémoc Blanco had himself been forced to deny any drug links earlier this month after a 3-year-old photo surfaced showing him posing with three men identified as local drug gang leaders. But Blanco went on the offensive Monday, claiming ex-governor Graco Ramirez had made deals with a gang known as The Reds.

Blanco appeared at prosecutors’ offices to ask they investigate any allegations against him, saying I have nothing to hide, I don’t make deals with criminals.

Blanco also accused the former state police chief, Alberto Capella, of being in on the deals.

Capella said that was a lie intended to divert attention from Blanco’s own problems. In his Twitter account, Capella called Blanco ignorant, corrupt and perverse, and said that under Ramirez’s 2012-2018 administration, police had combatted The Reds with vigor.

Morelos, just south of Mexico City, was once known for its balmy climate, and as a quiet weekend getaway for Mexico City residents. But over the last two decades it has been plagued by kidnappings, extortion and killings.

A former Mexican national soccer team star, Blanco won the governorship of Morelos in 2018 after retiring from soccer. A photo from October of that same year shows him smiling and locking arms with three men, one of whom is under arrest and another who was killed in prison.

The third man is allegedly still alive and leading a gang called the Tlahuica Command that may have been involved in the 2019 killing of a community activist.

The newspaper El Sol de Mexico says the photo was found on the telephone of another drug suspect.

Blanco ascribed the photo to the dangers of being a former soccer star who would never deny a fan a photo op.

I have taken a lot of photos as a soccer player, Blanco said. He recalled a time when he was seen in a photo along with a son of imprisoned drug lord Joaquin El Chapo Guzman, noting I didnt even know who he was, but because Im such a good guy, I take photos with everyone.

Asked by reporters when and where the photo published this week was taken it appears to be indoors, in an office or dining room Blanco said I dont know, I swear, I dont even remember.

I take a lot of photos (with people), and I am not going to be asking them, hey, who are you and what do you do for a living? Blanco said.

I am going to continue taking photos, Blanco said defiantly. Perhaps more will come out.

Blanco previously served as mayor of the state capital, Cuernavaca. During his professional soccer career he was known for his pugnacious, combative style. As governor, Blanco has been criticized for naming former soccer associates to state posts.

Hackney schoolgirl strip-searched by Met Police was taken out...

Family heartbroken over death of man in Fife crash

“This is a poisoning:” Government, advocates work to fight...

What’s next for President Biden’s Build Back Better bill

Northern Ireland protocol: No trade war with EU if...

SK May Invest in Nuclear Firm Including Bill Gates’...

Yelp’s chief diversity officer calls for other companies to...

Nevada Republicans boo Heller over past with Trump at...

White House warns Russia could use chemical or biological...

Judge rules Oath Keepers leader to be transferred to...

Your Evening Briefing: Bitcoin Evangelists Look Into the Abyss

Nvidia could spring a surprise GPU launch next week

Femicide detectives: ‘Counting bodies is the best place to...

How Falklands War and rugby led to 40-year friendship