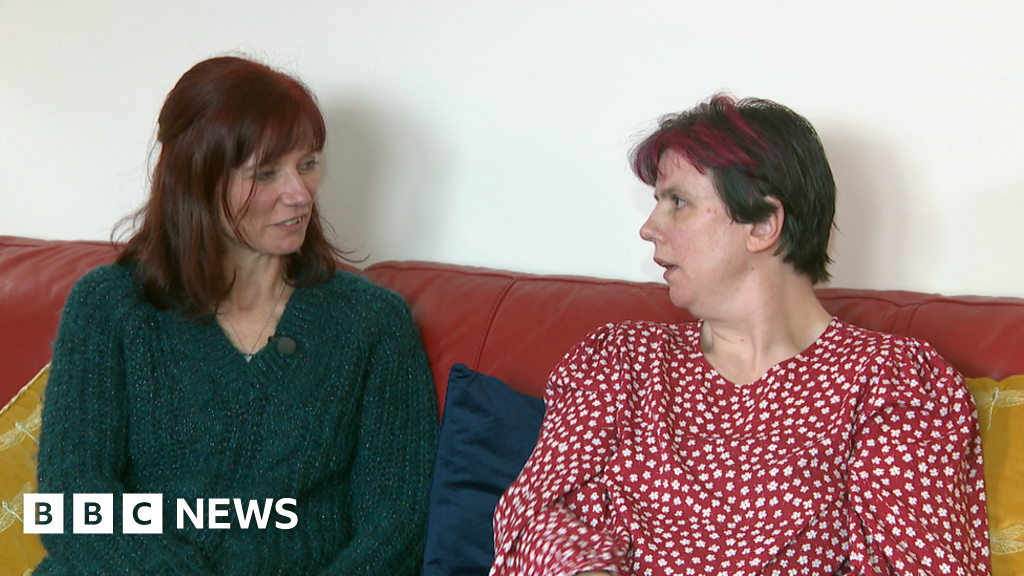 Media caption, Nova Cox who has autism and learning disabilities speaks with her sister Sarah about what is good about living independently

Hundreds of Scots with learning disabilities are being forced to live far away from their families or are stuck in hospital for months or even years, according to a report by a charity.

The Enable Group says it wants to end the practice of sending people away from their communities. BBC Scotland spoke to one of the families affected.

Nova Cox is 44, has autism and learning disabilities and has been in and out of different kinds of care her whole life.

She was living in England but when the pandemic hit she wanted to be back in Scotland and her family wanted her to come back.

The problem was, they couldn’t get her anywhere suitable to live close by.

What was being offered by her local council was not right for Nova; she wanted to live independently with carers to support her.

Her sister Sarah Cox told me about the fight they had with the local authority.

“When Nova moved up from Liverpool we had no placement for her here. It took a year for us to get something sorted,” she said.

“Nova was sofa surfing between me, my mum and my sister which was stressful for her because she’s autistic and she has challenging behaviour, but she managed very well.”

“Every other option was gone through first – from respite, to shared living, to even foster placement. Nova already has a loving, caring family, she doesn’t need to be fostered into somebody else’s family.”

Image caption, Sarah Cox says her sister now has her own flat with the support she needs

Last year, Jeanne Freeman announced the Community Change Living Fund: £20m to help reduce the problem of sending people away from their families and communities.

The BBC asked every local authority and health and social care partnership (HSCP) in the country what they had done or planned to do with the money.

Of the 15 replies we received, three areas planned to build and open more multi-bed units. One has put the money towards producing a video.

Jan Savage, director of the learning disabilities charity Enable, told BBC Scotland: “The intention of this funding is specifically to get people who have been stuck in hospital or who are out of area the support they need to come home.

Commenting on our findings, she expressed concern over the number of multi-bed units saying it was inappropriate to replace one form of institution for another.

She also said there was a lack of clarity around how the HSCPs should use the funding, or whether it is even sufficient.

“There is some good evidence of the start of joined-up thinking and of the HSPCs starting to plan ahead, but this money was announced a year ago, and the partnerships aren’t telling us how many people they’ve managed to help return home and even how many people this impact on in their areas,” Ms Savage said.

Nova isn’t the only person who has struggled to get appropriate care in the area they live.

In 2018 the Scottish government found more than 700 people to be living in out-of-area care, and figures the following year put the number at more than 1,000.

Enable, who has published a report on out-of-area care called “My Own Front Door”, said it was it a “national scandal hidden in plain sight”.

“It’s happening in your hospital, in mine and in our local areas. We need this to be addressed now,” Ms Savage said.

The charity is calling for the end to the practice of sending people away from their communities and returning everyone who wants to by next year.

The point, Ms Savage says, is to ensure that everyone who wants to come back home can – and that people have an appropriate choice of where and how to live.

“It’s an abuse of people’s human rights, it’s a human rights emergency because this population have been known about for some years and certainly since 2018 when the Scottish government first published the Coming Home report,” she said.

“While there has been some more investment into the system, we still don’t know today in 2022 what has happened to those people who were written about in 2018.”

The National Autistic Society says many of those on an out-of-area placement are on the Autistic spectrum.

Supporting Enable’s campaign, the society’s Rob Holland is calling for the government to publish the numbers to understand the scale of the problem.

“The Scottish government and NHS Scotland need to routinely record and publish data on the numbers of autistic people and people with a learning disability being sent away from their communities so we understand the scale of the problem,” he said.

“This is something other parts of the UK routinely report on so they have a much better idea of the situation and what they can do to address it.”

“We acknowledge that there are continuing challenges around people with learning disabilities and more complex care requirements who have spent an unacceptable amount of time in assessment and treatment units. Hospital is not a home,” the minister said.

It is a happy ending for Nova, though.

She’s got her own flat with the support around her that she needs. Crucially, she’s able to be near her family which ultimately enriches her life.

EXPLAINER: 2 men in Gov. Whitmer plot could be...

Storm Eunice: The O2 reopens after roof damaged during...

Climber from Japan presumed dead after crevasse fall in...

Johnny Depp back on the stand in lawsuit against...

New Zealand Urges Business to Be Ready for Omicron...

Tesla opens ‘Gigafactory’ near Berlin, its 1st in Europe

Will Sue Gray’s report into Downing Street parties be...

McDonald’s Sales of Its Plant-Based Burger Get a Boost...

Sanders says Biden can’t count on him to support...

Ukrainians can be considered for asylum at U.S.-Mexico border,...

Eagles vs Washington live stream: how to watch NFL...

For some who recently contracted Covid, an unexpected emotion:...

Bus rolls onto its side in Maryland, injuring 27

CDC doubles down on isolation guidelines after criticism, says...