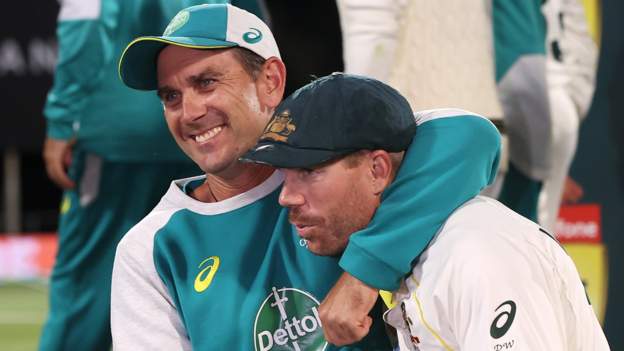 As far as head coaches go, you would rather be in Justin Langer’s shoes than in Chris Silverwood’s.

The England coach spent the fourth Ashes Test stuck in Melbourne with Covid-19 while his team produced its solitary show of resistance for the series, and was on hand to watch four losses.

He fronted up to the media in Hobart on Monday after the final defeat but his relatively brief tenure is widely expected to be over.

Australia’s coach got to watch all of his team’s wins, and can now point to the Ashes trophy that remains in the cabinet alongside the first men’s Twenty20 World Cup that he won only a couple of months earlier. It has been a profitable time for him.

Yet Langer is not guaranteed to stay in his job either, with the end of his four-year contract approaching this coming June, and with the need to move sooner than that to install a successor if the contract is not renewed.

That may seem like a curious move to be considering given his recent success, and his stated desire to stay in the job. Plenty of his former Australian team-mates who are now pundits, most influentially Ricky Pontingexternal-link

, have endorsed him in this regard, insisting that results overrule any other considerations.

But the equation is not as simple as Langer equalling wins. It is well known that a number of players were deeply frustrated with his coaching style in early 2021, and looked for assurances that his tenure would end with that contract expiry.

Whether this equanimity could be maintained if Langer signed on for extra years in the role is entirely unknown. It doesn’t look like there is flowering animosity in the dressing room, and all of the parties involved are probably quite fond of each other in different ways.

But working with the same people under intense pressure for long periods of time means that relationships start to pall. Dynamics grow stale. Resentments grow. Giving Australia’s long-term players some form of change might be better for them than clinging on to something purely because it has worked in the recent term.

Whatever the decision, Langer has had an important part to play for Australia. He took over a shell of a team representing a shaken cricket nation in 2018, with the sandpaper scandal yet to settle and the public still angry.

He worked closely with new captain Tim Paine to shift perceptions of Australia on the field, even if those stated commitments to honesty and integrity were later undermined by the manner of Paine’s departure in 2021.

The Ashes that have just concluded were by far the most friendly and decent in decades, with Australia’s players conducting themselves in a creditable way. It is no doubt easier to be good-natured while winning, but teams of the past were often even worse when they were ahead.

On the field, Langer rejuvenated the one-day team after a parlous couple of years, organised an Ashes retention in England where success had been hard to come by, and has added the more recent wins in short form and in long.

The Test team now looks far more formidable than it has for some years, with the emergence of Travis Head and Cameron Green settling almost every spot in the order. Langer was also one of the selectors who made so many good decisions with shifting the bowling attack in both of the past two Ashes series.

The only copybook blots have been a World Cup semi-final pasting in 2019 to the eventual winners England, and two lost Test series to visiting Indian teams, the first more excusable than the second.

Off the field, he might have done more to protest the relegation of Test cricket to the too-hard basket by administrators during the two years of the pandemic.

The achievements are notable, the failures less so. What lies ahead this year is Australia’s odyssey to Asia, with Test tours to Pakistan, Sri Lanka, and India, followed by a home World Cup with the T20 trophy up again.

All of these would be new challenges for Langer, and ones that he would relish tackling. It will be up to him and his players in the coming weeks to decide whether that would be the best choice for all of them, or whether it is time to end the legacy at a point of success and let the next stage begin. A break in the storm clouds – Reuters

Linux security systems have a rather damaging safety flaw

Give Fitbits (of Sorts) to the Trees

That Android antivirus could actually be malware

Australia agrees to $3.5 billion tank deal with US:...

Major winter storm could develop into bomb cyclone over...

House lawmakers who sided with DeSantis in map fight...

Windows 11 gets a boost for parental controls as...

Winter Olympics tickets won't be sold to general public due to COVID-19,...