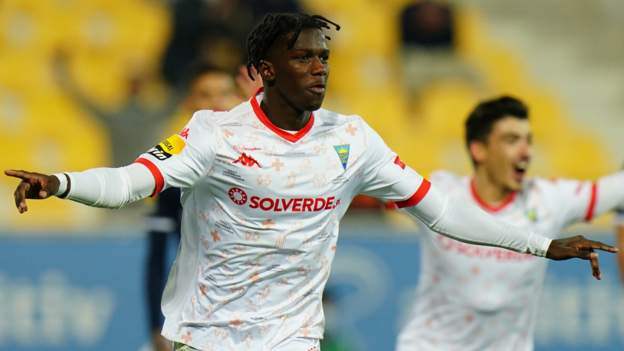 Chiquinho has scored three times for Estoril this season

Wolves are set to sign Portugal Under-21 winger Chiquinho from Portuguese club Estoril for an initial £3m.

The 21-year-old is due at the club for a medical today before signing a long-term contract.

A former Sporting Lisbon youth player, Chiquinho, who joined Esotril in 2019, has impressed during the club’s rise up to sixth in the Portuguese Primeira Liga.

He has scored three times in 15 games this season.

It is not clear whether Chiquinho will be part of manager Bruno Lage’s squad for the remainder of the Premier League campaign, or whether he will be allowed to leave on loan.

Tottenham are expected to try and make a move to sign Spain winger Adama Traore from Wolves this month.

Review: A novel with recipes pokes fun at church...

A guide to volunteering on MLK Day of Service...

The country where 30 farmers die each day

Adobe’s next Photoshop app could turn you into a...

Nearly 2 years after masks were required for US...

Hannity: Despite what he says, Joe Biden’s ‘pathetic, feckless, weakness’...

The Case for In-Person Tech Conferences

Scheffler, cool under pressure, closes in on Masters title...

This week on “Sunday Morning” (May 8)

Transcript of President Biden’s remarks in Warsaw on March...

Idaho state lawmaker calls for flags at half-staff in...

UK transport workers back merger with counterpart US union

Panthers have ‘inside track’ to land Baker Mayfield after...

Ronnie Spector’s husband says the ‘Be My Baby’ singer...

No. 1 Rahm shares lead with Thomas, Schenk at...

Vodafone is switching off its 3G network to boost...