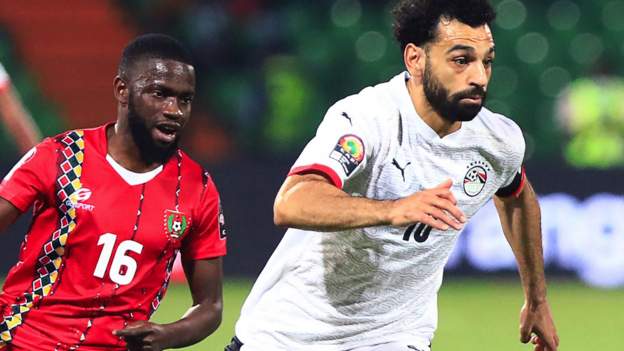 Mohamed Salah (centre, without shirt) scored the winner for Egypt against Guinea-Bissau

Guinea-Bissau players were “crying” in the dressing room after their agonising 1-0 defeat by Egypt at the Africa Cup of Nations, according to two stars of the Djurtus.

Liverpool’s Mohamed Salah scored in the 69th minute to put the Pharaohs ahead in the Group D game in Garoua, but Mama Balde had a stunning late equaliser for the Djurtus ruled out after a video assistant referee review.

“We’re bitterly disappointed because the referee’s decision to rule out that goal left many players lying on the floor in tears,” revealed Guinea-Bissau midfielder Pele.

“We know we did a very good job and we tried to win the game. All the players are disappointed and crying in the dressing room because we did our best to win this game.”

With nine minutes left, Balde cut in from the left and curled a shot just inside the right-hand upright, but the forward was adjudged to have fouled Egypt defender Omar Kamal in the build-up.

“I feel very bad because we all want to win. We don’t like to lose,” added Monaco’s Pele.

“To lose in this way is very bad and it left all the players in tears. But we will continue to show our determination to succeed.”

After picking up a point against Sudan and losing to Egypt, forward Frederic Mendy praised his side’s strong second-half performance against the Pharaohs, but was left gutted by the loss.

The 33-year-old, who plays for Vitoria in the Portuguese third tier, insists the VAR decision to disallow Balde’s goal was harsh on his side as they slipped to third in the group.

“We feel very frustrated because we cannot accept for the [Egypt] players asking the referee to check the VAR,” he said.

“That should be the decision of the referee to do by himself. You succumb to the pressure of the players and rule out our valid goal because it is heart-breaking to rule out a goal that is valid in our opinion.

“If we had drawn against Egypt, the most successful team in this tournament, it would’ve helped us a lot.

“We are very disappointed, angry and bitter about how it’s turned out. It’s unfair because we believe we scored a good goal.”

The Djurtus (Wild Dogs) made their Nations Cup debut in 2017 but lost all group games to exit the tournament, and in 2019 they suffered 2-0 defeats against Cameroon and Ghana before claiming a 0-0 draw with Benin to return home early.

This time around, Guinea-Bissau must beat Group D leaders and three-time continental champions Nigeria in their final group game on Wednesday (19:00 GMT) to have a chance of advancing to the last 16.

“Playing in a tournament like this is very important for us because it is an opportunity to show the world that our country Guinea Bissau may be a small nation and small team but we have great players,” said Pele.

“We have big hearts, we don’t give up and we fight for our country and make it proud.

“There is a big opportunity for us to reach the next round against Nigeria and that is what we are going to do.”

Ketanji Brown Jackson confirmed by Senate to the Supreme...

My journey down the rabbit hole of every journalist’s...

UFC: Paddy ‘The Baddy’ Pimblett ‘fed up of being...

China’s Solar Giants Have a Fix for Their Broken...

Markets, Currencies, And The Dollar (Podcast)

UK Conservative lawmaker praised for coming out as trans

GM to sell a gas-electric hybrid Corvette starting next...

‘Heartstopper’ helped me face unresolved trauma of life under...

In Greece, unvaccinated people 60 and up face monthly...

Russia-Ukraine Risk: A Who’s Who of U.S. Consumer Companies

Rescuers look for victims at Cuba hotel after blast...

Mila Kunis and Ashton Kutcher to match up to...

Scientists can detect COVID-19 in wastewater weeks before anyone...

Inside a Shanghai mass quarantine center: No showers, lights...

`No surrender’: Ukrainians fight on in Mariupol steel plant

Israeli ex-PM Netanyahu's cases could be dropped in plea deal

Amy’s Kitchen says its food is made with ‘love.’ Some workers tell...