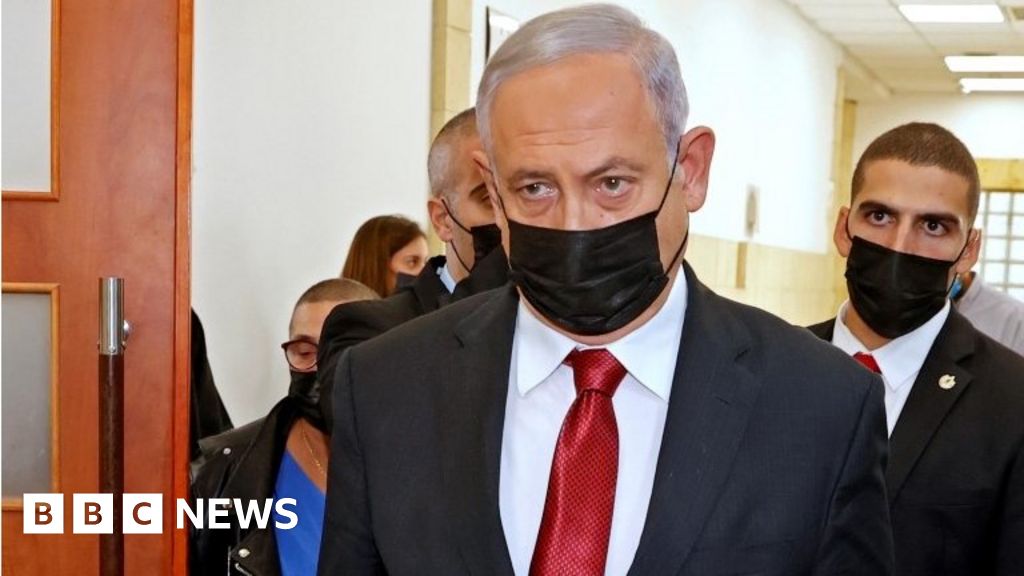 Former Israeli Prime Minister Benjamin Netanyahu is negotiating a plea deal which could end his corruption trial, a source close to the talks has said.

An agreement could see Mr Netanyahu, 72, plead guilty to reduced charges in return for community service instead of a possible jail term.

Reports say Mr Netanyahu is, however, objecting to accepting a charge which would require him to leave politics.

He is head of the right-wing Likud, the largest party in the Israeli parliament, and was prime minister for a record 15 years.

In his last five years in office, Mr Netanyahu was dogged by a police investigation into allegations against him, followed by the start of his trial in 2020.

He is accused of bribery, fraud and breach of trust in connection with three separate cases. He denies the charges against him, saying they are politically motivated.

Reports that Mr Netanyahu has been discussing a plea deal with Attorney General Avichai Mandelblit emerged in Israeli media in recent days. An unnamed source connected to the talks confirmed the negotiations on Sunday, news agencies said.

Israeli media say Mr Netanyahu has instructed his lawyers to continue the talks despite reported objections of his family to the prospect that he would accept a level of guilt.

Conviction on the latter charge alone – considered the most serious of the three cases – carries a jail term of up to 10 years and/or a fine.

The source close to the talks said that in return for the cases being dropped Mr Netanyahu is being asked to accept a charge of “moral turpitude”, which would ban him from politics for seven years – something which the former prime minister is said to be objecting to.

Mr Netanyahu, who has the solid support of his political base, has railed against the current coalition government and has said he aims to return to power at the earliest opportunity.

His years in office saw a deepening rift between the left and right in Israel, with weekly mass demonstrations against him in the final months of his premiership.

Polls reports in Israeli media on Sunday suggested that a majority of the country are opposed to a plea deal, with most believing his fate should be decided in court. Confronting history, to heal a nation

Opinion | Why the GOP Hawks Would Never Break...

Cardinals vs Rams live stream: how to watch NFL...

Ukraine conflict: Thousands of people try to force their...

New Fat-Busting Drug to Become Available Through the NHS

How Raffensperger went from Trump outcast to MAGA vanquisher

Spotify is testing a controversial new feature, and subscribers...

SpaceX’s Elon Musk is going into the carbon capture...

What we can learn from Nathan Chen’s redemption

Self-Driving Vehicles Are Here—If You Know Where to Look

PS Plus classic games sound much better than we...

Driving While Baked? Inside the High-Tech Quest to Find...

One in five reptiles is threatened with extinction

Till They Have Faces

Inside the Forecast: Ohio and Indiana kick off blitz...

‘Ray Donovan: The Movie’ gives the show another crack...

Ukraine envoy says it is the UN’s responsibility ‘to...

Balance of Power: State Of The Travel Industry (Radio)

US attorneys do not oppose lifting restrictions for Hinckley