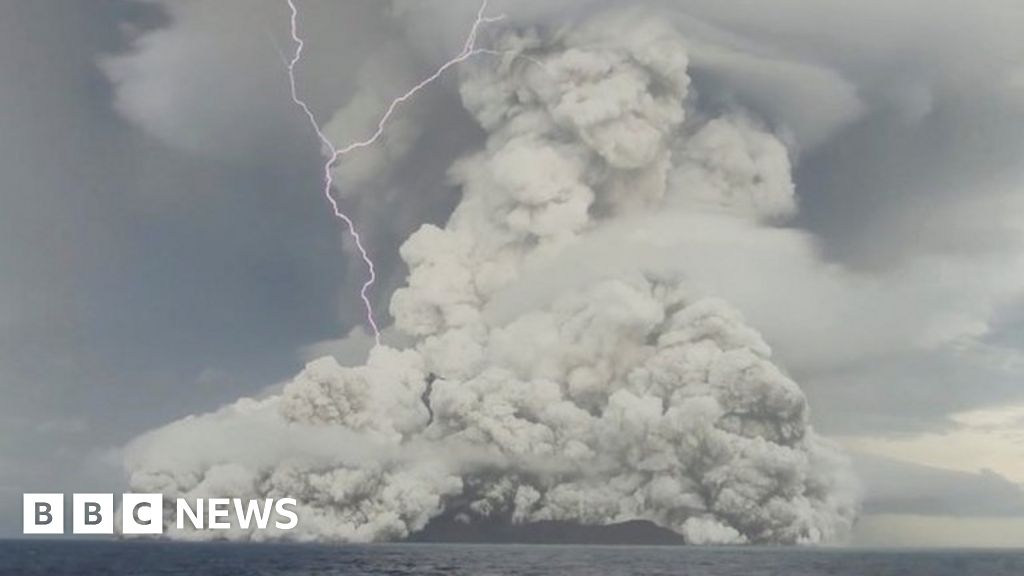 Significant damage has been reported after a tsunami hit the Pacific island nation of Tonga, but communications problems are making getting the full picture difficult.

The Hunga Tonga-Hunga Haapai volcano erupted on Sunday, about 65km (40 miles) north of the capital Nuku’alofa.

The eruption, which was heard as far away as the US, caused waves higher than a metre to crash into Tonga.

So far there have been no confirmed reports of injuries or deaths.

Friends and family of a British woman, Angela Glover, say she is missing. In social media posts, they say she was swept away in the waves.

Internet and telephone communications are extremely limited and outlying coastal areas remain cut off, leaving the real scale of the damage unclear.

“Significant damage has been reported along the western coast of Tongatapu, including to resorts and the waterfront area of northern Nuku’alofa,” the New Zealand High Commission in Tonga posted on Facebook, referring to Tonga’s main island.

“A thick layer of ash remains across Tongatapu,” it added.

The Ha’atafu Beach Resort on Tongatapu posted that the resort had been “completely wiped out” and “the whole western coastline completely destroyed,” according to family members who were based in Tonga.

It said those living there “just managed to get to safety running through the bushes and escaping,” and were “not able to save anything”.

Pacific correspondent for Television New Zealand Barbara Dreaver wrote in a Facebook post that it would take “at least two weeks before international phones and internet are working again,” due to damage inflicted on a critical submarine cable as a result of the volcanic eruption.

At UN, Russia’s war in Ukraine is both text...

Ukraine crisis: Five reasons why Putin might not invade

Renee MacRae: Accused chooses not to give evidence

Large Plume of Smoke Over Town as Fire Crews...

Sensational eagle and crowd lift McIlroy to top of...

First polio case in U.S. in nearly a decade...

How did Nikki Kuhnhausen’s murder inspire a new law?

Can you name the actors who play these characters...

The Italian version of fondue is so luscious, it...

Gambling disorder: ‘It took me to save Peter Shilton’

Eye Opener: Fourth of July travel back in full...

Number of US police officers murdered up by 59%...

Trial for US basketball star begins in Moscow-area court

The Witnesses Scheduled to Testify at Monday’s January 6...

Peacock has canceled an award-winning fantasy epic and fans...

In California, abortion and birth control could become constitutional...