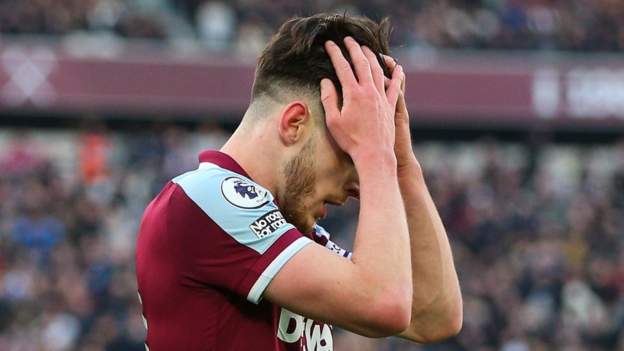 West Ham boss David Moyes has warned the Premier League that he may take a harder line on fixture rearrangements after his side lost to Leeds.

Twenty-one Premier League games have been postponed from their original dates because of Covid this season.

“Maybe I’m going to do that in the future.”

West Ham won their meeting with Norwich on Wednesday – a match shifted from 18 December after an outbreak in the Canaries camp – but Moyes says the energy expended in that victory put his side at a disadvantage.

“I think it was a huge factor today,” he added. “The people who are putting the games in place do not understand the importance of recovery.

“Today it caught up with us because the people who played against Leeds United know the intensity you need to play.

“It was really tough for us to get back out. We didn’t feel the Norwich game should have been put in; we let them know that but they refused our request. They wanted it played but it’s had an effect on today’s game.”

Moyes and Bielsa had a shortage of time and players, respectively, going into their teams’ meeting

The postponement of games has become a controversial issue, with Tottenham saying they were “extremely surprised” that the Premier League agreed to Arsenal’s request to move the teams’ derby from this Sunday.

Clubs can apply for postponements if Covid is a factor in them being able to field fewer than 13 players and a goalkeeper.

However, Arsenal’s player shortage included Thomas Partey, Mohamed Elneny, Pierre-Emerick Aubameyang and Nicolas Pepe – all away on international duty at the Africa Cup of Nations – and the suspended Granit Xhaka.

“The original intention of the guidance was to deal with player availability directly affected by Covid cases, resulting in depleted squads that, when taken together with injuries, would result in the club being unable to field a team,” said Spurs.

“We do not believe it was the intent to deal with player availability unrelated to Covid.

“We may now be seeing the unintended consequences of this rule. It is important to have clarity and consistency on the application of the rule.”

Former players have also criticised the lack of clarity around fixture postponement and rearrangement, suggesting that some clubs are abusing the rule to gain an edge.

“What started out as postponements due to a pandemic has now become about clubs not having their best team,” tweeted former Manchester United and England full-back Gary Neville.external-link

“This is not an Arsenal thing… Every team in the Premier League would look after themselves and if they say they wouldn’t then they’re lying,” former Manchester City and England full-back Micah Richards told Sky Sports.

Ex-Liverpool and Newcastle midfielder Dietmar Hamann compared the situation in England to his native Germany,external-link

where champions Bayern Munich had nine players out with Covid, but named a matchday squad without any Bundesliga experience on the bench for their loss to Borussia Monchengladbach.

Leeds had seven players injured before kick-off at the London Stadium, while last season’s top scorer Patrick Bamford missed the game for the birth of his child and centre-back Diego Llorente was suspended.

However, the lack of Covid cases made them ineligible for a postponement.

Another two players were injured during the match, forcing manager Marcelo Bielsa to draw on a bench made up largely of teenagers on the way to victory. Can’t stretch to a Taycan? A super light Porsche...

Duterte on Putin: “I kill criminals, I don’t kill...

She Buried Their Bodies

Finally, a Good Use for NFTs: Preserving Street Art

‘Immense’ Tuilagi ready to return for England against Wales

Kansas researcher to mount defense over China ties at...

Documentary to be released on Gabby Giffords’s recovery from...

Q&A: Becky G unveils every side of herself in...

Will These Trials of 2021 Make a Difference? (Podcast)

Here’s My Number: How Carly Rae Jepsen’s ‘Call Me...

Virginia Gov. Glenn Youngkin, others sound off as Democrats...

Could this 21-year-old be about to become Scotland’s most...

The best gaming desks at Amazon, Walmart, Wayfair and...

Be My Biometric Valentine (Audio)

This laptop from 1989 can mine Bitcoin, but it definitely won't make...