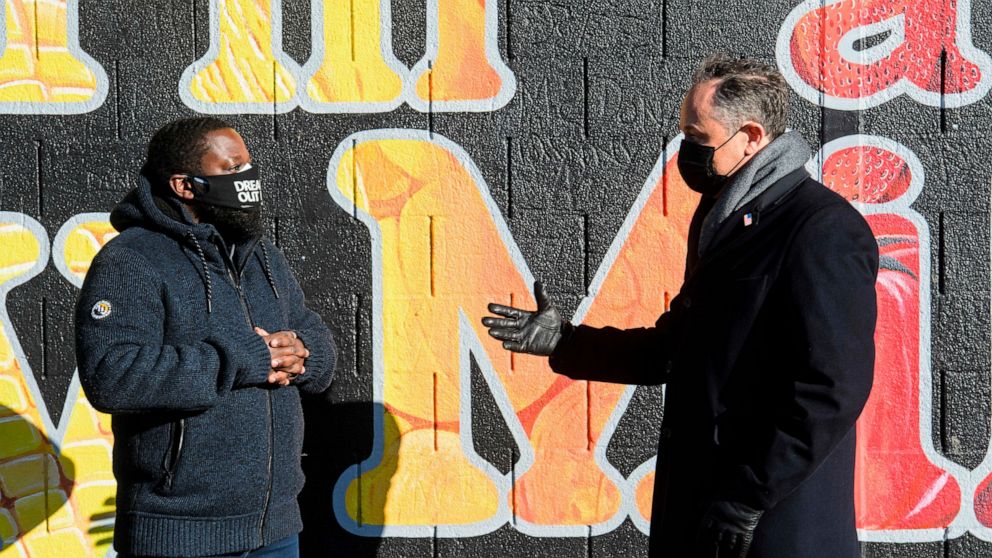 WASHINGTON — As Americas first second gentleman, Doug Emhoff has attended a U.S. naturalization ceremony in New York, dished up spaghetti and chocolate milk to kids at a YMCA near New Orleans and reminisced with second graders in Detroit about an early job at McDonald’s.

Emhoff visited 31 states over the past year, meeting with doctors, parents, community leaders and small-business owners everywhere from Albuquerque, New Mexico, to Allentown, Pennsylvania. The most important part of such trips, though, may be making it home in time for dinner, when his wife, Vice President Kamala Harris, will toss out that evergreen conversation starter, How was your day?

It gets me to really talk about the folks I meet, Emhoff told The Associated Press. He added that if he’s “with the president, first lady, or a Cabinet secretary or one of their chiefs you really do, you really can bring specifics back and turn that into a response or action.

After Emhoff met BB Beltran, an advocate for domestic abuse survivors, during an April visit to Oregon, she was later invited to participate in a federal roundtable on how the government can better support legal aid initiatives.

Emhoff, 57, sees himself as a conduit between Americans and President Joe Bidens White House. His training as a lawyer, he says, taught him the value of listening over talking and really trying to understand issues, understand people and understand a problem.

It’s meant taking a role that has been largely ceremonial the seconds rarely get much attention and making it more substantive, trying to buoy the administration from a nonpolitician’s perspective.

Being a link between the administration and the public is a quietly powerful role commonly played by first ladies. Kate Andersen Brower, who has written books about presidential spouses and about the vice presidency, said that during the 1980 Iran hostage crisis, when President Jimmy Carter halted campaigning for reelection, his wife, Rosalynn, traveled the country in his place and people would come up to her all the time and tell her about their problems.

Second ladies have sometimes gotten in on the act, as well. Pat Nixon helped organize schedules for her husband, President Richard Nixon, and gave input on speeches when he was vice president. Barbara Bush logged more than a million miles outside Washington and reported back to then-Vice President George H.W. Bush.

People always talk about pillow talk, Andersen Brower said. This is kind of a different side of it — seeing a man play that role.

Emhoff says he understands that I wouldnt be here if the country hadnt elected the first woman vice president. And he stresses that men need to step up and better support their spouses careers.

So many women have had to, unfairly, take a step back in the workplace because of COVID, Emhoff said. He said he wants not only to speak about it, but to, hopefully, set an example of somebody who stepped away from their primary career to support my wife.

Born in Brooklyn and raised in New Jersey, Emhoff was a Los Angeles-based attorney specializing in entertainment and intellectual property law who earned nearly $3 million in 2019, before leaving his job pre-Inauguration Day. He and Harris have two grown children from Emhoff’s previous marriage, and the second gentleman now teaches at Georgetown Law School.

Emhoff said that nearly a year in his post has taught him that the role I have is more of a generalist, where Im going to just go where needed.

He has traveled most frequently to COVID-19 vaccination clinics, visiting more than 20. During a March trip to Marys Center, a community health facility in Silver Spring, Maryland, outside Washington, he calmed a woman nervous about being vaccinated, speaking to her briefly in Spanish and smiling broadly behind his mask.

Emhoff was interested in the process. You could tell it wasnt just for show, said Dr. Tollie Elliott, the centers CEO.

Its just really nice to see, when you meet people in those spaces, that theyre human, that theyre genuine and theyre not there just for a picture or for political gain, Elliott said.

Emhoff has also been active in combating misinformation surrounding the coronavirus vaccine after hearing Americans tell him falsehoods.

This wasnt necessarily political. These were folks of all different stripes who were coming back to me with just pure misinformation, said Emhoff. He said he approaches pushing back on mistruths like preparing for legal cases.

Emhoff says he has seen vaccine misinformation evolve from misconceptions about costs and availability to claims focused on vaccines causing health problems despite a year of data now refuting that. The most persistent misinformation is people thinking COVID-19 vaccines were developed too quickly to be effective, even though they derived from years of research, Emhoff said.

No, he said flatly of the mistruth, that is not the fact.

Shortly before Christmas, Emhoff joined Murthy and first lady Jill Biden in visiting a childrens hospital near Waukesha, Wisconsin, where a man drove an SUV into a parade, killing six. Murthy said Emhoff approaches such moments thinking about his role as a father and as a husband, and then he draws his empathy from his identity.

You can talk to him like you would talk to anybody else, Murthy said.

Emhoff said that his dinner conversations with Harris often focus on everyday issues, adding that they try to ignore the political criticism the vice president has faced over things such as U.S.-Mexico border policy and the departures of several top aides from her office.

She pays it no mind, Emhoff said of his wife. The couples biggest evening challenge, he said, is sometimes settling on what to watch on Netflix especially when there are so many choices that they never actually make one.

Emhoff said the couple will finally think, We should watch that.”

And then we realize its getting late, and weve had a long day, and weve got a big day tomorrow, he said, “and we just dont watch it.

Revenge of the Hedge Funds (Podcast)

WD, Kioxia scrap loads of flash memory due to...

The Nigerians hoping to check out of their country

Green Party to focus on lowering energy bills in...

What to know about “rebound” in COVID symptoms after...

They survived a mass shooting at their California high...

Iran Says Oil Sales Have Had a ‘Staggering’ Rise...

‘Dislike Two of My Children’: Shock As People Share...

If Hunter is indicted, it could open a ‘whole...

Tennessee man on the run after shooting police officer:...

The trust company — an old tool for a...

From the cafe waitress to its teenage owner

Abu Dhabi inquiry under way - whose job is on the line...

Andriy Shevchenko sacked by Genoa after two months in charge