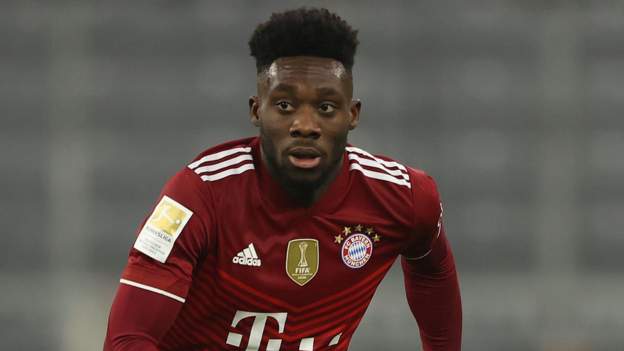 Davies has won 30 caps for Canada

The Canadian, 21, has not played since 17 December after contracting Covid-19.

“During our follow-up examination that we do with every player that has had Covid-19, we detected signs of mild myocarditis,” said Nagelsmann.

“He has stopped training for now, so he won’t be available to us for the next weeks.”

Myocarditis is an inflammation of the heart muscle which can reduce the heart’s ability to pump blood and can cause rapid or irregular heart rhythms.

Davies has made 107 appearances for Bayern since signing from Vancouver Whitecaps in 2018, helping them win three Bundesliga titles and the Champions League in 2020.

“This myocarditis isn’t too dramatic based on the ultrasound, but more simply signs of an inflammation. Nevertheless, it needs to heal and that will no doubt take some time,” said Nagelsmann.

On 5 January Bayern said Davies was doing “well” after testing positive for Covid.

Nine Bayern players tested positive at the start of January after time away following the Bundesliga’s winter break. Video of Putin Being Kept Waiting by Erdogan Goes...

Zelenskyy’s ‘Servant of the People’ satire series could land...

2 men arrested in probe of boy’s killing in...

Community health centers: One year of vaccinating the nation’s most...

Maryland voters head to the polls for primary day

Do Ukrainians and Russians believe a full-scale war is...

Hawaii to lift last US state mask mandate by...

Stars of ‘ZOMBIES 3’ Set Sail Aboard the Disney...

America has taken its eyes off the ball on...

France goes to the polls as Macron battles left...

Women’s Super League: ‘We saw so many jumping on...

Weeks of triple-digit heat spark wildfires in Texas as...

watchOS 9: what we want to see

Logitech unveils its most advanced generation of business devices

Ukraine roundup: No let up in fighting as Orthodox...

How Prince Harry’s Polo Team Name Honored His Most...